While the name Irwin Winkler may not immediately be recognizable, the venerable Hollywood producer has had a hand in midwifing a number of classic films, often alongside his late partner Robert Chartoff. Together Winkler and Chartoff produced such films as Raging Bull, The Right Stuff and They Shoot Horses, Don’t They? The duo was also responsible for giving a nearly penniless and practically unknown Sylvester Stallone a shot with Rocky and taking the ride along with the fledgling screenwriter/movie star through the subsequent sequels to some degree. All this and more is recounted in Winkler’s forthcoming memoir, A Life in Movies: Stories from 50 Years in Hollywood. Pulled together over the course of a year, Winkler explained how the project came about as an answer to questions about what he actually did for a living.

“What happened was that over the years people kept asking me what a producer does, especially friends who I knew weren’t in the entertainment business. Even some people that were in the movie business would ask what a film producer does. So I started making notes of what was happening day to day on some of the movies I was involved with,” he explained. “I decided at some point to do it as a narrative and turn it into a book, so there you are.” 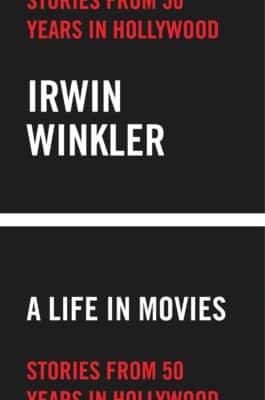 Given that he was drawing from a journal he’d kept over a number of decades, the Brooklyn native found turning the book around to be a rather breezy endeavor. The combination of thorough notes and an equally sharp memory draws a compelling chronological narrative that traces Winkler’s initial break, working his way up through the William Morris mail room and getting his first production break via the 1967 Elvis Presley film Double Trouble. The budding film executive came into the business at a unique time—just as the old studio system was on its last legs and a new class of directors that included Martin Scorsese, Francis Ford Coppola, John Boorman, Peter Bogdanovich, Brian DePalma and Steven Spielberg,were redefining filmmaking. For the most part, Winkler enjoyed his walk down memory lane.

“It took me about a year to write the book, which I think was pretty fast. But I think it was because I had all those notes to refer to. I wanted the reader to see what the notes looked like. There’s a section in the book where I went from producing to directing Guilty By Suspicion, where I kept those actual notes in the book, so you could see what it looked like originally,” he said. “It wasn’t challenging because I had a good time doing it. There were a couple of times when I was in pain when I had to remember what I went through on some films. I think Valentino was a very difficult film and I was unhappy with it. Revolution was a very difficult film. Those times were a bit painful, but obviously, there were many joyous moments in making films.”

While A Life in Movies is a juicy read, it is less about salacious detail and more what goes on behind the scenes of trying to get movies made. To Winkler’s credit, the end part of the book has a section dedicated to projects that never made the leap to the silver screen. Among them are movies about the relationship between lyricist Billy Strayhorn and Duke Ellington, a Ray Bradbury adaptation of Shakespeare’s The Tempest and a biopic about famed Hollywood choreographer Busby Berkeley. For Winkler, it was about maintaining the thread of honesty that runs through his memoir.

“I didn’t want to look like everything I did came out okay and was successful, because they certainly weren’t,” he said. “Many things, for whatever circumstances, never got made and I thought I should include that in the book.”

At the upcoming Cinema Arts Centre event, the self-described “nice Jewish boy from Coney Island” is looking forward to meeting with the numerous cinephiles that will undoubtedly be in attendance.

“I hope they ask me some interesting questions and I can give them some half-decent answers. I think it might be an opportunity for the audience to delve a little deeper into some of the questions they may have about what I may actually have accomplished or did from time to time,” he said. “Frankly, the whole book, as it should be, is from my point of view. I’m curious to find out what people, who are the general audience, would think about certain things that I wrote about.”

The 87-year-old film exec shows no signs of slowing down. He is at various stages on numerous projects over the remainder of the year including The Irishman, the Netflix-backed project helmed by old friend Scorsese and featuring numerous actors from that world including leads Robert DeNiro and Al Pacino. Also on tap is Creed III, to be directed by title actor Michael B. Jordan, and also a Gershwin project that’s been languishing for the past three decades and is currently on the Winkler front burner. It’s what keeps him getting up in the morning.

“I still get the kick out of making movies, coming up with something fresh and different and the new ideas and a new way to do an old idea. I’m still excited by it, so I guess that’s why I’m still making movies,” Winkler said.

Irwin Winkler will be appearing on April 29 to discuss his book A Life in Movies: Stories from 50 Years in Hollywood as part of Long Island LitFest. The event will be held at 7:30 p.m. at Cinema Arts Centre, 423 Park Ave., Huntington. For more information, visit www.cinemaartscentre.org or call 631-423-7611.