An Inn To Write Home About

The fall and winter season in Vermont is a blissfully quiet and incredibly peaceful time to visit. If you are heading into the Lake Champlain reason, consider resting your head at The North Hero House Inn and Restaurant. It will, without a doubt, be one of the most unique places you will ever stay at.

Walter Blasberg is the owner and innkeeper of The North Hero House Inn and knows a great deal of history about the area. He is usually at the inn for dinner on the weekends and lives not too far away, so if you can catch him for a story about Lake Champlain’s history, take a listen,

“They are called the Hero Islands because when the Green Mountain boys took the canons from Fort Ticonderoga down to Boston during the Revolutionary War, they came back and stayed in Vermont,” said Blasberg during a pre-dinner chat. “They gave them property in the islands, so they became the revolutionary hero islands of north and south hero. That’s how the islands got their name.” 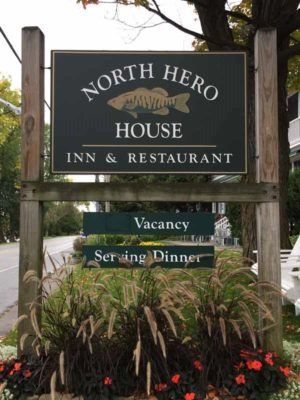 Blasberg said that North Hero, where the inn is located, became a shire town with a courthouse, sheriff’s office, jail and general store, which is still operating as the Hero’s Welcome General Store where guests can go for a taste of local culture.

“The North Hero House Inn was built in 1891 and was very popular as a summer resort and farming community back then,” said Blasberg. “The Dodds family that built the inn came from Scotland and owned the building until 1969, when a dentist from New Jersey bought the inn. He owned it until 1985, when he sold it to another couple from New Jersey until they lost it to the bank in 1996. I bought it in 1997.”

Blasberg said that the Inn underwent major renovations including new electric, plumbing, and refurbished ceilings and floors. All of the furniture was sold and replaced with newer antiques. Today, guests can stay in the Homestead, Southwind, Cove House and Main Inn buildings. We stayed in the Southwind Suite, which overlooks the water and is unique because it was originally a courthouse with a jail downstairs. And you guessed it, the bars are still on the windows below the building.

“No room is the same, and it’s a very quaint Vermont inn; not cookie-cutter at all,” said Blasberg, who has been coming to Vermont for years and has another house on an island in the middle of Lake Champlain. “Our most popular season is summer, with July and August having the highest occupancy. We also do Thanksgiving, New Year’s and Valentine’s Day.”

Another unique feature to North Hero House is the popular Murder Mystery dinners. Blasberg works with the October Theatre Company and a director who writes the murder mysteries, and 8 or 9 actors who act out the skit during dinner. 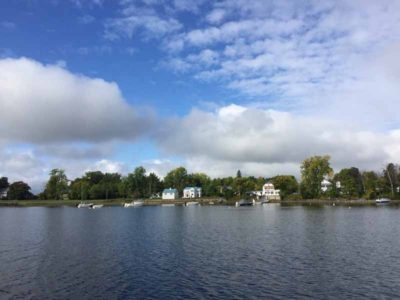 “Essentially someone gets murdered at dinner and it’s up to the audience to figure out who did it. We place clues for the murder in different island establishments and they have to find the clues and solve the murder,” said Blasberg adding that prizes are awarded. “We do the weekend ones once or twice a year, but the regular murder mystery dinners, we’ve done about six last year. Our most recent one was on Nov. 26.”

While it may seem like an unknown accommodation, North Hero House has seen the likes of many celebrities including Robert Redford, Steve Forbes, Ethan Hawke and Uma Thurman.

“We’re an historic country inn with 26 rooms, great hospitality and great food,” said Blasberg, who received the Innkeeper of the Year Award in 2015. “Everyone is friendly and it’s just a nice place to come and visit.”

Other places to stay:

The Best Western hotel chain has served families in the mid-scale market for years. Waterbury’s accommodation has beautiful mountain views as it sits on the side of the mountain range. A unique feature on the grounds is the covered bridge, which is made from rescued wood. Employee Matt Brown said that prices are about $100-$199 per night, depending on what’s going on in the area at a given time. Popular times of occupancy is from November through February.

With its central location to restaurants, shops, breweries and Echo Lake Aquarium, there’s no better place to stay in Burlington. Contemporary decor matches the vibe of the city and no matter what room you stay in, no view is a bad view.

Check out Long Island Weekly‘s thorough travel guide to Burlington, Vermont, including activities and a feature on Palmer Lane Maple.

Previous articleMartha Stewart Says: ‘Eat Your Vegetables’
Next articleCozy Up With A Winter Book