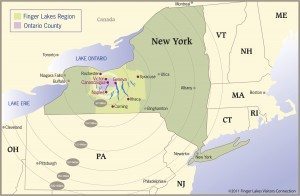 When a buddy of mine told me last fall that he and his wife were moving from a prestigious North Shore Nassau village to the Finger Lakes area, I was a little perplexed. Now his hands are so full sorting out all the local wines, craft beers, atmospheric taverns and rocking live music scene that he’s going to take up writing about it all in an online guide.

The 11 “Finger Lakes” are indeed finger-shaped and run north-south inside a triangle formed by Rochester, Syracuse and Ithaca. For tourism purposes, the region runs from Lake Ontario to the Pennsylvania border, taking in the old Erie Canal and “Mark Twain Country” (he’s buried in Elmira). It’s a hearth of resistance and civil disobedience: Harriet Tubman and the Underground Railroad, the Women’s Suffrage movement, Protestant revivalism and the Mormon Church were born or matured in the Finger Lakes. The region is dotted with museums, art galleries and good restaurants.

After years of careful growth and promotion, the Finger Lakes area is now one of America’s top “wine country” destinations, with more than 100 wineries concentrated around Lakes Cayuga, Keuka and especially Seneca (the Rieslings in particular are world class).

There used to be hundreds of cheese and butter factories in the region, and for a long time Central New York was where much of America got its hops for brewing beer. Now hops farms, cheese farms, microbreweries and distilleries are popping up again. A new culture of local family-owned artisan agriculture is growing.

Many residents think the Finger Lakes can find a new place in the world as a major international draw. Wine, food, music, history, scenery. The Europe of New York? And alongside peaceful Seneca Lake in the village of Watkins Glen, some of these residents are being arrested in peaceful protests, sometimes one or two dozen at a time.

The protests and the arrests have been going on for more than two years, mostly lost within the larger campaign against allowing hydraulic fracturing (“fracking”) of natural gas in Upstate New York. Governor Cuomo, after years of hinting otherwise, made the state’s ban on the practice permanent earlier this year, citing “significant health risks.” Even still, there are at least 40 natural storage and transport infrastructure projects in various stages of planning or construction across the state.

Crestwood, a Houston-based energy company, purchased an old salt mining company and a series of unlined, depleted salt caverns under Seneca Lake. It plans to reopen the caverns to store 2 billion cubic feet of compressed natural gas (methane) and 88 million gallons of liquefied propane and butane.

New York may not have active fracking, but Seneca Lake, which is 38 miles long, up to 635-feet deep and stocked with trout, also supplies the drinking water to more than 100,000 residents and businesses. Many are frantic. The salt caverns lie along fault lines and there is strong evidence that they’re already unstable (a rock four times the size of a Navy supercarrier fell from the ceiling in the 1960s). There are no evacuation plans, though using salt mines this way has lead to accidental deadly explosions (Hutchinson, KS in 2001) or giant sinkholes (Bayou Corne and Lake Peigneur, LA).

The company says it will bring jobs, and for those who do not grow wine, cheese, beer and the rest, that is the only offer on the table.

The state government must issue permits for underground storage of these petroleum products. Governor Cuomo’s agencies play with hands close to the vest.