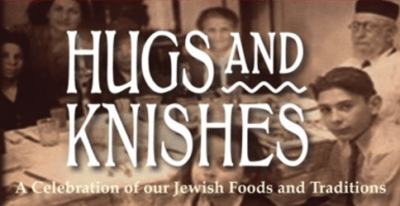 Great Neck native and 1977 Great Neck North High School graduate David Anton produced and directed Hugs and Knishes: A Celebration of Our Jewish Foods and Traditions, which airs on Channel Thirteen on Thursday, Dec. 8, at 9 p.m.

Featuring David’s mother, Ruth Seif, of Great Neck, and David’s father, Rabbi Marvin Antosofsky, Rabbi Emeritus of Temple Or Elohim in Jericho, the program explores the rich history of Jewish food and its cultural impact on the community. The film visits a cross section of Ashkenazi and Sephardic homes for anecdotes of Jewish life that represent a diverse experience and demonstrate the universal cultural truth that “we are what we eat.”

Hugs and Knishes invites viewers around the table for great stories and recipes, from the youngest children learning how to participate in the Passover seder to one of the last remaining links to American Yiddish theater, actor Fyvush Finkel, who passed shortly before the film’s distribution. While Finkel, actress Tovah Feldshuh and former New York City Mayor Ed Koch are the most recognizable faces getting nostalgic over memories of both literal and figurative schmaltz, it is the interaction of elementary school children at a senior center’s intergenerational baking event or sisters recalling a grandmother’s approval of their holiday efforts that highlight what is at the program’s core—food as a link to the past and a hope for the future to maintain tradition. As a young boy lamented, “If we don’t know these things like how to make food, they’ll get lost.”

Throughout the program, Anton—whose family heritage includes three generations of cantors and rabbis—blends clips of home life, holiday gatherings and history like the ingredients of a favorite grandmother’s Shabbat chicken soup. Like that weekly delicacy prepared in homes around the world, these elements reflect a community’s collective memories as recipes are prepared step-by-step on screen.

Hugs and Knishes celebrates the role of food in a family’s history. Koch talks about his mother’s use of chicken neck meat as a cure for a cold and how rendered chicken fat solves even the worst cook’s mistakes; a young family prepares cholent, a traditional Jewish stew for the Friday Shabbat meal; a grandfather takes pride in his grandchildren’s delight in his year-round preparation of matzoh brei; and sisters reminisce over the memory of kreplach stuffed with chopped liver.

While the film focuses on food, Finkel and Feldshuh sprinkle their interviews with the Yiddish melodies of their childhoods—and Finkel recalls that food was even the inspiration for song and comedy on the Lower East Side.

Hugs and Knishes demonstrates that no matter what kind of Jewish life an individual chooses to live, the generational continuity of kasha varniskes, stuffed cabbage, gefilte fish and knishes are one way, as Feldshuh says, to alleviate a culture’s “fear of disappearing.”