Ritchie Blackmore’s version of the Great Resignation came about 25 years ago when he decided to hang up his rock and roll shoes and chose to pursue his passion for Renaissance music with spouse Candice Night in Blackmore’s Night. Gone were the Stratocasters and Marshall amplifiers and in were centuries-old instruments like nyckleharpes and hurdy gurdys along with a deep dive into music of the 15th and 16th centuries.

With the duo of Blackmore and Night serving as the constant in Blackmore’s Night and its revolving line-up of musicians, the journey began with the 1997 debut Shadow of the Moon which included compositions by Renaissance era composers like Pierre Attaingnant and Tielman Susato along with a number of originals and a cover of contemporary Swedish outfit Rednex and their 1995 ballad “Wish You Were Here.” A quarter of a century later, the Mount Sinai-based couple are dusting off Nature’s Light, the band’s eleventh studio album.

Eight Blackmore/Night compositions make up the record’s 10 cuts along with a reworking of the aforementioned Rednex song and a cover of Sarah Brightman’s “Second Element.” And while it would be natural to assume this was a pandemic record, Nature’s Light was actually recorded right before the pandemic hit at a time when the duo was going through a lot of pain and loss. Night’s 80-year-old father was diagnosed with cancer back in 2018 and passed within a year, while Blackmore’s brother succumbed to chronic obstructive pulmonary disease (COPD) at the same time. Going into a project like this was understandably a difficult endeavor for both artists. 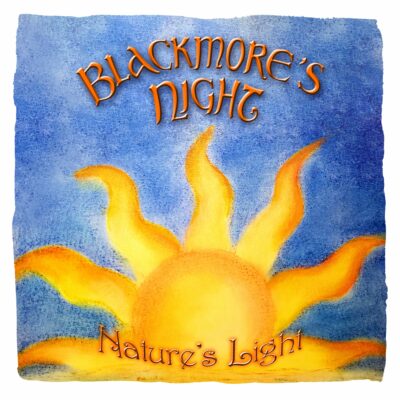 “In the year 2018 when we went into the studio and had our producer come out from Los Angeles to record all of these songs, it was a very dark and difficult year for us,” Night shared. “The closest people to our hearts left and there were these big dark holes in our souls. Before we went into record, I know I was at the point where I didn’t feel like singing. I felt empty and a great sense of loss. I didn’t feel creative, joyous and able to emote in vocal range or to write. I just didn’t have that in me. I felt like a ghost of myself. I decided at that point that maybe the best way to get over my deep sadness was turning it into something I could write about. That’s always kind of saved me in a way whether it’s writing in journals or songs. Ritchie came up with this melody line and I came up with the idea of what the symbols and signs my dad was giving me and created this song called ‘Feather In the Wind.’ That kind of brought me to the other side of being able to start being able to write again. By the end of recording the album, I was able to write lyrics and sing songs like ‘Nature’s Light’ or ‘Going To the Fair’ and find that sort of joy. It was very cathartic going through all these emotions. Meanwhile, at the end of it, the pandemic hit.”

Blackmore agreed that focusing on the creative process helped him navigate the pain he was experiencing at the time.
“I really believe that when one is suffering from grief, you should get really involved in your work so you can try and forget what’s going on,” he said.

The mood throughout the album is one of lightness and brings to mind tankards of ale being tossed back, peasant blouses, madrigals and the kind of fanfare you might hear in the court of a Medieval king. With the current range of fantasy-flavored series like House of the Dragon and The Lord of the Rings: The Rings of Power being all the rage, does the duo ever think their material might be a good fit?
“It is interesting because there are so many period pieces, whether it’s on television or films that come out and do so well,” Night said. “The irony is that the only time one of our songs was used was in a Jim Carrey movie called Yes Man and they used ‘Old Mill Inn’ at a party he was at.”

Blackmore added, “It’s funny, because I don’t follow that kind of thing. I’m more of a purist and want to be in the wood myself hearing a piece of music written in the 1500’s or 1600’s. I’m a little bit of a musical snob. There’s only one film we saw—Elizabeth, where they actually played three real Renaissance songs played in the correct manner with the correct instruments. Candy and I were jumping up and down in our seats, at least I know I was. I was thrilled by the fact that they’d taken the chance to play it as it was supposed to be played. But it’s very seldom that you’ll hear these songs or melodies played in the correct manner.”

And while fans of Deep Purple and Rainbow might wring their hands at not being able to hear Blackmore wring out massive power riffs, he’ll give a quick nod to his plugged-in days via numbers like the re-recorded instrumental “Darker Shade of Black” and its Bach-flavored nuances. As someone who was constantly touring since he was 16, the septuagenarian Rock and Roll Hall of Famer is very content with his current creative station in life.

“I’m not really interested in the modern approach with modern instruments,” he admitted. “We use synthesizers on certain things, but they are there to see how we’re going to progress with the other instruments. It’s all about going back to the basics—simple music. Melody is very important to me. It’s an important thing. That’s why, even in Deep Purple, towards the end, before I left, our music was a bit monophonic. There wasn’t too much melody and if I don’t hear a melody, I can’t be inspired. I find that with a lot of hard rock bands today—not the death metal or whatever—the melody is certainly not there and I can’t relate to that.”

Many of the instruments both Ritchie Blackmore and Candice Night play are hundreds of years old and not something you’re going to run across in the average music shop. Here’s a quick run-through of the ones more frequently used by Blackmore’s Night in the studio and on stage.

Hurdy gurdy
Sounding like a bagpipe, this stringed instrument dates back to somewhere between the ninth and 11th centuries and creates sound via a hand-crank-turned, rosined wheel that rubs up against the strings and works like a bow in producing single notes.

Mandola
This stringed instrument is to the mandolin what the viola is to the violin and evolved from the lute.

Nyckleharpe
As the national musical instrument of Sweden, the nyckleharpe is a chordophone, which means it produces sound from vibrating strings not unlike a hurdy gurdy, which also uses key-actuated tangents to change the instrument’s pitch.

Domra
A long-necked Belarusian, Russian and Ukrainian folk string instrument of the lute family with a round body and three or four metal strings that dates back to 1530.

Cornamuse
A double reed instrument dating back to Renaissance times that has a windcap over the reed and a closed bell.

Shawm
A double-reed woodwind with a flared bell not unlike a trumpet made from a single piece of wood that was eventually superseded by the oboe family.

Rauschpfeife
German for rush or reed pipe, this wooden double-reed instrument was used in the 16th and 17th centuries and requires a player to blow into a slot in the top of the windcap to produce a sound.

Crumhorn
Another double reed instrument with an upward-curving end that produces an even, nasal sound.