In the centuries-old lore of Chinese food traditions, there is one dish that soars above all others. Crisp, amber-hued and unctuously fatty, Peking Duck is a legendary Chinese dish and easily tops last-meal lists the world over.

China has roasted duck since the Southern and Northern dynasties in the 400s, and the official Peking Duck dish was fully developed later in the Ming Dynasty, when it was one of the main dishes on imperial court menus. In the United States, National Peking Duck Day lands on Wednesday, Jan. 18. Throughout Flushing, Queens and Manhattan’s Chinatown, ducks at various stages of roasting are seen hanging in eatery windows, gently luring in foot traffic with shiny skin and deeply nuanced aromatics.

The flavor is characterized by rich, oily meat paired with crisp, spiced skin. It is often eaten with scallion, cucumber and a bean sauce rolled in a Chinese pancake.

Those flavors might have also had a hand in diplomacy. Prior to President Richard Nixon’s visit to the People’s Republic of China in 1972, the two countries shared a foul relationship.According to legend, it was Secretary of State Henry Kissinger’s love of Peking Duck that jump-started the road to a detente. 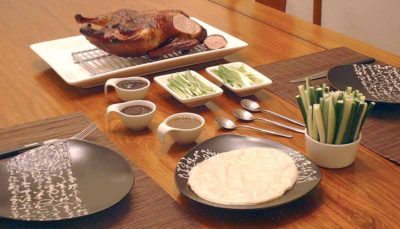 As the story goes, Kissinger met Chinese Premier Zhou Enlai in the Great Hall of People during a secret visit to China in July of 1971. After a morning of frustrating, inconclusive talks, the delegation was served Peking Duck for lunch. Enlai, in a show of
hospitality, schooled Kissinger on how to properly roll the slices of meat and skin in Chinese crepes. The dish instantly became an obsession for Kissinger and the very next day, the Americans and Chinese issued a joint statement inviting Nixon to visit China in 1972.

What Kissinger learned on that pivotal day in world history is a culinary lesson that continues to be revealed to novice eaters—Peking Duck, with its mind-altering succulence, has remained one of the most desired foods for centuries and truly has the power to mend decades-old divides between once-political adversaries.

A Taste Of China 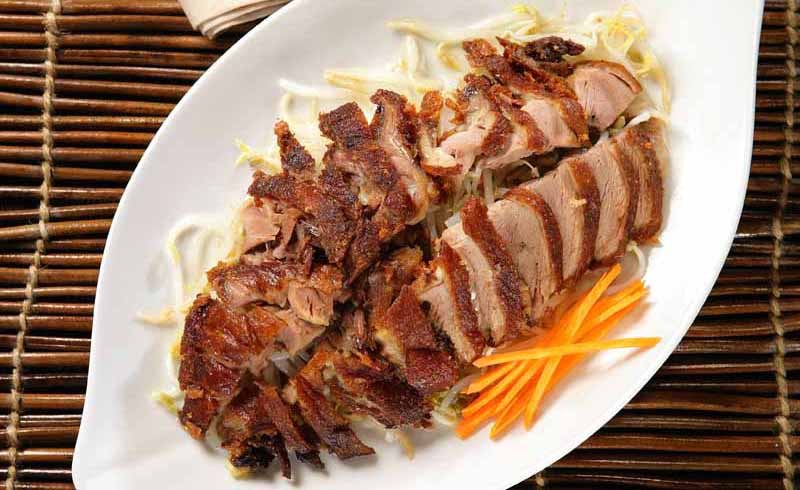 Eager to have your own Peking duck dinner at home? Follow this delicious recipe, courtesy of Ching-He Huang, host of Easy Chinese on the Cooking Channel.

1. Prick the duck all over with a small knife or fork, then pour hot water over to rinse.

2. Discard water and place duck on a rack in a roasting pan. Pat dry with paper towels.

3. Sprinkle duck with salt and pepper and leave in roasting pan until ready.

4. In a small bowl, mix together the honey, six tablespoons water, five-spice, soy sauce and brown sugar. Brush the duck inside and out. Let dry for 10 minutes and repeat until all but 4 tablespoons of glaze remains (reserve this glaze). Let glaze marinate on duck overnight, uncovered in fridge.

5. Preheat oven to 350 degrees F and cook duck for 45 minutes. Flip over and baste with reserved glaze; cook until skin is crisp and golden brown, another 45 minutes. Check halfway through. If duck is getting dark before the halfway point, turn down heat and lower rack in oven. When the duck is cooked, remove from oven and let rest.

6. In a small bowl, prepare sauce by mixing cornstarch with 1 tablespoon of cold water and set aside.

8. Carve and slice the duck. Place a teaspoon of the sauce in the center of each pancake, add slices of duck, garnish with scallions and cucumbers and serve immediately.