A Different Look At World War II: The Prisoner’s Wife...

Not So Sweet: New Book Identifies Hidden Sugar And Healthy...

“Optimism is cowardice.” So claimed Oswald Spengler on the final pages of his 1931 polemic, Man and Technics. With the publication of Christopher Caldwell’s...
Read more
Arts, Music & Entertainment

Literary Chicago: A Haven For Hustlers And Swindlers

Chicago, Carl Sandburg’s “city of big shoulders,” is not necessarily thought of as a literary city. As home to the famous Poetry magazine and...
Read more
TOP STORIES 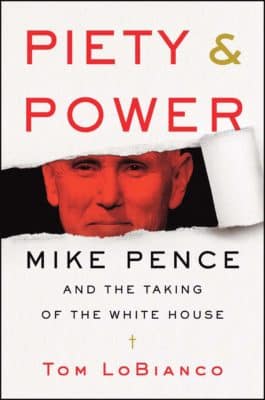 Did recent history turn on a flat tire? Tom LoBianco, author of Piety and Power: Mike Pence and the Taking of the White House, thinks so.

By June 2016, Donald Trump had secured the Republican Party’s presidential nomination. Running mate selections were down to Newt Gingrich, Chris Christie and Pence, then-governor of Indiana. Trump’s oldest daughter and her husband preferred Gingrich. The nominee wasn’t so sure. Christie bombarded his friend with text messages. In early July, Trump was in Indianapolis for a fundraiser, headed towards another one in California. Pence was set to fly to New York for an interview with the Trump family. A tire on the Trump private jet was flat. He spent the night in Indiana. There, the Pences invited the Trumps to dinner at the governor’s mansion. Pence played hardball on the vice president question. He wouldn’t be a hatchet man, but he worked with lawmakers to get bills passed. Pence, unlike Christie, didn’t campaign for the job, impressing the future president.

This biography is not laudatory. Nor is it a total hatchet job. It does ridicule the fundamentalist movement that Pence has long been associated with, and it will be used by future foes of the vice president.

It also reveals a prudent man who keeps his cards close to the vest. Pence and his wife are a couple who believe in the power of prayer. LoBianco isn’t impressed. However, those morning devotionals pay dividends. Now 60, Pence has been a member of Congress, a governor of Indiana and vice president of the United States. And the story isn’t over.

Pence was not born into an evangelical family. His life transformed from a Democratic Party/Roman Catholic church household into a Republican Party/evangelical adulthood. During the Reagan ’80s, he made the switch to the Republicans. In both 1988 and 1990, he ran losing campaigns for an Indiana House of Representatives seat. The man was restless. Prior to the 1990 run, President George H.W. Bush caved in to a tax increase. Pence and numerous Republicans were doomed. In 1992, Pence supported Patrick J. Buchanan’s insurgent primary run against Bush. The next year, he heard a lecture by Russell Kirk, the prolific conservative author. (Kirk, too, supported Buchanan in 1992.) Kirk’s masterpiece, The Conservative Mind, became Pence’s favorite secular reading.

Pence’s style is closer to Kirk’s reformist approach than to Buchanan’s combativeness. Is Mike Pence a Trump Republican? A free trader during the 1980s, Pence has swung around fully to the protectionist camp. On immigration, Pence, as a congressman, took plenty of heat for supporting undocumented immigrant amnesty. Here he is not Trumpian. On foreign policy, Pence tries to split the difference, maintaining that America must lead the world while endorsing the boss’s America First doctrine. On social issues, the man is to the right of Trump, being influenced by left-leaning offspring. LoBianco maintains that Pence is fully aware of the nationalist tide sweeping through the Republican Party electorate. 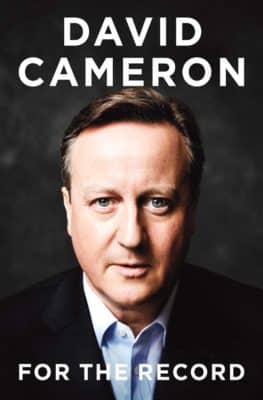 Someone who isn’t Trumpian at all is former British Prime Minister David Cameron. His autobiography, David Cameron: For the Record is a drawn-out apology for his administration, which ended with the triumph of Brexit, the United Kingdom’s stunning withdrawal from the European Union, in June 2016. For years, Cameron’s Tories were divided on the European issue. Margaret Thatcher opposed full European integration. Her party, however, had become pro-Europe. Thatcher’s long reign ended in 1990 on that same issue. For years, the Tories couldn’t make up their minds. Finally, Cameron, fresh off a re-election victory in 2015, decided to hold a nationwide referendum. The Remainers, which included leaders from both the conservatives and Labour Party, were favored. The Leave camp included the charismatic Nigel Farage, plus Boris Johnson, the former Tory mayor of London. Cameron lost his gambit and his job.

Cameron tried to be all things for all men. “[We] could become the party of economic competence and a first-class NHS (National Health Service); traditional values and equal rights; strong defences and a greener economy,” he maintained.

It all fell apart on the immigration issue. Cameron promised to decrease immigration into Britain to the tens of thousands rather than the hundreds of thousands. The Tories failed miserably, and opponents exploited that failure during the Brexit referendum. This volume is an attempt to make the author respectable among liberal society in London and New York.