Underdog Candidates Say Change Is In The Air 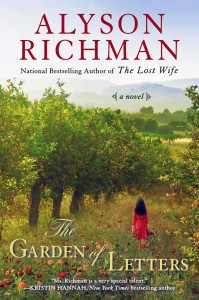 To kick off her national book tour, Alyson Richman is making the short drive to downtown Huntington from her Huntington Bay home.
Richman will be discussing, and signing, The Garden of Letters (Berkley Trade Paperback), her just-published fifth novel, at Huntington’s Book Revue on Friday, Sept. 12, at 7 p.m. Its opening chapter engages readers immediately and was based on a World War II anecdote she’d heard from a friend, something the Wellesley College graduate mentions in an author’s note.
In Richman’s fictitious re-telling of her friend’s tale, the 19-year-old Elodie Bertolotti is traveling in 1943 to Portofino, Italy, under an assumed name, and escapes the scrutiny of a German soldier when a man Bertolotti has never seen before calls out to her after she’d disembarked from a boat, shouting, “Cousin, Cousin!” The solder, believing the 38-year-old Angelo Rosselli was greeting a family member, allows Bertolotti to continue on her way.
“I was fascinated by the intersection of two strangers meeting that afternoon at the dock: one person [Bertolotti] who is on the run and has a secret, and the second figure who innately senses the other’s deep fear. From there, I began to imagine the two main characters in The Garden of Letters: Elodie, a woman in need of a safe harbor for reasons that unfold during the course of the book, and Angelo, the haunted doctor who desperately wants to help others because of his own tragic past,” Richman writes.
Without giving away too much of Richman’s gripping story, Bertolotti is an accomplished cellist who becomes an undercover messenger for the Italian resistance, which is initially working against Benito Mussoloni’s repressive regime. Mussolini’s July 1943 ouster as Italy’s head of state complicates matters because the anti-Mussolini forces must then concern themselves with Germany’s presence in Italy.
Rosselli has secrets of his own, dating back to Italy’s invasion of Ethiopia in the mid-1930s. While serving as a military doctor in that conflict, Rosselli repeatedly writes to his wife, who is expecting their first child, and this correspondence informs the book’s title. By the time Rosselli encounters Bertolotti, he has been back in Italy for about eight years and has a busy medical practice as well as a soft spot for people in trouble.

Richman’s historical research on the era is impressive. Indeed, she cites in the book’s acknowledgments Leon Weckstein’s 200,000 Heroes, a non-fiction work about the Italian resistance and the American OSS (Office of Strategic Services) working jointly to liberate Italy during World War II. The torture and murder of one of Richman’s fictional characters, at the hands of the German military, was based on the grim fate met by the real-life Irma Bandiera, according to Richman. In addition, the novelist visited a number of the Italian locales, and discussed with subject matter experts, many of the scenes cited in The Garden of Letters.
The talented author, who resides in Huntington Bay with her husband, Stephen, and their two children, built a sizable local audience after The Lost Wife, her fourth novel, was the 2012 Long Island Reads selection. Sponsored by the Nassau Library System and the Public Libraries of Suffolk County, the designation meant The Lost Wife was read simultaneously during that year’s National Library Week by book clubs and those who participate in public library events.
Long Island taste-makers were ahead of the curve. Relativity Studios announced last month it would produce a movie adaption of The Lost Wife. Relativity is releasing a motion picture based on Nicholas Sparks’ The Best of Me on Oct. 17. More details on Richman’s current book tour can be found at www.alysonrichman.com.