Financial viability was 100 percent dependent upon farebox revenues. They supported both development and economic growth of numerous neighborhoods in the boroughs of Manhattan, Brooklyn, Bronx and Queens. As part of the franchise agreement, the owners had to sign, City Hall had direct control over the fare structure. For a period of time, owners actually make a profit with a five cent fare. After two decades passed, the costs of salaries, maintenance, power, supplies and equipment would pressure owners to ask City Hall for permission to raise the fares. This additional revenue was needed to maintain a good state of repair, increase the frequency of service, purchase new subway cars, pay employee salary increases and support planned system expansion. Politicians more interested in the next reelection (and subscribing to the old Roman philosophy of free bread and circuses) refused this request each year, for well over two decades. As a result, in order to survive, owners of both systems began looking elsewhere to reduce costs and stay in business. They started curtailing basic maintenance, delayed purchases of new subway cars, postponed salary increases for employees, canceled any plans for system expansion and cut corners to survive.

In the 1930s, New York City began building and financing construction of the new IND (Independent Subway—today’s A,C,E,F & G lines). This new municipal system subsidized by taxpayers dollars would provide direct competition to both the IRT and BMT. Municipal government forced them into economic ruin by denying them fare increases that would have provided access to additional badly needed revenues. Big Brother, just like the Godfather, eventually made them an offer they couldn’t refuse. The owners folded and sold out to City Hall.
In 1953, the old New York City Board of Transportation passed on control of the municipal subway system, including all its assets to the newly created New York City Transit Authority. Under late Governor Nelson Rockefeller in the ‘60s, the Metropolitan Transportation Authority (MTA) was created. The governor appointed four board members. Likewise, the mayor four more and the rest by suburban county executives. No one elected official controlled a majority of the votes. 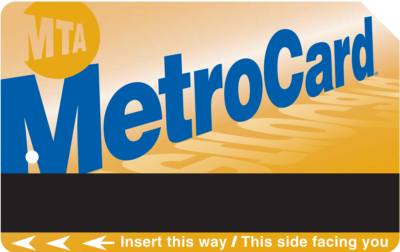 The MTA introduced Metro Cards in 1996. This provides free transfers between the subway and bus. It eliminated the old two-fare zones, making public transportation an even better bargain. Purchasing a weekly or monthly subway/bus pass reduces the cost per ride and provides virtually unlimited trips. In many cases, employers can offer transit checks to help subsidizes a portion of the cost. Utilize this and reap the benefits. It supports a cleaner environment. In 2021, NYC Transit completed introducing the next generation of fare collection. It is known as One Metro New York (OMNY). Installation of this new state-of-the-art system.is now available to riders at all 471 subway stations. .
New York City Transit has a fleet of 6,500 subway cars with 471 stations serving 5.5 million pre COVID-19 riders. More than three, million daily riders have returned. Service is provided on 28 routes, spanning four of five boroughs comprising New York City including Brooklyn, Bronx, Manhattan and Queens. Only the 500,000 residents of Staten Island have no direct subway connection to the rest of New York City.

The largest subway system in the world has benefited since the 1960s by grant funding provided by the Federal Transit Administration. Of the $1.5 billion in annual FTA funding provided to the MTA, New York City Transit usually receives a minimum of 70 percent or more than $1.1 billion. These dollars pay for various capital improvement projects which benefit riders. Since the Urban Mass Transportation Act was signed into law by President Lyndon Johnson in 1964, New York City Transit has received billions of dollars in federal assistance from Washington. This is a great example of your tax dollars at work.
Let us also give thanks to the thousands of hard-working men and women who maintain and operate our New York City subway system. It is the life line that keeps the Big Apple moving day in and day out.

Larry Penner is a transportation advocate, historian and writer, who previously worked for the Federal Transit Administration Region 2 New York Office. This included the development, review, approval and oversight for billions in capital projects and programs for the MTA, NYC Transit, Long Island Rail Road, Metro North Rail Road, MTA Bus along with 30 other transit agencies in NY & NJ.