On the 28-bed respiratory care unit at the Gurwin Jewish Nursing & Rehabilitation Center in Commack, one might not expect to see twinkle lights, champagne bubbles and a chuppa, but that’s just what the staff and residents saw when Nicole Hartstein and her then fiancé, Edward Guida, surprised Nicole’s mother, Jane Hartstein, with a wedding.

Jane, who was completely shocked upon seeing her daughter in her wedding dress, has been on a ventilator for more than three years, living at Gurwin for almost that long after a stroke.

According to Nicole, she and her fiancé wanted her mother to be part of their wedding, but knew she could not make the trip to the New Jersey wedding venue on Sunday, May 26. So instead, they decided to get married at Gurwin prior to their scheduled wedding and reception, officially changing their anniversary, if only for those in the know. 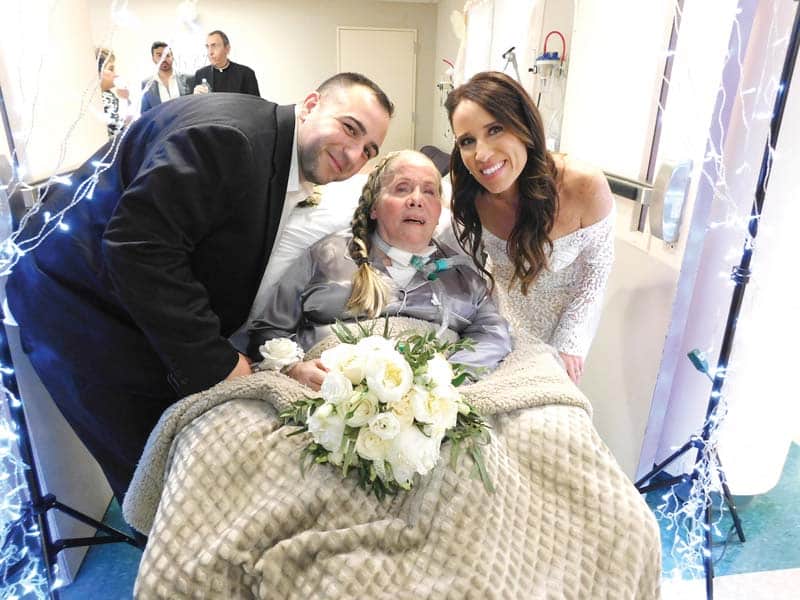 The wedding went on as planned at the West Mount Country Club in Woodland Park, NJ, (and Jane live-streamed it on her TV at Gurwin), but Nicole and Edward knew that the important ceremony had already taken place.

For that ceremony, Gurwin staff transformed the family room on the respiratory care unit into a wedding chapel, complete with lights, Mr. & Mrs. signs and tulle. And when Jane was wheeled in, she burst into tears, so happy to be able to share in her daughter’s joy.

“I know you wanted to be at our wedding, so we’re bringing our wedding to you,” said Nicole, hugging her mom before she took her place to walk down the makeshift aisle outside the family room.

“A Thousand Years” by Christina Perri played and staff and residents watched as Nicole was escorted by her uncle, James Jacobs, into the family room where a small group of her family, including her mom, waited with the priest and rabbi. Nicole beamed as the ceremony made her officially Mrs. Guida.

An eight-year relationship led up to this point, and Edward knew that his bride-to-be needed her mother to be at her wedding.

“I just want Nicole to be happy, and I want her mom to be happy, too,” he said. “We knew we wanted to do this.”

As the kiss was exchanged and congratulations were expressed, Jane sat watching the festivities.

“I can’t believe it,” she said, tearing up. “This is the best gift anyone could ever have given me.”