Dale Berra writes about being the son of a legend

Yogi Berra is one of the most iconic names in baseball. But while his achievements on the field and in the spotlight have been well-documented, Berra’s life as a parent has never been a major subject. Dale Berra, former MLB infielder and the youngest of Yogi’s three sons, thought it would be a good idea to write about his father from his perspective.

“He fathered the way he played the game of baseball,” said Dale. “He was completely innate and intuitive. He was so secure in himself and yet humble. That’s exactly how he raised my brothers and me, with a sense of ‘we’re not special’ because he didn’t think he was special.”

In his book My Dad, Yogi, Dale talks about the importance of family and how Yogi put his before anything else. He also touches upon the aspects of his father that he admired, especially how he treated everyone equally.

“He was totally colorblind in an era that it wasn’t fashionable,” said Dale. “Jackie Robinson and Roy Campanella would come up to me and tell me that my dad spoke to them since day one and never thought a thing about it. He wasn’t concerned about what the other players on his team and other teams thought. He raised us in the exact same fashion. We didn’t know that was significant at the time, but it shaped our lives.” 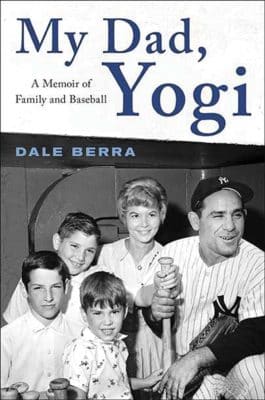 One of the memories that stands out most to Dale is the time his father helped him out of a struggle with drugs. Dale described himself as “obsessive and compulsive” as a kid. Growing up, he didn’t do anything more than drink a beer or two. In the 1980s, Dale said all his friends were locked in the bathroom trying cocaine. It was around him so much that he eventually tried it, and then began using it regularly.

“The fact that I couldn’t stop was my brain telling me I was OK and rational,” said Dale. “In reality, it took from me the skills necessary to play baseball at a high level. I hid all of that because of the values my dad taught me. I was never late for a bus or train. I never played while on it. My rationale was that I was OK and that I can use this drug without a problem.”

Dale said that Yogi, even when he found out about the drug use, never worried about himself or his own image. He was only worried about his son. Dale would say that he was fine and Yogi would believe him. However, it did come to a breaking point and Yogi eventually staged an intervention.

“When my dad spoke, my brothers and I jumped,” said Dale. “There were no questions. All he had to do is look at you with his eyes and you’d know who was in command. At the intervention, he looked at me with his eyes and said ‘I’ve heard some things. If you want to continue to be a Berra, you won’t do that anymore. If you want to continue to have brothers, you won’t do that anymore.’ That’s all he had to say and that was the end of it right there. I’ve been sober for 27 years now.”

The book dedicates time to describing Yogi as a father who wasn’t warm, but who loved his sons with all his heart. He encouraged his sons to learn baseball from each other instead of from him as he believed it would help them develop as players. Dale also had a chance to play for his father on the New York Yankees, albeit for a brief moment in time.

Beyond baseball, Dale talks about how the lessons his father taught him affected how he and his brothers live their lives today. From Dale’s early years to Yogi’s final years, My Dad, Yogi looks to celebrate a baseball legend as the great father he was.

“People used to scream from the stands ‘You’ll never be as good as your old man,’” said Dale. “You know how I would answer that? I gave them an OK sign and said ‘Well, not many will.’”

My Dad, Yogi is available now on Amazon and anywhere books are sold.