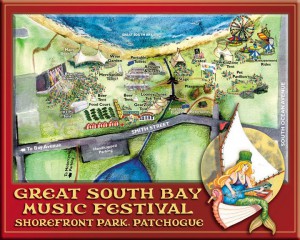 To kick off the eighth installment of the Great South Bay music festival, who better than Long Island’s own Taking Back Sunday? The five-member post-punk outfit led by guitarist Eddie Reyes and frontman Adam Lazzara will close off the first night of the festival, performing hits like “MakeDamnSure” and “Liar (It Takes One to Know One)”.While the band won’t actually perform on Sunday, this will be their only New York performance, making Taking Back Sunday a must-see for any festival-goers.

From its beginnings as an electronic side-project, spawned by Marc Brownstein and Aron Magner of the Disco Biscuits fame, Conspirator has really created a name for itself on the festival scene.However, it is not recommended that anyone go into the show expecting to see the Disco Biscuits Lite. Nevertheless, with Brownie and Magner on stage, Conspirator promises to be an act you don’t want to miss.

With the recent release of No Guts, No Glory, moe. has been busy with their international tour. Following its performance at the Great South Bay Festival, the band will be headed for Japan and then Germany for three performances before returning stateside for Gathering of the Vibes in Bridgeport, Conn. less than a week later.

Groove on over to the Jambalaya stage where multi-talented musician Zach Deputy will be rocking with his self-proclaimed style of “island-infused drum n’bass gospel ninja soul.” Deputy’s soulful songwriting combined with his funky rhythm makes his performance an act not-to-be missed.

Since 1992, the Laurie Berkner Band has provided family-friendly entertainment that is sure to move parents and children alike. From her quirky stage presence to her folksy yet informative lyrics, Laurie Berkner has become quite the iconic artist for the little ones. Berkner and company will open up Sunday’s festivities with a performance at noon on the Blue Point Brews Stage.

After the release of his Beatles cover album Empathy For the Walrus  last February, Zebra frontman Randy Jackson has been hitting plenty of venues in his band’s two strongholds–Long Island and Louisiana. Jackson returns for an acoustic set at the Great South Bay Music Festival’s Jambalaya stage at 7:40 p.m.

After topping the charts in 2000 with the smash“Absolutely (Story of a Girl),” Long Island-based band Nine Days has reunited with plans on cutting a new album and an embarking on an East Coast tour. For more on the band, their upcoming tour or some free songs visit ninedaysmusic.com

For the Swedish-born Osborne, the blues wound up enchanting him at an early age. After hitchhiking around the country at just 16-years-old, Osborne landed in New Orleans, where he would play in local clubs acquiring real knack for the music along with a following of fans. On Sunday, Osborne will be performing at the Blue Point Brews stage, undoubtedly dipping into material from his latest album, last year’s Peace.

Musical icon Grammy Lifetime Achievement Award winner King is a blues legend who needs no introduction. On Sunday, B.B. King and his lovely Gibson guitar Lucille, will be performing at the Blue Point Brews stage to close off the final night of the festival with a performance guaranteed to rock the house down.

Ancient Tongues are a hip-hop collective, comprised of five Long Island musicians who blend unique rhymes with live instrumentals to put on one hell of a show. While they have yet to make it really big, the group has shared a stage with the likes of hip-hop acts ranging from C-Rayz Waltz to DJ/sound designer  Amon Tobin. You can check them out on Friday at the Jambalya stage at 9:30 p.m.

It doe not get any more local then Patchogue’s own Funknasty, a lively bunch who live up to their name, playing a mix of funky, nasty tunes. Check them out on Saturday at the Clamshell Bandshell.

Don’t let the name confuse you, this rock and roll duo may sound like they hail from across the pond, but London Souls are far more local than its Brit-rock sound would lead you to believe. First making it onto the scene back in 2008, the New York City-based rock group has been hitting the festival circuit hard with several upcoming performances along the East Coast and Mid-Western region. London Souls will be hitting the Blue Point Brews Stage at 4:40 p.m.