Until now, art lovers in Nassau County with a penchant for gravity-defying sculptures have been limited to exhibitions in outer space. But between June 15 and Oct. 13, visitors at the Old Westbury Gardens will encounter 33 of Jerzy Jotka Kędziora’s world-renowned sculptures woven into the landscape—balancing on rods and ropes between earth and sky and water, emanating whispers of summer whimsy.

Kędziora’s statue “Man Crossing the River” has come to symbolize the Polish city of Bydgoszcz since it was placed there permanently to commemorate the country’s joining the European Union. When Maura Brush, director of horticulture at Old Westbury Gardens, discovered some of Kędziora’s pieces while on vacation in Miami, she knew that they would make the perfect temporary exhibition.

“They were graceful, they were elegant, and I felt an exhibit that would be harmonious with our landscape,” Brush said. “Jerzy’s exhibit will give our visitors a reason to look up and see the Gardens from a completely different perspective.”

The works showcased in Balance in Nature: Sculptures complement the Gardens’ topography, making adroit use of both natural and man-made features.

“I think we were practically made for this exhibit,” Brush said.

Brush described how the life-sized statues blend in with bridges and hill crests while still allowing viewers to appreciate their details, as well as their myriad facial expressions and contortions. Her favorite piece is a rower dangling from the branches of shipmast locust trees over West Pond, the tips of his oars grazing the algae-dappled water.

She added that specific areas in the Gardens offer unique spaces for each individual composition. Fanciful statues in the cottage garden, she predicts, will appeal particularly to children. 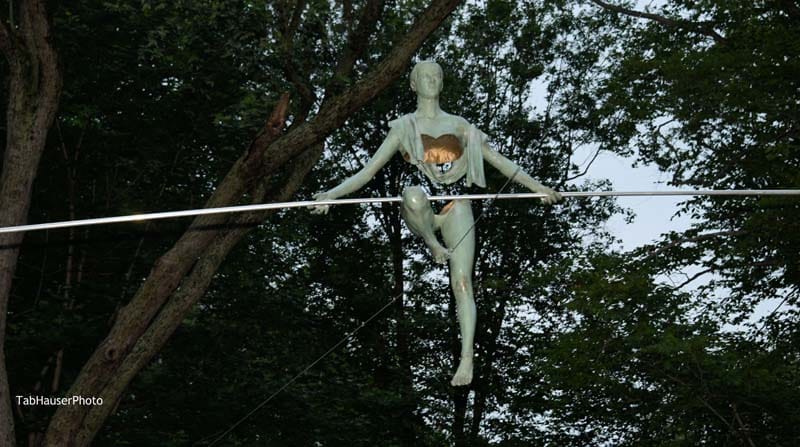 “Jerzy likes performing in open air so that the public can interact with his sculptures. Balance in Nature plays with wind, so the sculptures behave in different ways,” she said. “He wants visitors to visitors to play, to be amused. He wants to show that you can be with art not only in a museum or gallery, but also in a beautiful garden.”

Rapicka explored the more serious roots of Kędziora’s kinetic art, recounting the impact of Solidarity on his ethos. During the 1980s, Solidarity—the first independent labor union in a Soviet-bloc country—catalyzed an anti-communist social movement that radiated throughout Poland. 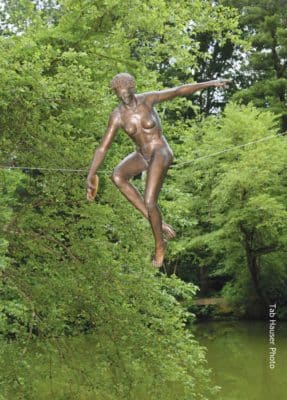 “Political and economic transformation in Poland influenced him very much because he was thinking about the condition of man when affronted with change,” Rapicka said. “He thought about our internal balance and our external balance—the main ideas of Balance in Nature.”

Kędziora witnessed the dawn of the Solidarity movement while studying at the Academy of Fine Arts in Gdańsk, from which he graduated in 1972. Since the 1990s, he has been creating sculptures that evoke aspects of the movement. He has two workshops: one in Kraków and one fewer than 100 miles away in Częstochowa, his hometown and primary place of residence.

Rapicka noted that Kędziora’s works, though inspired by Solidarity, are less about politics and more about balance and change. While busily installing his exhibition, Kędziora clarified that he strives to transmute abstract concepts into figurative compositions in motion.
Indeed, Kędziora is interested in the physiology of movement, Rapicka said; some of his pieces were motivated by watching his granddaughter practice gymnastics.

Perhaps it is this spirit of family that makes Kędziora’s exhibition fit so well with the Gardens’ 200 acres. During the first half of the 20th century, the estate belonged to the Phipps family, heirs to a Carnegie Steel fortune. 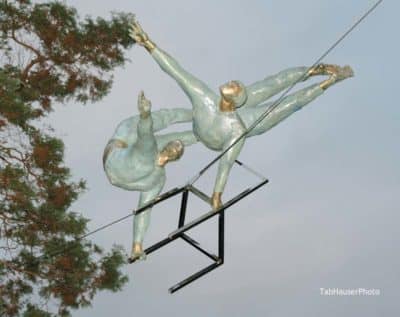 “We can be imposing here with our big black iron gates and the façade of Westbury House, but this was a home,” Brush said. “If you look at our archival photos, the children were very much allowed to run and play in the gardens.”

As Brush commented on the Gardens’ “graceful elegance,” the historic mansion lay in the background, a statue of a golfer silhouetted against the sky, a lush field of grass thriving dozens of feet below his tightrope.

“Our goal, always, is to make people feel like the visitors of the Phipps family when they’re here. I think that this exhibit will let visitors see our more amusing side,” she said. “For the summer, there’s a playful side again to Old Westbury Gardens.”