This year, toy company Hasbro is unveiling some of its hottest items for this upcoming holiday season that kids of all ages—and even some of you parents out there—will be sure to love. First up, is the Power Rangers Dino Fury Chromafury Saber.

The Chromafury Saber has color-scanning technology, color-changing LEDs, and motion-activated light and sound effects that lets kids and fans imagine leaping into action as their favorite Power Ranger. Press the button on the hilt of the saber and place the end of the hilt on a surface to scan the color. Scan something red to make the LEDs in the blade light up red, like the saber of the Dino Fury Red Ranger. Or scan something pink for a pink blade or blue for blue. Scans aren’t limited to Ranger colors: scan orange for an orange blade. The Chromafury Saber is for kids ages 5 and Up and is $29.99. Available online and at all major retailers. Be sure to watch Power Rangers Dino Fury on Nickelodeon on Saturday mornings and on Netflix. Season 2 of Power Rangers Dino Fury will launch Spring 2022 exclusively on Netflix. 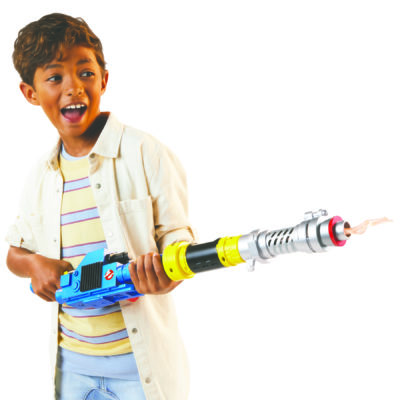 Who ya going to call? That’s right. Ghostbusters. Kids can imagine busting ghosts in all kinds of ways with Hasbro’s Ghostbusters Proton Blaster M.O.D. The primary blaster, complete with sound and light effects, comes with two attachments—the Blast ‘n’ Trap and the Proton Stream. When kids attach either accessory, unique lights and sounds are activated. Attachments can be placed in three locations: on the front, side or back of the main blaster, so kids can customize their blaster to fit their ultimate ghost bustin’ adventure. For kids ages 5 and up and is $29.99. Available at most major retailers nationwide. The long-running children’s series following the adventures, mishaps and friendships of Peppa Pig, her brother George, their parents, and the other animal families who make up their town continues with Hasbro’s Peppa’s Family Motorhome. Kids ages 3 and up will love pretending that they’re on holiday with Peppa Pig and her family with the Peppa’s Family Motorhome toy. Kids can imagine being on the road with Peppa as they roll the motorhome in vehicle mode, and press the steering wheel to hear music and phrases from the Peppa Pig series. When it’s time to “camp,” kids can convert the vehicle to a multi-level RV playset with a trailer hitch that attaches to the Peppa’s Family Red Car toy, which is sold separately. The Peppa’s Family Motorhome comes with Peppa, George, Mummy and Daddy Pig 3” figures and 15 accessories. Everything stores inside the playset—ready for the next adventure. Price is $49.99 at all major retailers. Head into your own top-secret mission with Hasbro’s Snake Eyes: G.I. Joe Origins Snake Eyes Special Missions mask. With the Snake Eyes Special Missions mask, kids can imagine the exciting ninja-battling action and excitement of the G.I. Joe universe. Featuring movie-inspired detail and design and a fun electronic light-up feature, boys and girls will love creating favorite moments from the Snake Eyes: G.I. JOE Origins movie. With the press of a button, boys and girls will love activating the Snake Eyes Special Missions Mask electronic light feature, illuminating the Arashikage clan symbol and the head-up display (HUD), as they enter a world of cutting-edge technology, traditional Ninjutsu weapons, breathtaking martial arts and Next-Gen Ninjas. For ages 5 and up and is $19.99. Available at all major retailers.