Generation Axe: Steve Vai Weighs In On His Tourmates

Calling Steve Vai a virtuoso is the epitome of an understatement. Ever since coming out to California fresh out of the Berklee College of Music in 1979 and cutting his compositional teeth playing and recording with Frank Zappa, the Carle Place native has followed quite the convoluted creative path. A hero to a generation of shredders and other six-string fanatics, Vai has played the role of hot-shot guitar god rock star (Alcatrazz, David Lee Roth, Whitesnake), educator (Vai Academy), movie star (Crossroads) and in-demand session guitarist (PIL, Alice Cooper, Eros Ramazotti, M83). And this doesn’t even take into account a highly respected solo career that’s going on three-plus decades and counting. 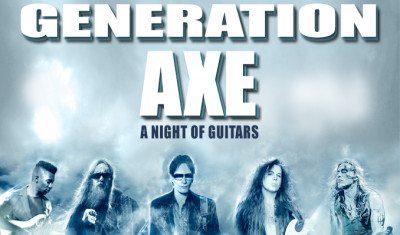 His latest endeavor is Generation Axe, a tour that’s putting the multi-talented musician on stage with four other axe-wielders handpicked by Vai: Tosin Abasi (Animals as Leader), Nuno Bettencourt (Extreme), Zakk Wylde (Ozzy Osbourne; Black Label Society) and Swedish neoclassical metal pioneer Yngwie Malmsteen (Alzcatrazz). Vai is beyond thrilled with how the tour is, and as far as he’s concerned, Generation Axe is, “…a beautiful potpourri of flavors hitting you in the face—it’s just a great show. If you’re a guitar lover, you may think that it’s just going to be a big wankfest, but there’s just so much dimension with what everybody does. It’s beautiful.” Here are his thoughts on the brothers in all things guitar that he’s currently on the road with.

1. Tosin Abasi
“Tosin Abasi represents this whole new kind of subculture of really very heavy but quite beautiful music. And his guitar playing is sort of contemporary level stuff. There are a lot of people doing that kind of tuned-down, eight-string material, but it’s rare that you really hear harmonic depth in it. He’s got that in boatloads, so he adds a dimension to the show that’s unique.”

2. Nuno Bettencourt
“We kind of complemented each other when we first started doing this tour, because it was a huge workload. Nuno is the consummate professional in that sense, and he’s very insightful and he was coming off being the musical director for Rihanna. So he really understands what was going on and picked up a lot of the responsibilities, so we really hooked up. He is such an incredible talent on so many levels that I believe are undiscovered by people. I only really saw that by hanging with him, being with him and bonding with him and then seeing how he presented his portion of the show. It’s so beautifully dimensional to the rest of the floor, and he’s the motor behind that thing. He’s incredibly intuitive, insightful and his guitar chops are formidable, man. I had no idea really. I’d heard him play, but gosh, he’s really a freakazoid.”

3. Zakk Wylde
“Zakk Wylde is this exploding mountain. His tone is so rich, heavy and thick and he can really shred. You’ll be listening to Zakk and his solos are pretty indefinite, meaning they can go on and on. But he throws these things into the loop sometimes that are so left-field and stunning that you wonder where it came from. And he just loves the instrument so much, and he’s one of the finest and big-hearted guys I’ve ever met. He’s just unbelievable.”

4. Yngwie Malmsteen
“What can be said about Yngwie? He’s a total master. He’s an innovator and a classic virtuoso of the highest order. He is so absolutely ingrained in his musical atmosphere and what he creates that his conviction and his intentions are fierce. Yngwie is so fiercely confident in what he does that he doesn’t feel threatened by anybody or anything. So this allowed us to really kind of bond. He’s like my brother. We’ve done shows together and all this stuff, but really, there’s a deeper connection there. You’ve just really got to understand him. Yngwie is very professional. If he has to be someplace at a particular time, he’s going to be there and you better be ready. He’s fiercely committed and confident in what he does. And it’s so refreshing.”

Generation Axe will be appearing on May 6 at NYCB Theatre @ Westbury, 960 Brush Hollow Rd., Westbury. For more information, visit www.livenation.com or call 877-598-8497.