Full-Time Legislature Not The Answer 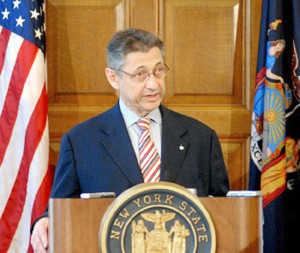 As a blizzard swept northward on Monday of last week, the State Assembly Speakership of Sheldon Silver got smaller every hour, until finally, after a 10-hour showdown meeting of that house’s Democratic Conference, it was made clear that he was vacating the position he’s held since 1994. An upstate newspaper called this the “Silver Defenestration Drama,” which forced me to hit the dictionary. Cool word.

Very quickly, Speaker Silver lost control of the whole thing. You could see it and feel it falling away. This was like a smash cut from previous leadership challenges (or indictments), featuring a stream of public comments, impromptu hallway media conferences, tweets, posts, phone calls and more from Democratic Members of Assembly. By Monday night, no less than two dozen members of Silver’s own conference had publicly stated that he should resign, and by the next morning, many more were on record as at least acknowledging that one way or another, he was finished as Speaker.

Contrast that with the purposeful stealth of the last successful takedown of a state legislative leader. Exactly two decades ago, Senator Joe Bruno moved against Majority Leader Ralph Marino of Oyster Bay. Shortly after a Nassau County Senator and Marino ally predicted to a reporter that no real threat would materialize, the reporter called back and informed the Senator that it was already over and that Marino was on the way out.

Last week, an assemblyman was announcing counts of pledged supporters for Speaker while Silver was still saying he wasn’t going anywhere.

Even first-term, first-month assembly members were questioned by reporters about the mood and plans of the conference, and they gave answers, as such, including Assemblyman Kaminsky of Long Beach, who has been a legislator for three-and-a-half weeks.

Silver’s message had been, “Eventually, I will be vindicated.” There’s no time or patience for “eventually.” It’s a Right Now world.

Now we know that there will be an election for Speaker in the Assembly Chamber on Feb. 10. Assembly Democrats, members and staffers roll their eyes when discussing their State Senate counterparts, who have languished for all but three of the past 50 years in the minority, serving as the minority even when they had more seats than Republicans. There is a determination to avoid any protracted leadership fight like the bizarre 2009 coup d’état that made Senate Democrats a laughingstock.

One old saw that’s popping up is that we should greatly increase, even double, legislator pay and ban them from earning outside income. This might prevent lawyers from ending up caught up in federal bribery and corruption charges like Silver, but will create other problems.

Consider that in 1990, Assemblyman William Passannante of Manhattan retired after 36 years in the Assembly. He was seen as a kind of pleasant oddity. Nobody was less than 10 years behind Passannante in length of service. Today, there are 18 sitting Assembly members who will have served at least as long as Bill Passannante at the end of their current terms.

It’s crept up a little, but the re-election rate of incumbent legislators is about what it was 100 years ago. What’s changed is that the typical state legislator used to serve three terms and move on.

The chairmen of the two most power­ful Assembly committees, Ways & Means and Codes, have been in those positions since 1994 and 1992, respectively.

Frustrated legislators already see the system as clotted. Jacking up the pay will generate more lifetime legislators and more jockeying for attention and opportunity.

Some of those who get to vote for Speaker will likely be weighing the best way to open up the most positions, not the best choice to head the house.