From The Gridiron To A Game Show

Fitness mission is focus for Price Is Right Model

To see Devin Goda, you would think everything has been peaches and cream or more precisely, carrot sticks and water. While everything is indeed going well and getting better every day, that wasn’t always the case for the former football player. That’s where Goda’s story truly begins and the journey that brought him to his present-day success.
Talking with Goda is in fact a truly uplifting experience. He exudes a positive persona and is determined to make everyone’s day a little bit better. On the brink of 30,
Goda has spent the last two seasons as a very popular model on CBS’ iconic game show The Price is Right [TPIR]. The road for him began in Western Pennsylvania, and like many before him, this regional football factory produced yet another gridiron whiz. As a standout wide receiver at Elizabeth Forward High School, and then Slippery Rock College, Goda set his sights on the NFL. Undrafted and signed by the Baltimore Ravens at 22, Goda played two games before tearing his hamstring. It was an injury that ended his lifelong dream before it ever had a chance to begin. 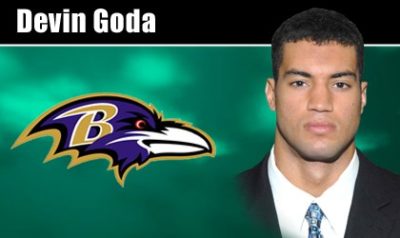 Rather than dwell on the negative, Goda looked inward and chose to go in another direction. Faith and spirituality wound up playing an important role for the direction his life took.

“Obviously God had a different plan for me and I had to go with it,” Goda said with no sense of remorse. His self-awareness plays a vital role in what he does, as does fitness and wellness. Since his NFL playing days have ended, Goda has been busy as a top model and wellness guru. The TPIR gig almost didn’t happen given that Goda didn’t want to move to Los Angeles,  a very integral role in shaping Goda into the man he is. Despite riding herd on a hectic schedule, he makes time to spend time with his proud “nana and papa” in Milwaukee. While traveling, Goda can often be found volunteering at local senior centers teaching the folks the importance of exercise and
wellness.

“Never forget about our seniors, they represent who we are,” he said.

It’s this dedication to people and principles that makes Goda a standout in everything he does. When talking about his TV gig, he describes host Drew Carey as being, ‘…more than a boss, he’s a good friend and person.” The two often go to soccer games and events together.

A visit to Goda’s Instagram page reflects the enormous amount of work he puts into it. The posted workouts and videos are inspiring and are only surpassed by his zealous commitment to wellness. Goda will help anyone willing to help themselves. He can be found quite often at local gyms working out and helping others get fit. For Goda, it’s more about feeling good than just looking good. It’s a message he plans to continue spreading via his mission of bringing the idea of healthier living to the masses,
“My TV work gives me a platform to showcase my wellness work,” he said.

As a spokesperson for various products, Goda says people shouldn’t be intimidated by looking at him. His “body” of work comes via a lifetime of dedication. That said, he insists anyone can achieve positive results if they just put the work in.

A top student in school, Goda never envisioned being on this particular career path.
He admits, “I always thought football was going to be my future.”

His career-ending setback left him believing in living for the moment and it has served him well. Given how his days are filled with faith, fitness and fun, he doesn’t have time to feel cheated or have any regrets about his experiences so far. Most recently, he returned from St. Lucia after working on a soon-to-be announced project. Not bad for a guy who many thought would buckle under the pressure of a lost football career. The upcoming year promises more positives for Goda. In addition to his TPIR work, major modeling campaigns, movies and television work are on his docket. Offers continue to come in at a fast and furious clip.

But despite the whirlwind around him, Goda uses a methodical and disciplined approach before making any moves, using his faith as a road map. It has served him quite well up until now and Goda is fine with that. While never preachy, Goda does say everyone should find something that suits them and go with it. To that end, Devin Goda is a voice of positivity and selflessness in a world mired in negativity.

Barbara Silbert: About The Artist

A former art director, Barbara Silbert lives in Port Washington and is a past-president and current membership chairperson of the Manhasset Art Association. “I used...
Read more
Check It Out

A (Stage) Actor’s Life For Me

Bobby Cannavale’s love affair with the theater When William Shakespeare wrote “All the world’s a stage,” as part of the monologue for As You Like...
Read more

It’s not every day that you can watch people dressed as cowboys riding on horses, especially on Long Island. For the Island Long Riders,...
Read more
Sports

Mets pitcher Steven Matz honors first responders at Citi Field It may not look like it, given where he stands now—60 feet and six inches...
Read more
Long Island News

Hicksville native Tim Parker, 21, was recently selected to join the Vancouver Whitecaps FC, as the 13th overall pick in the first round of...
Read more

In a fun evening of Jewish unity, hundreds of Nassau County women will partake in the aromatic, delicious, and spiritual tradition of making challah...
Read more
Lifestyle & Culture

Pour It Up, Pour It Up At Rosé Mansion

Disclaimer: You will get confetti everywhere. But that’s what makes it fun because there aren’t many places you’d find dispensers full of different types of...
Read more
Design & Décor

It’s the second week of December and if you aren’t decorated for Christmas yet, you are considered to be very behind in holiday merriment....
Read more

It’s that time of year again when time in the kitchen is all about warming hearts and bellies with hearty fall dishes. Fortunately, our...
Read more
Columns

Enter The Golden Age For Wine

It’s an exciting time to be a wine lover. A genuine revolution in wine has taken place in the last 25 years. Much like what...
Read more
Food & Leisure

Farm-Fresh Direct To Your Table

If you’re looking to ditch the grocery store produce you’ve been buying, try checking out a farmers market where you can pick up fresh...
Read more