Summer 2017 continues to see the latter-day rebirth of Forest Hills Stadium. Now going into its 94th year of existence, the former home of the U.S. Open has continued its rich legacy of being the site for a number of historic concerts held during its heyday from the 1960s through the early 1980s, when the likes of The Beatles, Barbra Streisand, Frank Sinatra, Jimi Hendrix, The Doors, The Rolling Stones, The Police, Talking Heads and Marvin Gaye graced this Queens stage.

Since reopening the stadium in 2013, Madison House Presents music promoter and booking agent Mike Luba hasn’t missed a beat. With Mumford & Sons getting the ball rolling four years ago, Luba has given concert-goers the opportunity to see an impressive array of national acts to play the stadium including Bob Dylan, The Who (both who had played here earlier in their careers), Dolly Parton, Santana, Van Morrison, Chic, D’Angelo and Paul Simon, who performed a two-date homecoming set last year. 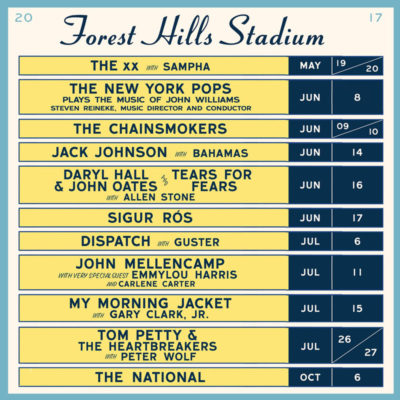 This season is no different as The xx, Hall & Oates, Tears for Fears, The Chainsmokers and Sigur Ros have already played, with Tom Petty & the Heartbreakers, John Mellencamp, Emmylou Harris, The National, Interpol and My Morning Jacket slated to fill the remainder of the season.

“I think we are all pretty pleased with the diverse and eclectic lineup. We covered a lot of musical ground this summer,” he said. “The [artists] love it. There is a real circuit, which tends to be an endless tour and then you get to a place like this that tends to be unique and I think it’s a really nice change of pace for everyone. And then the fact that the stadium itself is so intimate and the crowd is so immediate and intense that the gigs, so far, have all been great. We’ve been charmed and lucky.”

Owned by the West Side Tennis Club since it was erected in 1923, Forest Hills Stadium got its most recent upgrade when Luba arranged to have benefactors pour between $4 to $5 million into renovating the space and wound up putting another $1 million into the infrastructure as a means of making this a more upscale concert-going experience. Last season saw the addition of upscale Port-a-Potties that included air conditioning, running water, flushable toilets and sinks in the bathrooms.

This year’s improvements included doubling the size of the entrance concourse and replacing the red clay surface with synthetic grass. But for the most part, this year’s upgrades are invisible to the human eye, despite having a substantial overall impact.

“This season we did lots of infrastructure upgrades—drainage, paving, stage area and the box office,” Luba explained. “The biggest improvement is the expanded grassy main concourse area.”

Among the more unique nuances Forest Hills Stadium boasts are hidden private lounges which provide a stellar sightline to the stage. Last year, four of them opened, including one where VIPs, friends of the performers and concert organizers entered through a fake Port-a-Potty and were allowed access with the help of a password. Like their predecessors, the ones that have been added this year are not unlike a high-class speakeasy complete with a full bar, vintage tennis ephemera and other items unearthed during renovations. The new lounges also include outdoor patio areas featuring fake grass, bordered by hedges, and new iron arches inspired by drawing designs of the 1920s version of the stadium.

With this venue being in the middle of the residential neighborhood that is Forest Hills Gardens, Luba diligently works on being a good neighbor. Noise concerns and increased foot traffic have been addressed by rerouting concert-goer flow so fans wind up walking along where Burns Street abuts the Long Island Rail Road, and installing sound-absorbing material along the fence lining the perimeter of the stadium’s property, adding stairway enclosures to muffle leaking sound and noise-proofing the side and rear portions of the permanent stage. Aesthetics are also being addressed via plans to start upgrading the outside fencing surrounding the venue, which hasn’t been touched since the 1950s.

“People have actually complained that the acoustic soundproofing has made it so that no one can hear music being played just outside the stadium,” the Albertson native pointed out.

Given that Forest Hills Stadium is not unlike the equivalent of a summer home that needs constant upgrades, everything having to do with this space makes it very much a work in progress that includes a learning curve being built into each subsequent season with a wish list attached to it.

“Every year the stadium and the grounds reveal new things and we try as hard as we can to listen to what is being told to us and take steps to make things better,” Luba said. “It feels like it will be an ongoing and potentially endless quest to get things just right.”

Visit www.foresthillsstadium.com to find out more about Forest Hills Stadium.

Previous articleWhy You Need An Eye Exam
Next articleEvolution Through Mentorship