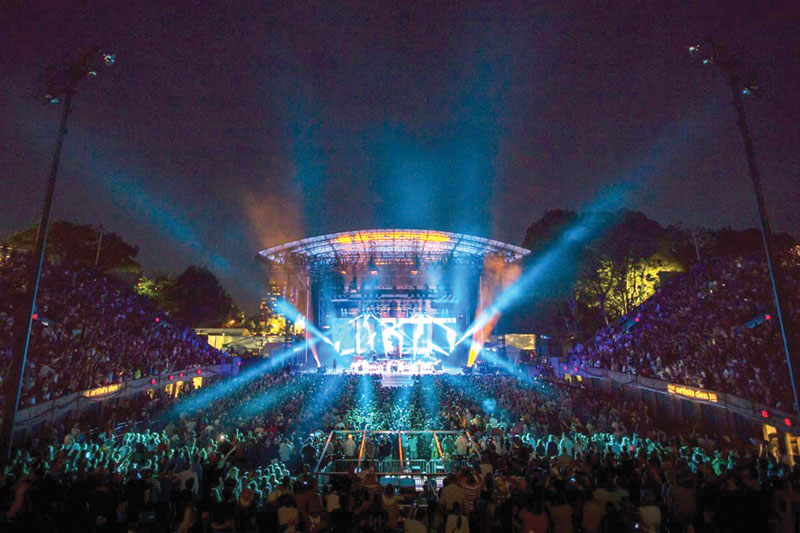 Nestled within the cozy confines of a sleepy bedroom community a few blocks off of Queens Boulevard is Forest Hills Stadium. With summer 2018 in full swing, the historic venue is a few weeks into its concert season, which is taking place during the stadium’s 95th year of existence. Since reopening the building in 2013 with a preliminary Mumford & Sons concert, followed by a full slate of shows the following year, Madison House Presents music promoter/booking agent Mike Luba has brought in quite the diverse and eclectic lineup of acts.

Luba’s recent bookings have included the late Tom Petty, hometown boy Paul Simon, Emmylou Harris, Dolly Parton, Bob Dylan and The Who (both who had also played here earlier in their careers), Hall & Oates, Chic and John Mellencamp. This year opened with Belle & Sebastian, Robert Plant, Alt-J, Nathaniel Rateliff and the Night Sweats and Roger Daltrey appearing along with the New York Pops performing The Who’s Tommy. With such a strong showing so far, the promoter is plenty jazzed about who’s coming to Forest Hills Stadium in the coming months.

“Van [Morrison] is back for the third time and he’s bringing Willie [Nelson] with him. Willie has been on the bucket list from day one, so we’re thrilled that it’s hopefully going to happen,” he said. “Having David Byrne play here 35 years after, for what many people consider the last great shows here. That would be the Talking Heads in 1982 and 1983. David was on our list from day one, so I think that was kind of a dream come true.”

This year’s project was the construction of a 4,700 square-foot permanent bathroom facility featuring individual stalls and urinals. Early feedback from concert-goers has been overwhelmingly positive. It’s a major punch-list accomplishment that took nearly the entire off-season to accomplish, but it was well worth it for Luba and his crew.

“We kind of felt like we didn’t want to take advantage of the charm of the place. There are only so many times you’ll come and go into a crappy Port-a-Potty,” he said. “These new bathrooms make it a place that you can bring your grandmother. People have wanted legit bathrooms and they should get legit bathrooms.”

Luba is also working towards making Forest Hills Stadium a multi-use facility. He’s booked EEEEEATSCON in October, which is a significant foodie event hosted by a group called The Infatuation.

“These guys are kind of the taste-makers and curators of the best restaurants around the country,” Luba said. “So far they’ve done this twice in L.A., but they’re based here. They came, did a walk-through and fell in love with the place and decided to give it a shot.”

There’s also a novel idea of dropping an ice rink into the middle of the stadium and creating a kind of winter village that could operate during the off-season when it’s too cold to see live music under the stars. It’s a plan the Albertson native has high hopes for.

“The dream is to have an ice skating rink. That’s what we’ve been talking about. It’s not like we’re going to be doing concerts in January,” Luba said. “It’ll be the best, most fun place to go ice skating in Queens or anywhere—right in the middle of the stadium. And really, that helps us in all sorts of operational ways. We’re hoping that it’s a great thing for the neighborhood.”