This year marks Forest Hills Stadium’s 96th year of existence. And while its origins date back to 1923, when it was constructed with the express intent of becoming one of the cathedrals of tennis (thanks to its role as the original home of the U.S. Open and Davis Cup), it has enjoyed a recent resurrection as a beloved outdoor music venue. Since Madison House Presents music promoter/booking agent Mike Luba and his partners got things back on track by bringing in national acts, starting with a 2013 Mumford and Sons concert, the old girl has become somewhat of a summer rite of passage for both touring performers and fans.

A wide range of artists have hit the stage in Forest Hills Gardens ranging from Santana, The Who, Bob Dylan and Dolly Parton to The Chainsmokers, D’Angelo, Drake and Chic featuring Nile Rodgers. The lineup this year is no less impressive as fans will get a chance to catch an equally wide range of performers including Sarah McLachlan with the New York Philharmonic, The Chemical Brothers, Beck, “Weird Al” Yankovic, YouTube Personality JoJo Siwa, Jenny Lewis, Fitz & the Tantrums and Willie Nelson. Luba is rightfully proud of the slate of concerts he’s booked for the upcoming season.

“We’re really psyched because we have two of our favorite bands returning that headlined last year and sold out on their own and are back to support their heroes like Interpol with Morrissey and Nathaniel Rateliff with Willie [Nelson],” he said. “Elvis Costello is going to be back almost 35 years to the day with Blondie. So that feels like the most New York show of all time that we could ever book. It’s doing great, so we’re super-psyched for that.”

The venue’s success came through a lot of necessary hard work including upgrading the stadium, while also handling the delicate complexities that come with hosting live music in the middle of an upscale, residential neighborhood. As for the former, major improvements included basics like installing seats, aisles and a custom stage in addition to upgrading the bathroom facilities and moving away from the use of plastic Porta-Potties. This year’s major upgrade involves Con Ed connecting the Stadium to the main power grid. Most crucial was getting residents to feel like their concerns were being heard, such as noise issues, which Luba addressed a couple of years ago when he professionally sound-proofed stairwells, which had previously been a source of major decibels leaking out. The plan was to hopefully have locals embrace the facility as being part of the community. It’s a goal Luba feels he and his crew have achieved.

“We just had our annual meeting with the Forest Hills Garden and community board folks. Five years ago they were borderline hysterical and this everyone, from the police and fire department to [numerous residents], were happy with things,” he explained. “There’s a core group of people that have seen at least one show here, so it’s not completely virgin territory, so I think that helps everything run a little bit smoother. We spend a lot of time listening and we literally take every comment and every bit of feedback we get for real and treat it seriously.”

Future plans are to hopefully get an ice rink and winter village installed to give Forest Hills Stadium more year-round appeal and make it easier to get on track when the warmer weather arrives. 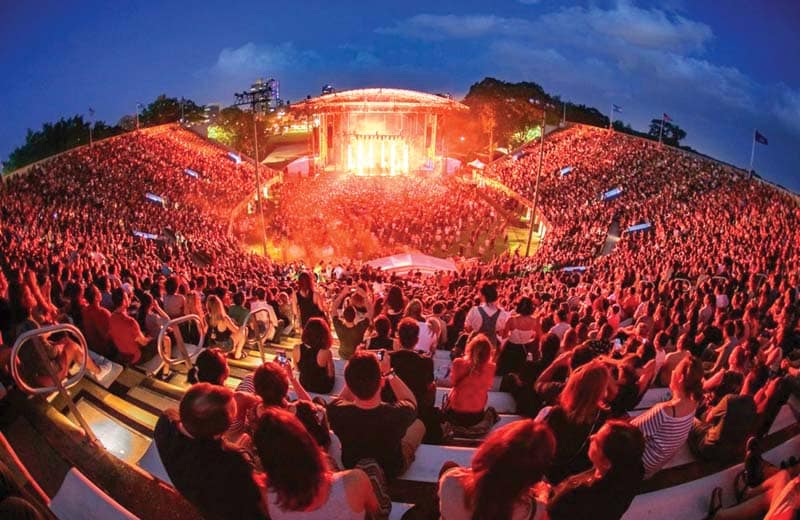 Luba admits the artist wish-list has decreased with every passing year, among the artists he’s still targeting are Neil Young, Bruce Springsteen, Billy Joel and Paul McCartney (“We do a dance with [him] every year. We’re hopeful that one time it will make sense”). Not unlike the artists who return to play here, and the loyal fans who keep coming here to immerse themselves in the symbiotic relationship that comes out of the best live music experiences, Luba feels the quirkiness of Forest Hills Stadium is what makes it such a unique place to catch a show.

“There’s really not a bad space in the house. We’ll sell as many tickets as you’d sell at Madison Square Garden or Barclays. But the distance from the last seat at the top to the downstage edges is half the distance. So it’s super intimate and feels like it’s half the size of what it really is. I think it creates mega energy that bands feed off of and the fans feed off what the bands are feeling,” he said. “Because it’s a horseshoe, people on the ends of it are not only looking at the stage, they’re looking at each other. You can actually see the rest of the room, whereas in a lot of places, it feels like a big, amorphous blob. This feels like a very communal, we’re-all-in-this-together vibe.”

The Forest Hills Stadium 2019 season kicks off on Saturday, May 25, with Greta Van Fleet and Ida Mae. For more information, visit www.foresthillsstadium.com or call 888-929-7849.