Melissa Etheridge Returns To the Scene Of The Crime 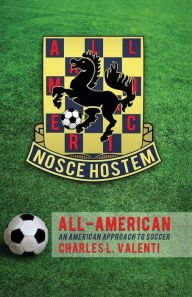 Author Charles L. Valenti shares his personal experience as a soldier and athlete in his new book, All American: An American Approach to Soccer.

“All American” is a story about love of country, of community, of family and of friends. The book also encompasses the unwavering brotherhood of teammates and fellow soldiers. Known as the “Golden Lion,” one soldier taught his cub to become an athlete, utilizing skills sharpened by military philosophies and great knowledge of American sports.

Valenti shows the love of soccer, the seed of which was planted in a distant land. The young plant was brought to America, and the blossom became known as the Cleveland High School soccer team. Readers will experience life and love in the hamlet of Verona, Italy—the birthplace of Romeo and Juliet—and will be taken across the Atlantic Ocean to various places, including Camelot, where soccer and baseball embrace military thought.

Published by Tate Publishing and Enterprises, the book is available through bookstores nationwide, from the publisher at Tate Publishing’s bookstore, or by visiting barnesandnoble.com or amazon.com.

Though he never played soccer himself, Valenti was an experienced athlete, having played baseball for Long Island University in Brooklyn. After accepting the coaching job at Grover Cleveland High School in Ridgewood, New York, he led the team to the playoffs 15 times, including four city championships and a combined record of 185 victories and 33 defeats. Valenti takes pride that his team has never been beaten by more than one goal for 10 years.

The author currently resides on Long Island with his wife, Leila, and his dog, Gizmo. He has two sons, Ted and Chris; and two grandchildren, Christina and Teddy.