Fitz And The Tantrums Got All The Feels

Music has always been a true calling for lead singer of the band Fitz and the Tantrums’ Michael Fitzpatrick. The calling that Fitzpatrick decided to answer has catapulted himself and his fellow band members into the spotlight for more than a decade and is still going strong.

“If you have music in your bones, you just have to do it,” Fitzpatrick said. “For me, if I’m not musical on a daily basis, I just don’t feel right in my head or right with the universe. It’s always kind of been that way since I was a little kid and then I went to a high school for the performing arts where I started music. I thought I might want to try something else and tried to get a film degree and I realized that I still loved music more than anything and was lucky enough that it actually worked out and that I can make a living from doing it.”

Writing a couple of songs off the heels of a bad breakup, which Fitzpatrick said is a great catalyst to write music, he sent his friends some demos to see what they thought. Their response was positive.

“It was pretty easy getting the whole band together, which is not usually the case, but this was five phone calls and I had a band together,” Fitzpatrick said on how Fitz and the Tantrums came to be. “We went into a rehearsal space and we played one song where we sounded like we’ve been playing together forever. I was so blown away that I walked out of the room and booked us a show at this famous spot called the Hotel Café in Los Angeles. We played our first show a week later and we kind of haven’t stopped touring since. The response was phenomenal and we got these amazing opportunities to open up for Sharon Jones & the Dap-Kings and Maroon 5. That really put us on the national map and we’ve just kept going. Now, it’s 11 years later, which is hard to fathom sometimes.”

The band released their fourth studio album, All The Feels, late last year. The 17-song album focuses on a wide range of emotions from joy to anxiety to depression and has spawned hit singles “123456,” and “I Just Wanna Shine.”

“I think you have to write from an honest truthful place for a record,” Fitzpatrick said. “The songs really need to have a connection with people and for yourself because at the end of the day you write music almost like a therapy to your own heart and head. For me, this record was trying to be real and talk about all the things from joy to anxiety to bouts of depression, yet people know our music to be uplifting and fun that makes you want to dance. When we were trying to figure out what the name of this record was, as soon as we wrote the song ‘All The Feels’ it was just obvious that it was going to be the title of the record because it encapsulated what this album was about for us.”

And with a new album also comes a brand new tour. Fitz and the Tantrums will be touring the next couple of months across North America where one of those stops is right on Long Island when they come to The Paramount in Huntington on Feb. 18.

“Anybody that has seen us knows that we put on a super high energy show,” Fitzpatrick said. “If you’ve come to our show it’s not to stand still. We love to go crazy and we love to involve the audience and make them the seventh member of the band. The more that we get to the audience, the more it gets back to us and it becomes this crazy pressure cooker of energy. If we can give people an hour and a half break from their day and be given permission to let their hair down and go a little crazy, even if they’re the worst dancer in the world, to get their groove on with us and bring a little joy to their day to escape the grind of how stressful life is for anybody, then we achieved our goal.”

One of the songs that fans can expect to hear the band perform live is the upbeat positivity anthem “123456,” which Fitzpatrick said came together pretty quickly when writing it. 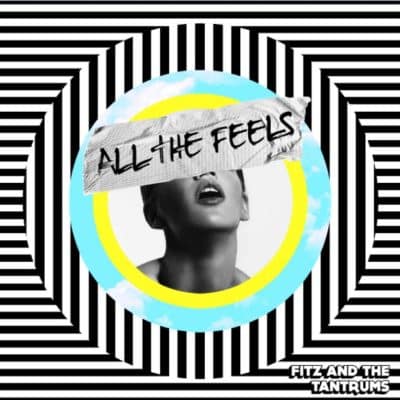 “That song was so much fun,” he said. “I was working with K. Flay, who is another artist and a friend of ours, Tommy English, who produced it. It was just one of those moments where I was like half way or three quarters through writing the record and you’re so deep in it, you don’t know up or down anymore and you don’t know if anything you’re doing is good. You just have no more clarity. It was great working with K. Flay because she had just finished her record and she knew exactly the headspace that I was in. We just spent the first hour hanging out and talking about that and then we came up with this little groove that was making us all dance in the room and it just flowed so easy from there because that’s what that song is really talking about. It’s that moment where you wake up and you’re feeling confident and you’re just going to try your best to hold on to that moment for as long as you can because you know that moment is fleeting.”

In terms of Fitzpatrick’s favorite song to perform live when out on tour, it’s hard for him to choose.

“For me, obviously ‘Handclap’ has been our biggest song that we’ve ever had,” Fitzpatrick said. “The reaction is great, but I would say ‘All The Feels’ for me is a song that really gets me very emotional every time we perform it. I love singing it and maybe because it’s one of the deeper cuts on the record, it hasn’t been on the radio yet and people might not know it as well. I enjoy so much the experience of performing it and seeing people really connect with the song.”

The band is pretty busy this year since they are also touring Europe and Asia after they finish their North American stint.

“We’re always writing songs trying to put them in the bank for the future,” Fitzpatrick explained. “Our main mission once we write a record and the joy that we derive most, is putting it out there and playing. We toured all summer, we’re touring now, we’ll go back out this summer and we’re going to Europe in the spring, we’re going to Asia probably in the fall. What we do is so not 2020. It’s very analog. We can only play one show at a time at one place and yet that’s so rewarding. There’s nothing like the feeling of playing in front of a crowd. So to me, I’m just so proud of this record and every moment that we can go spread the gospel of this new record, I’m all in.”

Fitz and the Tantrums will be performing on Feb. 18 at The Paramount in Huntington. For tickets, visit www.ticketmaster.com.