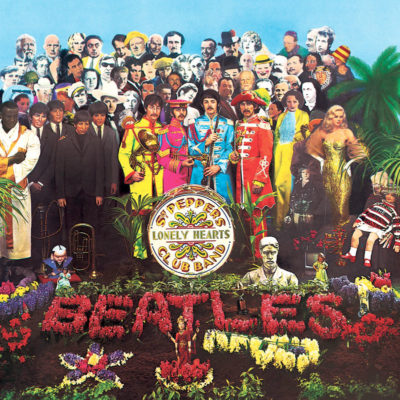 On June 1, Sgt. Pepper’s Lonely Hearts Club Band turned 50. To say the release of The Beatles’ eighth studio album was a game changer is an understatement. It caused a creative ripple effect that was felt within and beyond the music industry thanks to the innovative studio techniques and concept album approach inspired by both the Beach Boys’ Pet Sounds and Frank Zappa and the Mothers of Invention’s Freak Out! While the double A-side “Strawberry Fields Forever/Penny Lane” that preceded the release of the album (and was subsequently not included on the final outcome which according to producer George Martin was, “the biggest mistake of my professional life”), the tone was set for the subsequent project.

Spearheaded by Paul McCartney’s concept of The Beatles taking on a fictional alter-ego, Sgt. Pepper’s represented the maturation of rock music where stylistic nuances of psychedelic, vaudeville, avant-garde, Western and Indian classical music were used to great effect. The chasm between popular music and legitimate art was also bridged, thanks to an elaborate album cover designed by pop artists Peter Blake and Jann Haworth.

The reception to the album’s release included it winning four categories at the 1968 Grammy Awards including Album of the Year (the first rock album to do this), a spot atop the Billboard Top LPs chart for 15 consecutive weeks and 2.5 million albums sold within the first three months of its release. While it was hailed as a “masterpiece” (Newsweek), “a historic departure in the progress of music—any music” (Time) and “a harbinger if a ‘golden Renaissance of Song’” (New York Times Book Review), there were detractors. Most famous was Richard Goldstein, who described it in the New York Times as being, “…dazzling, but ultimately fraudulent.” And as late as 2015, Rolling Stones guitarist Keith Richards slagged it as being, “a mishmash of rubbish, kind of like Satanic Majesties.”

This year, Capitol Records commemorated the 50th anniversary by reissuing four different versions of the record—a single-disc, a double-CD set, a double vinyl set and a six-disc super deluxe edition, with the first disc containing a new stereo remix of the album produced by Martin’s son Giles. The six-disc set includes four CDs along with a previously unreleased 1992 documentary (The Making of Sgt. Pepper) and 5.1 surround sound mixes of the album in both DVD and Blu-ray formats.

Though Sgt. Pepper’s Lonely Hearts Club Band inspired the unfortunate release of the feature film of the same name a decade-plus later, it continues to be a totemic release that completely changed the way people looked at making pop music. Cheers to that.