Foot pain, swelling could signal stress fracture Now that spring has arrived, we’ll be spending more time outdoors. Many people will return to walking or...
Read more
Profiles in Medicine

The World Health Organization has established the goal of the elimination of hepatitis C infection by 2030. The elimination targets are to diagnose 90...
Read more
Healthy Living

Personal training brought to you So, this thing called a pandemic hit, about this time, last year. For avid gym-goers, a year away from the...
Read more
David Bernstein - The Specialist 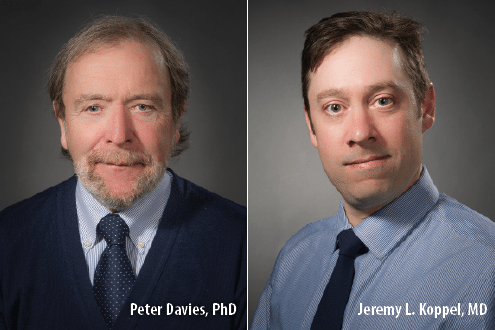 Feinstein Institute for Medical Research scientists Peter Davies, PhD, and Jeremy L. Koppel, MD, were recently awarded a five-year $500,000 grant from the Alzheimer’s Foundation of America (AFA) to explore psychosis and aggression in individuals living with Alzheimer’s disease. This is one of the largest research grants AFA has ever awarded.

“When considering what research projects we should fund, the uniqueness of Dr. Davies’ and Dr. Koppel’s project struck a chord with us,” said Charles J. Fuschillo, Jr., AFA’s president and chief executive officer. “The types of behaviors they’re studying are a leading reason that families transition loved ones from home to skilled care settings. To be able to uncover why these symptoms occur—and to prevent or treat them—would offer solace to so many people.”

Alzheimer’s disease is the most common form of dementia, typically occurring in older individuals over the age of 65. Symptoms include loss of memory and other intellectual functions, that disrupts daily living. Up to 50 percent of people with Alzheimer’s disease experience psychosis, which may include paranoia and other delusions in addition to hallucinations. People experiencing Alzheimer’s disease and psychosis progress more rapidly through the stages of the disease and are more likely to be violent. While at home, spouses and adult children are often the victims of this aggression, and it is a major reason for transition to care settings. In institutional settings, such as skilled nursing facilities, the violence can continue and may be directed towards other residents or staff. Currently, safe and effective treatments for this form of the disease are lacking.

With this study, Davies and Koppel are looking to understand what makes Alzheimer’s disease patients so susceptible to psychosis and aggression in the hopes of leveraging those discoveries into the development of effective therapies. Davies and Koppel believe that psychosis in Alzheimer’s disease may be the result of the regional distribution in the brain of one of the hallmarks of the disease, tangles of tau proteins. The researchers believe that when these tangles are disproportionately distributed to particular portions of the brain, there is a greater probability of psychosis and aggression.

“We are honored the Alzheimer’s Foundation of America is supporting our study to better understand what causes the emergence of such troubling behaviors in previously gentle people,” said Davies. “Through this research, we hope to develop antibody-based medications to treat tangles in the brain, helping reduce the effects of the disease and associated psychosis and aggression.”