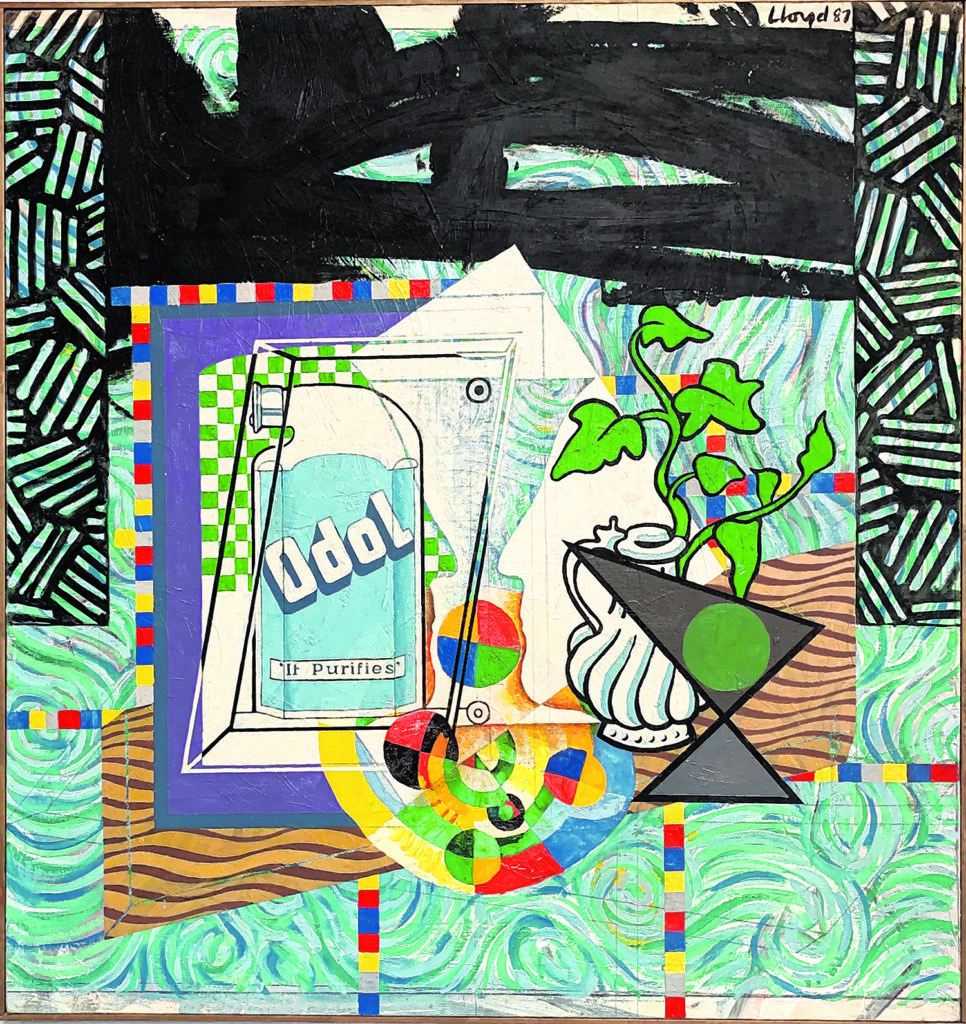 Chris Lloyd was born in 1959 on Long Island. As a child, Lloyd showed incredible potential as an artist. He would sit for hours drawing his favorite cartoon characters and classic movie monsters.

Lloyd feverishly created detailed comics and storyboards which eventually led to making elaborate sets and props for his own stop motion creations.

As a young adult Lloyd studied painting at The Students Art League, Manhattan (1975-1976). He also studied at The School of Visual Arts, Manhattan (1977-1979) and Southampton College (1980-82) where he received a Bachelor’s degree in Fine Arts.

Following college, Lloyd was quite prolific in the studio and exhibited his work regularly throughout the Hamptons and Manhattan.

In the 1980s, Chris was able to produce a powerful body of work. His paintings are a harmonious collision of contradicting art movements and ‘isms’. Through Aug. 26, Sid Jacobson Jewish Community Center (SJJCC) will host the “Chris Lloyd 1980-1990” exhibition, which is open to the public.

“When we were first contacted by Abby [Lloyd] to exhibit her uncle’s work we were touched once we understood the history of these pieces,” said Jaime Teich, vice president of brand strategy and communications for SJJCC. “Being chosen as the facility to exhibit the work of her late uncle, feeling the pride Abby experienced as she curated each piece, seeing the emotions she and her father shared as they hung each piece, brought us to a new level of understanding what artSPACE could be. artSPACE is not only an avenue to exhibit beautiful community work, it’s a place for healing, connection and growth.”

Though Lloyd’s work expresses playful irreverence, his approach was disciplined and rooted in art history. His works are clever, but it’s his ability and dedication to rendering that elevate these paintings into modern masterpieces.

Lloyd’s career was tragically cut short in the early 1990s when he endured a life-altering car accident. He suffered a severe brain injury, leaving him paralyzed from the neck down. Lloyd lived for 17 years after his catastrophic accident. He died in 2009.

Although Lloyd endured significant injuries his spirit never wavered. He loved to laugh and always had a smile on his face. This is the first exhibition of Lloyd’s artwork since his car accident.

“SJJCC and our members are thrilled about the re-emergence of our art gallery, artSPACE,” Teich said. “Re-launching in January 2022 with the interesting multi-media works of Alan Richards, ‘Human Nature,’ magnificent pieces of art created by members in the community bring life to our walls and conversation to those who view each exhibit.”

She added, “Having the Nassau County Museum of Art right across the street where the works of famous artists can be seen, it is a wonderful moment for Sid Jacobson JCC to be able to return to featuring the talents of the members who make up this vibrant community.”

Sid Jacobson JCC is located at 300 Forest Dr., in East Hills. All persons entering SJJCC who are over the eligible age of 12 are required to be fully vaccinated.