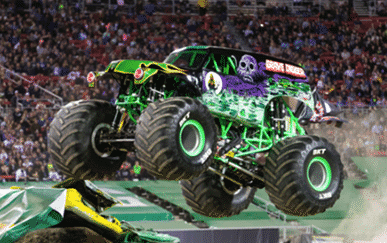 Monster Jam®, the unexpected, unscripted and unforgettable, most family-friendly motor sport in the world today will tear through Uniondale for four adrenaline pumping Triple Threat SeriesTM events at NYCB Live on January 31 – February 2.

Featuring eight of the most intense athletes of Monster Jam, Uniondale fans will witness a fierce battle for the championship with each competitor contending in customized high-powered vehicles: Monster Jam Speedsters, Monster Jam ATVs and of course, the iconic Monster Jam trucks in six events sure to leave fans on the edge of their seats.

Featuring eight skilled Monster Jam® athletes, Uniondale fans will witness a fierce battle for the championship with each Triple Threat Series competitor tearing up the dirt in customized high-powered vehicles: Monster Jam Speedsters, Monster Jam ATVs and of course, the iconic Monster Jam trucks. These Monster Jam athletes will go head-to-head for points in Freestyle, 2 Wheel Skills Challengeä and several Racing competitions, testing their agility, speed and versatility. Newly added as a special fan bonus during Freestyle, a Monster Jam driver will attempt Newark’s FIRST-EVER indoor arena-based Monster Jam truck back flip! Plus, fans in every city can become part of the action by voting for the winner in the 2-Wheel Skills Challenge and Freestyle competitions via real-time, in-arena fan voting on their smartphones.

Monster Jam drivers are trained, world-class male and female athletes who have mastered not only the physical strength and mental stamina needed to compete, but the vital dexterity to control 12,000-pound machines capable of doing backflips, vertical two-wheel skills and racing at speeds up to 70 miles per hour to produce jaw-dropping, live motorsports action seen around the world.

At the Monster Jam Pit Party, fans can see the massive trucks up close, meet your favorite drivers, get autographs, take pictures and enjoy other family-friendly activities. It is an unforgettable part of the Monster Jam experience where special connections are made and lifelong fans are born.

The Pit Parties on Saturday, February 1 and Sunday, February 2 from 10:30 AM – 12:00 PM provide unprecedented access to the Monster Jam trucks and drivers

Dave Gil de Rubio - February 26, 2020 0
While Branford Marsalis may have started playing saxophone as a way of trying to attract cute girls while he was playing in an R&B...