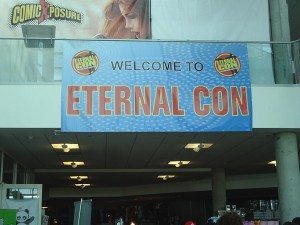 Geek culture reigned supreme on Long Island on the weekend of June 13 and 14, as Eternal Con—Long Island’s very own version of the pop culture extravaganza known as Comic Con—returned for its third successful year to Garden City’s Cradle of Aviation Air and Space Museum.

The event drew thousands of comic book, horror, animation and science fiction fans. Many attendees were “cosplaying,” or coming dressed as characters from their favorite movies, comics or videogames, while pouring through the wares of vendors selling mounds of pop culture merchandise, including toys, artwork and rare collectibles.

In addition, attendees could engage in exciting meet-and-greets with their favorite celebrities, such as Star Trek’s Marina Sirtis, The Road Warrior’s Vernon Wells, The Dark Knight’s Eric Roberts or pro wrestler Mick Foley. In addition, a variety of well-known artists and writers representing a variety of genres were on hand as well, such as comic book legends Larry Hama and John Ramota Jr.

Frank Patz of Bay Shore, an event promoter as well as founder and president of Eternal Con, said that it had always been a dream of his to stage an event in his home much like the ones he’d been attending elsewhere all of his life.

“I’ve been a fan of this kind of genre for a long time…I’m a big geek like everyone else here,” he said. “I’ve always loved going to horror. sci-fi and comic book conventions…my first show was a Star Trek convention when I was a kid. Anyway, I noticed that there was a lack of them in this area, so I decided to run my very own Comic Con. It’s awesome that we got to make this happen. I’m very privileged that all of these people come out to see my show.”

With a large hole left in the local geek convention circuit left by the folding of Stony Brook’s I-CON event several years ago, Patz looked around for just the right place to hold his own event before deciding on the Cradle of Aviation in Garden City.

“I always wanted something that was impressive, and the Cradle is a really awesome backdrop,” he said. “I had always wondered what it would be like if I did a show here, and the people who run the Cradle liked the idea right away.”

If you think organizing and running a convention that draws more than 7,000 attendees to Garden City each year might be a tad on the strenuous side, Patz is adamant that it is not; it’s actually far more difficult than that, he said.

“It’s a total nightmare…getting all of this stuff together, the vendors, the celebrities, the programming, is insane,” he said. “I guess you have to be a certain kind of crazy to know how to do all this stuff, but it’s a labor of love to me. I love this.”

Currently, the Cradle of Aviation is Eternal Con’s home for the foreseeable future; but, as it continues its annual expansion and subsequent rise in popularity, Patz reluctantly anticipates that it may eventually have to move elsewhere to accommodate a larger scope. However, if this comes to pass, he notes that he will miss the unique experience that holding Eternal Con at Long Island’s premiere air and space museum presents to attendees.

“We might have to move soon, but I love the backdrop…it’s hard to find another place that’s like this,” he said. “Last year we had 52 artists situated on the second floor, but due to the response, we have 100 this year, and we moved them into the museum itself…it’s awesome to go see all these artists back there with all these giant planes behind them.”

Justin Layer of Farmingdale came to Eternal Con with a group of friends, and said that was one of the best pop culture events he has ever attended, adding that it was about time that Long Island got something that celebrated the ever-growing love amongst the masses of modern geekdom.

“Seriously, this is such a cool show, and holding it here in the Cradle is the coolest thing…it just fits so perfectly with the theme, it almost looks like the Cradle was custom made for this sort of thing,” he said. “I’ve already met and taken pictures with several great artists and actors, and I can’t wait to see who’s here next year. It’s such a great show for anyone who’s into anything a little inside or outside of the mainstream of pop culture.”