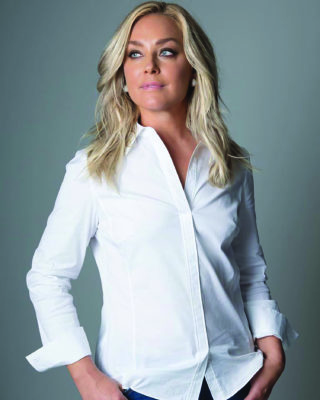 Elisabeth Röhm kicked off her acting career with a four season run on the hit television series Law & Order. Being a young actress on a long-standing television series, Röhm had the opportunity to learn from many seasoned professionals in Hollywood, which she says shaped her career and future as an actress.

“I think really what I gained as an actor was a tremendous work ethic of positivity,” Röhm said. “Really servicing the story and doing the work as an actor for your character and not being so swept up with the fantasy of it all. Because of the fact that my colleagues were Jerry Orbach and Sam Waterston, I mean, those are real actors. I never was in my 20s in environments where I developed bad habits about a sense of entitlement based upon being an actor.”

Law & Order was Röhm’s longest appearance on a single television series, which gave her the opportunity to build long-lasting relationships with many of the cast members.

“It’s not like I was working with kids my age,” Röhm said. “I think there is a way of looking at a career like you’re like a lifer. I’m a lifer actor. At the time when I was young enough to develop bad habits, I was lucky to work with such seasoned pros. I think that I got a very strong sense of how to build a character, how to do really deep work and how to have a strong work ethic. But also how to not take it all too seriously and have balance in my life, which I think has carried me really far.”

In many ways Röhm feels her character on Law & Order, Serena Southerlyn, mimicked her true personality, always wanting to find the good in people, even when she was faced with the realities of crime and violence as a prosecutor.

“In my heart there’s this belief that people are good, not that people who do bad things aren’t bad, but that the spirit of human beings in general—that there’s hope for us,” Röhm said. “I think that Serena had that idealism and I do too.”

After Law & Order concluded its final season, Waterson wrote a speech commemorating some of the hard work cast members on the show had accomplished throughout the years.

“On my last day of work, Sam Waterston wrote a speech. He said, I came into Law & Order with a blow torch of happiness, and I have a child-like enthusiasm for life,” Röhm said. “I like to have fun. I like to treat people kindly. I want to make an impact. I want to make a difference. And I think that I do have that child-like enthusiasm and idealism, and belief in humanity. I’m never surprised when people are kind because I know inside of us is all this hope and desire to evolve and to be happy. That doesn’t mean that there aren’t criminal minds, degradation, despair, poverty and violence.”

Appearing in Law & Order and learning from such seasoned professionals at the start of her career allowed Röhm’s acting career to flourish. Since the show concluded 20 years ago, Röhm has landed roles in many movies and television shows including most notably American Hustle, Magnum P.I., Bombshell, Jane the Virgin, NCIS and Heroes. Röhm’s appearance in American Hustle is another career highlight she says. Under the director of David O. Russell, Röhm learned to explore a more creative side and play characters, which are different from her own physical and personal attributes.

“I think that shooting American Hustle for me was a really tremendous highlight of my career because of the caliber of direction from David O. Russell and the actors Christian Bell, Bradley Cooper and Jennifer Lawrence,” Röhm said. “The level of creativity was on such a profound level that it was an entirely new experience. I had never really played characters that were so different from me physically. I think learning to really build a character in new a way with David O. Russell really changed my career completely.”

“I’m building these talks called Röhm Reveals,” she said. “They’re panel conversations about how we can fill each other’s cups and stop running on empty and white knuckling it through our lives pretending to be happy, when that doesn’t serve us at all. Instead, let’s tell each other the truth about how we feel about life and how challenging each of our lives has been in different ways so that we can relieve each other of the stress of having to pretend that life is so great. Once we face the truth that life is not great sometimes and life is painful and people hurt us; we were relieved of the pressure of having to live with those secrets. At this age for me to be building those talks, you know, sort of mirrors 20 years ago when I was playing Serena. Serena had an idealism that I still feel is very relatable for me personally.”

To listen to previous episodes of Röhm Reveals, visit www.wheninrohm.com/rohm-reveals-03/.

Röhm recently finished filming the Lifetime movie Mortal Danger. The movie, which is set to launch later this year, tells the true story of a victim of domestic abuse and her life saving journey to help other women in domestic violence situations.

She will also be appearing in a number of films including Notorious Nick, Starbright and Ballbuster, which are currently in the post-production phase. Röhm is also on-set filming a thriller, The Runner, which features a troubled teenager who is forced to go undercover to bring down a dangerous drug king pin. Keeping busy and following her passion for crime series and the law, Röhm is also working with A&E to develop a show which documents true crimes.

“I’m very fascinated with criminal cases. I come from a legal family. My dad is a lawyer. So I feel like in a way, I’m an honorary lawyer. If anybody needs any legal advice, I’m available,” Röhm laughed.