The legend of the American chuck wagon in the Old West

The era that encompassed what came to be known as the “Wild West” only lasted for a period of about 30 years during the late 1800s. But thanks to the never-ending cattle train of westerns in pop culture, the “Old West” of cowboys, Indians, lawmen and gunslingers never actually rode off into the sunset.

But along with those gamblers and outlaws that defined that period in American history, one class of characters often gets overlooked. These rugged, surly men kept bellies full during long rides on the trail, slinging whatever meat they could find, lots of beans, some fry bread and coffee as black as the seat of a gold prospector’s pants. The man was known as “cookie” and he helmed the chuck wagon.

The American Chuck Wagon Association traces the history of these mobile kitchens to just after the end of the Civil War in the 1860s, when a massive western expansion carried settlers across the young country toward the Pacific Ocean. That expansion created an insatiable market for meat on the hoof—otherwise known as beef, primarily from Texas. Cattlemen knew a quick buck when they saw one and enterprised to move herds of cattle to market, without the luxury of railroads. These frontiersmen moved herds over land for hundreds of miles, giving birth to trail drives. 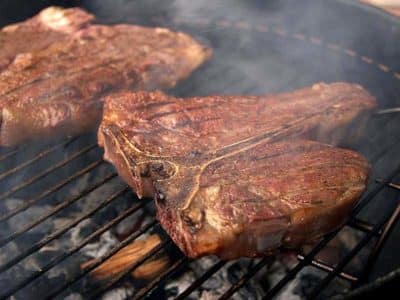 The work was tough and kept people on the trail for months at a time. And if there’s one thing that’s always been true about hard work, it rustles up a mean hunger. Before chuck wagons rolled into frame, cowboys had to subsist on whatever dried meat they could carry in their saddle bags. This meant meal after meal of dry meat tougher than the boots on their feet and half as nutritious. The first chuck wagon is said to have been born in 1866, thanks to a cattleman by the name of Charles Goodnight, who knew cowboys worked harder and better with full stomachs.

As mentioned earlier, the cookie was the man in charge of all the meal prep. But more than that, the cook was typically also the cattle drive’s barber, banker, dentist, letter writer, dispute settler and, should it come to it, coroner. His normal day started hours before others, rousing his tired bones at 3 a.m. in order to start the arduous process of prepping the day’s food. The day always started by grinding roasted coffee beans for his special blend of black tar. His wagon’s pantry was loaded with flour and water for biscuits, fresh eggs, vegetables, dried pork and beans. As for beef, ranchers normally weren’t keen on allowing their hoof money to be slaughtered for food, but every so often a weak or injured steer would be dispatched in order for the cowboys to get some protein.

Cookie always had a pot of fresh beans at the ready throughout the day and night, but as you might have guessed, meat did not preserve well without refrigeration back then. As such, any leftover chunks of beef would be wrapped during the day and unwrapped at night to be kissed by the cool country air. And with all that beef, one of the most common dinners served was a beef stew commonly called “son of a bitch stew”—though the name was often changed to “son of a gun stew” around soft ears, young folks and delicate ladies. 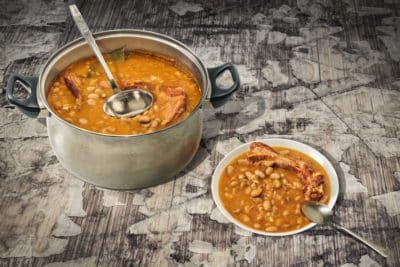 As railroad tracks were laid across the country, cattle were eventually transported via stock cars, which pretty much ended the era of the cowboy. With ranchers no longer needing to move herds across the untamed landscape, the cattle drives ended as quickly as they began. But luckily for cookies, chuck wagons endured as camps were often set up at markets where owners presented their steer for sale. These days, chuck wagons are a novelty item, feeding guests at rodeos and barbecues along the prairie. One might argue that the modern food truck phenomenon owes much of its success to the days of cookies and chuck wagons.

So what of chuck wagon etiquette? According to the site Legends of America, the rules are aplenty. First and foremost, no one eats until Cookie calls. And when Cookie calls, everyone comes a runnin’. 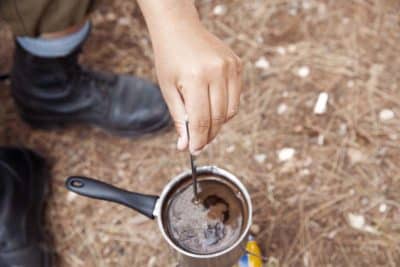 Cowboys eat first, talk later and it is more than OK to eat with your fingers. The food is clean.

If you’re refilling the coffee cup and someone yells “Man at the pot,” you’re obliged to serve refills. As expected in basic manners 101, don’t take the last serving unless you’re sure you’re the last man. And let it be known that food left on the plate is an insult to the cook. There is to be no running or saddling a horse near the wagon. When you do ride off, always ride downwind from the wagon.

If you come across any decent firewood, bring it back to the wagon. And as common hospitality states, strangers are always welcome at the wagon.

To try your own hand at chuck wagon cooking, start with these two simple recipes. For more, visit www.legendsofamerica.com/we-oldwestrecipes.

Kill off a young steer. Cut up beef, liver and heart into one-inch cubes; slice the marrow gut into small rings. Place in a Dutch oven or deep casserole. Cover meat with water and simmer for two to three hours. Add salt, pepper and hot sauce to taste. Take sweetbreads and brains and cut in small pieces. Add to stew. Simmer another hour, never boiling. Serve.

Heat the milk over the stove or in the microwave until warm but not hot. Pour into a large bowl and add yeast and sugar. Stir in beaten eggs and salt, then slowly mix in flour until mixture forms a smooth, elastic dough. Cover with a towel and allow to rise until double in size (30 minutes to one hour). Lightly flour work surface and divide dough into 12 pieces roughly the size of tennis balls, then flatten into discs. Let dough rise again, about 10 minutes. Heat oil to 350 degrees in a deep fryer, large pot or skillet. Fry dough discs one or two at a time for three to five minutes, depending on size, turning once. Makes about 12 servings.