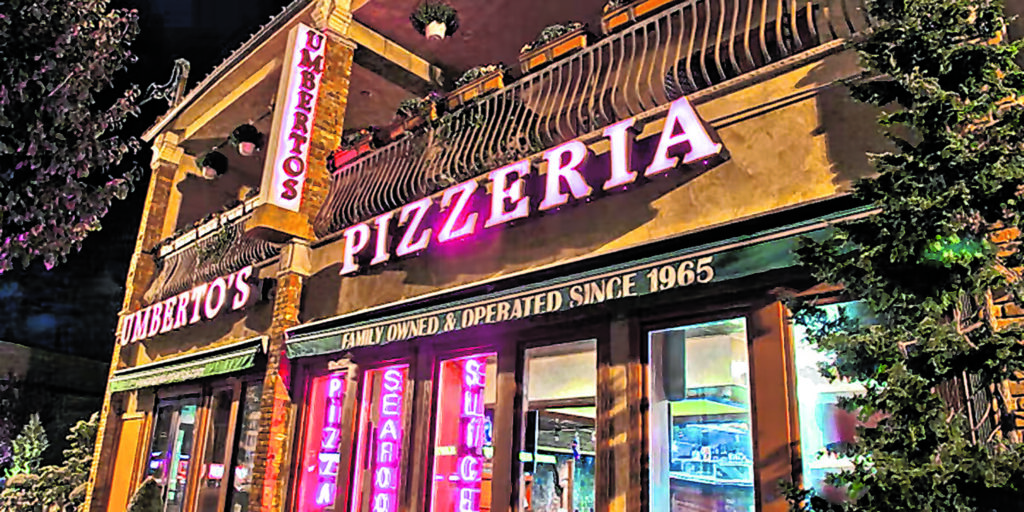 Eat at Original Umberto’s of New Hyde Park
The Original Umberto’s of New Hyde Park Family Restaurant opened in 1965 by Umberto Corteo, his brother Joe, and eventually his brother Carlo. The small pizzeria has grown into a two-story full-service café, four-star dining room and a world-class banquet facility, now including an outdoor, tented patio. The family-run business has also opened locations in Bellmore, Lake Grove, Massapequa and Manhasset. At the very least, if you cannot decide from the dozens of appetizingly delicious menu items, try either a Sicilian slice (rated best Sicilian pie in New York) or a Grandma slice (once featured on the Food Network).

McDonald’s at the Joseph Denton House
The Joseph Denton House is a historic building in New Hyde Park within the Town of North Hempstead. It was built in 1795 as a farmhouse, then it was converted in the 1860s to a Georgian-style mansion. After WWII, the home was sold before becoming a funeral home and then a series of restaurants.

McDonald’s acquired the dilapidated property in 1985, intending to demolish it and build a standard structure. North Hempstead and residents of the New Hyde Park community successfully sought historic designation after a three-year battle. An agreement was reached with McDonald’s to allow a single-story addition to the back for a drive-thru if the front exterior was restored to its 1926 appearance. After an extensive renovation which included installing a series of windows for the veranda, and restoration of the ornamentation, window shutters and brick chimneys, McDonald’s opened in the historic building in 1991. The inside of the building was gutted in the process, including exposed rafters. A grand staircase leads to a dining area on the second floor. Visit www.bobbhowardsgeneralstore.com to learn more about old-time candies, the history of the general store or to place a special order.