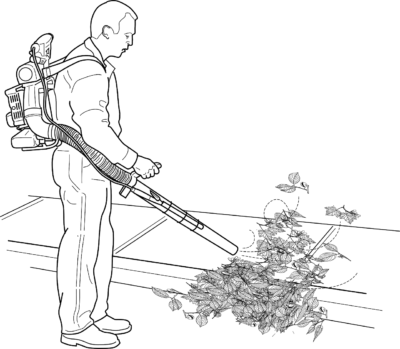 In November 1968, the government of Nassau County invited the local media to Eisenhower Park to show off another money and time-saving innovation. Strapped to the back of a Department of Public Works staffer was a gas-powered, two-stroke engine leaf blower, and he proceeded to clear an acre of leaves. It was likely the first time the reporters had seen one. The reports raved. I wonder if they clapped and took turns.

For years, no single issue has generated such consistent, broad-based, often-emotional support readers than restricting gas-powered leaf blowers (GPBs). These essays exist partly to signal to local decision-makers that certain subjects are now safe for consideration and public discussion. I am talking to all of you like a Dutch uncle: This is safe.

And in the past few years, this game has changed in very important ways.
This used to be mostly about noise, a whine which most find jarring and from which mothers with babies, seniors and the disabled can’t easily escape. That was bad enough.

Now it’s about swallowing doo-doo. Animal feces. And fur, tiny pebbles, dust, pollen and anything else that these devices launch at high speed into the air where it is suspended and slowly sinks to a neighbor’s lawn, car, porch, window and exposed personal orifice.

Inefficient two-stroke engines spew out a cloud of raw carbon monoxide, nitrous oxides and other carcinogenic hydrocarbons. The smell can last for a couple of hours.

Last year, the Medical Society of the State of New York (MSSNY), which is based right here in Nassau County, passed a strongly-worded resolution urging the state and GPB manufacturers to develop new guidelines for how these machines are used, with an emphasis on “dramatically” reducing toxic emissions and the use of non-polluting alternatives.

We know so much more than we used to about the dangers of swallowing and breathing fine particulate matter to the lungs, heart and other organs. We know more about allergies and asthma, especially in children.

Within a decade, most Americans will be independent workers, many working from home. This isn’t going away. It’s going to build.

You don’t need GPBs to push leaves a few feet on a typical 50 by 100 foot property.

Changing gardeners won’t solve the problem. Neighbors have to be on the same page.

The efforts of some public officials to negotiate a compromise, such as we saw this year in Hempstead and North Hempstead, are appreciated but seem to miss a point. These proposals merely extended the hours blowers are restricted. The noise is no longer the main issue for many. Southampton’s creation of an official “Green Zone” banning blowers in an East Quogue park is a better model. Super-hot suburb Maplewood, NJ, (dubbed “Brooklyn West” by realtors and the Times) voted for quality of life by shutting down GPBs from May 15 to September 15.

Twenty years ago, some landscapers were willing to discuss compromises on this issue, such as slow phase-in of a ban. Now the denial seems more aggressive. With the economy changing again and more competition than ever, they are feeling the pressure to cut corners.

Real-life experimentation shows that claimed hardships of switching to safer, quieter equipment aren’t so hard. I’m sorry, but any business which relies on making people sick or ruining the quality of suburban life shouldn’t get to call the shots.

Many officials fear the landscapers, who demonstrate that they are well-organized.
The rest of us have to assure our representatives that they are on safe ground, that they will be protected and cherished if they do what is right.

Michael Miller has worked in state and local government. The views expressed are not necessarily those of the publisher or Anton Media Group.