It Was A Very Good Meal

Most Italians are obsessed with the food of their homeland, so it should surprise precisely no one that Frank Sinatra loved the cuisine of Italia. The native son of Hoboken, NJ, and immigrant parents Natalina and Saverio, Sinatra enjoyed a well-publicized fixation with Italian fare—especially at the New York City institution Patsy’s.

Fittingly located in the city’s Theater District (at 236 West 56th St. between Broadway and Eighth Avenue), Patsy’s serves food akin to a show-stopping swinging Sinatra number. Ol’ Blue Eyes reportedly frequented the restaurant quite often, entering through a special door to sit at a reserved table on the second floor. But it wasn’t just the food that lured Sinatra in, it was the loyalty.

According to Patsy’s lore, Sinatra once made a solo reservation at Patsy’s on Thanksgiving, without realizing the restaurant was to be closed that day. Not wanting to turn Sinatra away, but also not wanting him to feel badly about the restaurant being open only for him, owner Patsy Scognamillo took the reservation and filled the restaurant with the staff’s families. It was a gesture that Sinatra didn’t learn about until years later. 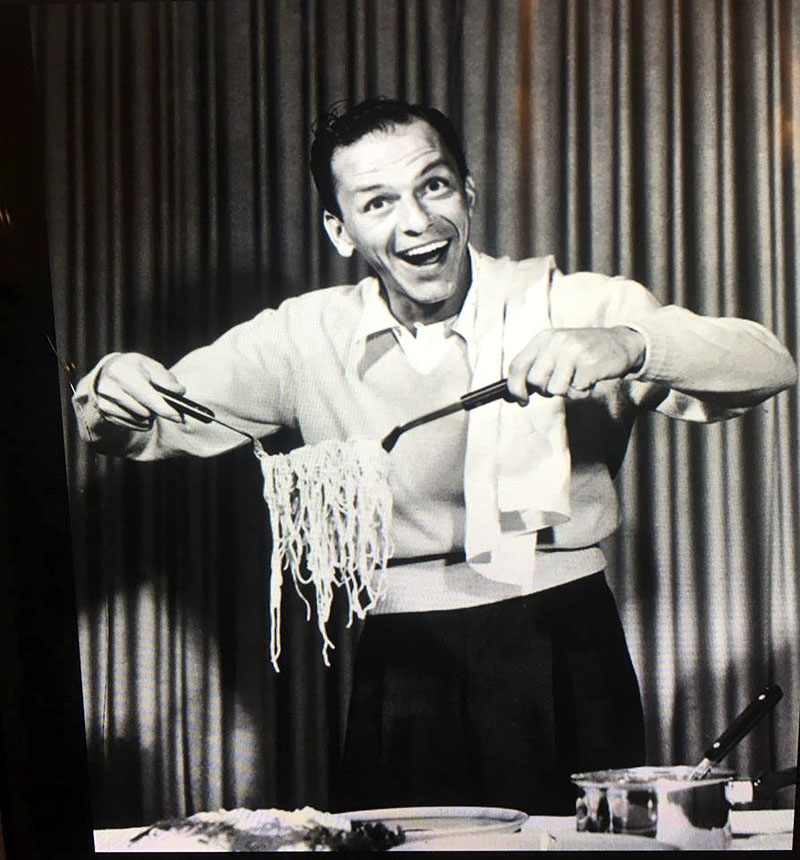 While gestures are nice, it’s the food that ensures restaurants are remembered. In 70 years of existence, Patsy’s has only been helmed by three head chefs—Pasquale “Patsy” Scognamillo, his son Joe Scognamillo and Joe’s son Sal Scognamillo, who has manned the kitchen for the past 25 years. That is a level of consistency unheard of in the New York City restaurant scene.

Sinatra knew that he could count on that consistency no matter when or what year he popped into Patsy’s. On what would have been the crooner’s 102nd birthday last Dec. 12, Patsy’s posted on its Facebook page, “Frank would often have two servings of the Clams Posillipo followed by the Veal Milanese, which he wanted prepared extra-crisp. Other times he might have the Arugula Salad followed by the Fusilli with Garlic and Anchovies.”

The restaurant even shared the recipe for the veal dish, reprinted here from Facebook:

1. Break or cut the bread into large chunks and place in a food processor. Process until the bread is reduced to fine crumbs. Transfer the crumbs to a large bowl and stir in the cheese, oregano and parsley. Gradually add 3 tablespoons of oil, stirring, until thoroughly combined. Season with salt and pepper.

2. Spread the flour on a large plate, place the eggs in a shallow bowl, and spread the seasoned bread crumbs on a second large plate. Coat each veal cutlet in the flour, then the beaten eggs, and then the bread crumbs, patting with the palm of your hand to ensure adhesion.

3. Heat 1 cup of the oil in a large nonstick skillet over medium-high heat (to a frying temperature of 350 F) and sauté the veal for 2 minutes. Turn and sauté for 1 additional minute. Do not crowd pan. If necessary, fry the cutlets in batches. Remove with a slotted spatula and drain on paper towels. Season to taste with salt and pepper, and serve with lemon wedges.