When I arrived at Skate Safe America for a recent practice session with the Long Island Roller Rebels (LIRR), an all-female roller derby league, I wasn’t really sure what to expect, other than to make sure I had an ice pack ready. I imagined my best case scenario was being very sore, the worst case was being rolled out on a stretcher.

Despite the very real threat of injury, being a derby girl has always charmed me. I spent most of my 9-year-old summer on skates, and ever since watching the movie Whip It in college, I’ve been fascinated by derby culture and the strong, confident women who play.

They have clever nicknames, wear cool uniforms and are tough as nails. And while all that is true, getting a chance to hang with the LIRR taught me that derby is a lot more than putting on a show while wearing cool fishnets and skates.

Roller derby, which is played by two teams of five skaters who score points by passing members of the opposing team, is a high contact, physically demanding sport. Since most of my derby knowledge came from a fictional movie, the majority of my derby prep work included digging sporty leggings out of the back of my closet and firming up my derby name (Babe Lincoln). But as I laced up my sneakers for the cardio portion of practice, I soon realized that there’s a whole lot more to being a derby girl than aesthetics.

These women are hardcore athletes. Practice, which involves cardio, skating and blocking drills, takes place at least two to three times a week and many of them also do cross-training and exercise on the side to keep their bodies in peak shape.

“I think a lot of people have the misconception it’s fake or for show, but in the past five or six years, derby’s become an athletic sport,” said Becca Cleary, who goes by the derby name Belligerent Bex.

Meredith Heller, known on skates as Merry Death Star, agrees, saying that derby is much more than a spectacle sport.

While I came into practice thinking my pointy elbows would come in handy, I soon found out elbowing my way to victory was against the rules. To block opponents from passing, skaters can only use their butts, shoulders, hips or do a full body slam which combines a hip and shoulder check.

And it turns out you don’t need your elbows to do some serious damage on the track; skaters have suffered broken bones, fractures, sprains and in one story I heard, even paralysis.

Because of the risk, safety is paramount. Skaters wear wrist guards, elbow and knee pads, a helmet and mouth guard. They’re also required to take a written test on the rules, as well as a physical skills test to make sure they can hold their own on the track.

And while derby is not a sport for the faint of heart, it does provide a strong sense of comradery, or “derby love.” The girls say the family-like atmosphere is one of the best parts about being on the team.

“Everyone on our team gets along really well, both on and off the track,” Cleary said. “Everyone is friends and we all hang out outside of derby together. It’s a real community.”

The fact that all the girls on the team can get along is even more impressive because of their diversity. The women range in age, educational backgrounds and professions. And different body types are not only welcome in derby, they’re an advantage.

“Derby was a sport designed with women in mind,” Heller said, noting that a lot of the physicality of the sport has its benefits in the female body. “It was really designed for women to get out there and show how aggressive, but beautiful we can be.”

Melanie “Femme&M” Morgan said the body positive culture was one of the biggest draws for her to join derby.

“Seeing all these different girls is not what you usually see,” Morgan said. “In this sport particularly, every body type has a strength. You use what you have.” 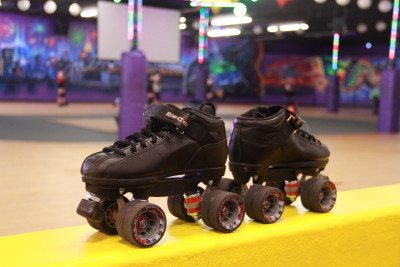 Practicing with the LIRR did fulfill a bit of my derby dreams, but more than that, it was great to see a group of ladies from all walks of life have their paths cross because of a sport that so many would think is absolutely crazy. And while I have no doubt they could hip check me into next week, the LIRR girls are also some of the nicest I’ve ever met. More than just teammates, these girls are friends, and the laughter and good spirit they share is contagious.

Though I’m not an official derby girl yet, I am keeping my skates out of storage. If it doesn’t happen now, there is always the chance it could happen in a year or two, or if I’m like some LIRR members, in 10 or 20 years. And if not, at least I learned some tips on how to hip check.

See the LIRR in all their glory at their next home game at May 14 at Skate Safe America. Visit www.longislandrollerrebels.org for more information.