To promote his latest novel, DeMille will be at The Book Revue in Huntington on Thursday, May 28, at 7 p.m., for a talk, question-and-answer session and book signing. On Tuesday, June 2, at 7 p.m., a comparable event is being held at the Carle Place Barnes & Noble located at 91 Old Country Rd. The best-selling author’s fans can also greet DeMille at a book-signing on Monday, June 15 at 6 p.m. at Locust Valley’s Forest Books, located at 182 Birch Hill Rd.

The longtime Garden City resident, who is a combat veteran of the Vietnam War, sat down with me recently to discuss how John Corey, his signature character, finds himself at the start of Radiant Angel with a dead-end federal surveillance job in Manhattan after his high-profile adventures in Yemen as a part of the Anti-Terrorism Task Force. The retired New York Police Department (NYPD) detective is about to be living by himself because his wife, Kate Mayfield, has accepted a new posting in Washington, DC, while moving up the ranks at the Federal Bureau of Investigation (FBI). “Kate Mayfield’s career is arcing while Corey’s has flattened out,” DeMille said, when asked about the primary cause of tension in their marriage. 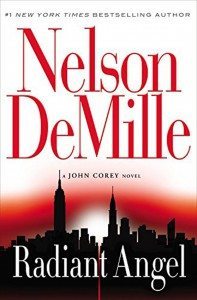 “Corey knows too much and the federal government wants him on the team without being part of the team,” DeMille said, explaining how Corey is now working for the FBI’s Diplomatic Surveillance Group. “All he has to do is watch diplomats and 99.9 percent of the time, nothing is going on.”

Corey, however, and his new partner, the single, 30-something-year-old Tess Faraday, are tasked with tracking Vasily Petrov, a colonel in the Russian Foreign Intelligence Service posing as a diplomat with the Russian United Nations Mission, and there’s a lot going on with Petrov. As the plot unfolds, Petrov and his colleagues attend a raucous party in the Hamptons, which continues on a 250-foot yacht owned by a Saudi Arabian prince. And while Corey and Faraday (who grew up in Lattingtown) are clearly attracted to one another, the book’s protagonist has neither the time nor the inclination to break his marital vows.

Meanwhile, Petrov, readers quickly learn in this briskly-paced suspense thriller, is in possession of a miniaturized nuclear weapon, which he plans to detonate in New York Harbor, with the unwitting assistance of the Saudi prince. Moreover, the Russians have come up with an innovative way to avoid the radiation detectors found throughout New York’s waterways, in this fictional story and in real-life.

“Thousands of ships are coming in,” DeMille said, referring to today’s situation in New York Harbor, “and the biggest fear is that one of these ships has a nuclear device on it.”

A robust and effective U.S. intelligence network is the key to thwarting these threats, he continued. By the time a rogue vessel has come into New York Harbor, “it is really too late.”

In keeping with his previous Corey novels, DeMille did extensive research with national security experts and was impressed with the way local and federal agencies are working together on these matters, especially the Coast Guard. “The Coast Guard seems to be getting short shrift at a time when national security is such a high priority,” he said, citing periodic efforts to close the Coast Guard’s Shinnecock Station in Hampton Bays.

Looking ahead, DeMille said his next book will be set in Cuba, and it won’t feature John Corey. Its publication date is tentatively set for spring 2017. In the meantime, Hollywood, which turned DeMille’s The General’s Daughter into a major motion picture, may again beckon. His son, Alex, a screenwriter who holds a master’s degree in film from UCLA, is adapting into a screenplay his father’s 1994 novel Spencerville. “We hope it will be ready this summer,” DeMille stated.

Previous articleHerricks: Missing Boy
Next articleCheck It Out: May 28 To June 4