Nelson DeMille’s upcoming novel is set largely in Cuba and has a good chance at landing at the top of The New York Times’ bestseller list when it is published on Tuesday, Sept. 19.

The Cuban Affair (Simon & Schuster) has little chance, however, of making it onto Cuban President Raul Castro’s nightstand. DeMille’s fictional portrayal of Cuba, circa 2015, highlighting the poverty of its people and the corruption of its government while offering little evidence the Obama administration’s bid to re-establish U.S.-Cuban diplomatic relations, is changing Cuba’s bleak economy and human rights record.

“If I hadn’t gone to Cuba, I couldn’t have written this book,” DeMille stated, during a recent interview, referring to the 2015 Cuban visit he made as part of a Yale University-affiliated educational tour. Yale initially pitched the trip in a direct-mail piece to DeMille’s son, Alex, a Yale graduate. “When you go to a country, the whole thing changes for you. It was probably a trip I should have made years ago.”

The Cuban Affair’s main characters are 35-year-old Daniel MacCormick, a U.S. Army veteran who saw action in Afghanistan and is now operating a charter fishing boat in Key West, FL, and Sara Ortega, a 30-something-year-old Cuban-American architect from Miami who recruits MacCormick for a special mission to Cuba. Like DeMille, MacCormick and Ortega enter Cuba in 2015 as part of an educational tour group. Unlike DeMille, the two characters ditch the tour group in search of hidden—but not forgotten—assets which were abandoned by Cuban exiles and stashed in a cave when the late President Fidel Castro came to power on New Year’s Day, 1959. 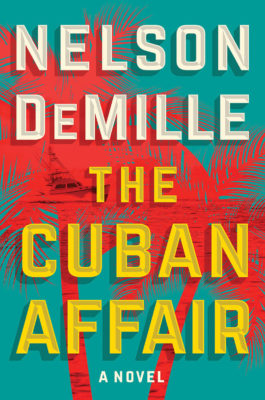 “Most of the people who came to Miami when the Communists seized power left houses, factories, and huge businesses. They want their property back, and that’s going to be a big issue as normalization moves forward,” DeMille said, referring to the real-life Cuban exiles and the Cuban government’s long-ago seizure of the island nation’s private property. “The regime is saying they have no intention of returning Cuban citizens’ property.” In much of the media coverage devoted to improving U.S.-Cuba diplomatic relations, this issue is rarely discussed.

Part of the reason for this, DeMille recognizes, is people have to be a certain age to have a living memory of a time when one of the Castro brothers was not atop Cuban society or controlling the nation’s foreign policy. Indeed, even the fictional MacCormick and Ortega were born in the 1980s so it is up to guys like MacCormick’s side-kick, the 70-something-year old Jack Colby, to offer up pieces of old-man wisdom. Colby and DeMille are both combat-decorated Vietnam War veterans.

“The people who populate this story fall into two camps: those who are happy and hopeful about the Cuban Thaw, and those who are trying to derail it, and this is a main theme in the plot,” DeMille wrote, in a note to book reviewers who had access to advance copies of his latest work.

The buzz for The Cuban Affair is starting to build. In its starred review, Publishers Weekly said The Cuban Affair was an action-packed, relentlessly paced thriller, and added that a “line from the novel perfectly describes this page-turner: ‘Sex, money, and adventure. Does it get any better than that?’”

DeMille, a longtime Garden City resident, will be conducting a national book tour in support of this project, the first of his 20 works of fiction to be published by Simon & Schuster. On Thursday, Sept. 21, at 7 p.m., he’ll be at Book Revue, 313 New York Ave., Huntington. The next night, Friday, Sept. 22, at 7 p.m., DeMille will visit Barnes & Noble, 91 Old Country Rd., Carle Place.