Angela Anton - From The PublisherFeaturedNews 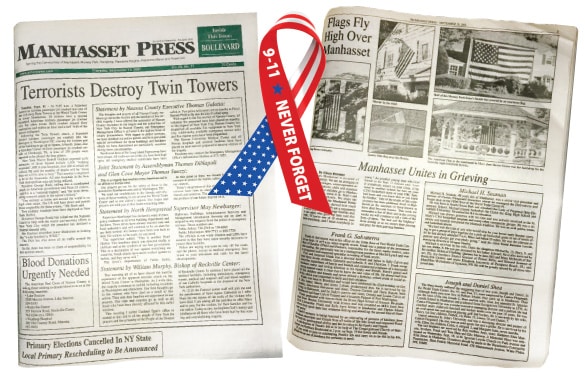 It happened 18 years ago and shockingly enough, memories of the terrorist attacks of September 11, 2001, will someday be as distant and forgotten to Americans as Pearl Harbor or the sinking of the RMS Lusitania are today.

In journalism, as the sportswriter Jerome Holtzman maintained, there is no cheering in the press box. And so here at Anton, there was no time for shock on that Tuesday morning. That day is when the “big four” papers—Manhasset Press, Great Neck Record, Port Washington News and Roslyn News—are put to bed. Page ones and sports pages, plus the calendar, are expected to be completed early on. Weekly papers generally don’t work on last-minute deadlines. That day was different.

As your servant was leaving his northern Queens residence, the television showed the World Trade Center lit up by what broadcasters speculated was an airplane accident, a plane probably coming from Teterboro Airport. I recalled an accident that took place during World War II, when a military cargo plane, on a dark, foggy, rainy day, crashed into the Empire State Building. This was the same thing. Except it wasn’t. The second plane zeroed in on the second tower, igniting a huge, terrible explosion. Who can forget it? The British novelist Martin Amis, a resident of Brooklyn, captured the meaning of the second plane. “That was the defining moment,” he said. “Until then, America thought she was witnessing nothing more serious than the worst aviation disaster in history; now she had a sense of the fantastic vehemence ranged against her. That second plane looked eagerly alive and galvanized with malice, and wholly alien. For those thousands in the South Tower, the second plane meant the end of everything. For us, its glint was the worldflash of a coming future.”

Off to work. Anton was blessed with great leadership, namely in the person of Cary Seaman, the managing editor. We had deadlines. Tear up the paper and start again? Seaman was on the phone early on and quickly so. In no time, she gathered quotes from people who mattered: The county executive, the supervisor of the Town of North Hempstead, state legislators, mayors and the Bishop of Rockville Centre.

That was Tuesday. The days and weeks ahead were filled with vigils, memorial services and funerals. Everyone has a story to tell. A few days later, your servant received a call. At the time, I was editor of The Roslyn News. On the other end was a longtime Roslyn resident, a senior citizen calmly­—and I emphasize that word—telling me that her two sons, one a fireman, the other a policeman, were confirmed among the dead from lower Manhattan. In East Hills, another senior citizen, a man who had escaped the Holocaust, now lived to see a granddaughter perish in one of the towers. Editors of publications in the Anton orbit dutifully counted the dead from their villages, attending the same services and trying to give the departed the honor they deserved. The memorial service for Thomas and Peter Langone took place over a year later. Giving a talk was the governor of Oklahoma, Frank Keating. In 1995, Tommy Langone, who like his brother was also a volunteer fireman for Roslyn Rescue, traveled to Oklahoma City to assist in the restoration work of that city’s own terrorist attack. That memorial was the most moving day in the village’s history.

Another memory? Like a good Catholic, one must confess: I misspelled the last name of one of the victims. It’s all true. The widow wrote a letter. The widow also called my desk. In both instances, a severe tongue lashing came my way. Sit there and take it, boy. Which I did. Hopefully, it was cathartic for the wife of the deceased to deliver a verbal whipping to the thoroughly guilty party.