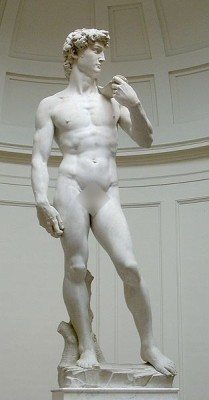 On Jan. 21, 2016, I received a most unusual award—a David Award—that was described to me as follows:

“For each of the past 15 years, every January Networking Magazine has honored eight exceptional men—Renaissance Men—who have performed generous and unselfish acts for the benefit of us all. The David Awards are named for David, the giant slayer, who represents the Renaissance ideal man memorialized by Michelangelo’s famous 16th-century statue of David. Each of our honorees has been a true Renaissance man having excelled in business or academics and also accomplished outstanding heroic and humanitarian acts.”

I thought that I would make this column a little more personal than usual and share my remarks here.

Having been selected for this honor led me to consider, “If I am David, then who is Goliath in my life?” I can think of many but I’ll share just two with you.

On the same day in late September that Networking Magazine publisher Christine Sheahan delivered the good news to me about this honor, my doctor called with the results of a biopsy and PET scan. She said that my cancer, which had been in remission for five years, transformed into something more aggressive. It was rapidly spreading and required immediate treatment.

In fact, if the David Awards breakfast was held just one week earlier to the day, instead of my sitting on the dais you would have found me seated in a recliner at Sloan Kettering, hooked up to an IV, and receiving what I am hoping will be my last infusion.

I tell you about my personal Goliath not for your sympathy. I tell you because I know I am not alone in this room of several hundred people. I salute my fellow cancer survivors and family members of those who have battled cancer.

Although my first Goliath is more personal, and now public, my second Goliath is more insidious. It cannot be slain by science and medicine, and it demands the attention of our hearts, minds and souls.

My second Goliath is stigma—the stigma that brings shame to people with mental illnesses and addictions; the stigma that denies them the sympathy and support that I have received in abundance while battling cancer.

Please understand that no parent would hesitate for even a moment to get help for a child with cancer. However, parents who have a child suffering from a mental illness or addiction wait weeks, months and even years to ask for help. Stigma causes many to hide and retreat, rather than stand and advance.

Stigma has two co-conspirators. They are the government and the health insurance industry. Government neglect and corporate greed represent nothing less than institutional child abuse and neglect that prevent sufferers from choosing and accessing life-saving treatment options. This is a clear denial of
civil rights.

Defeating the Goliath stigma is a good start. It requires that we make a collective commitment to treating illnesses above the neck the same as illnesses below the neck.

If my being a David Award winner helps to inspire that, then I will truly feel a worthy recipient.