Dropping Of The Roses Ceremony: Dec. 7 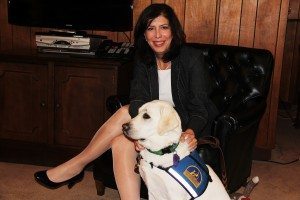 Sometimes people just don’t get the job done. When that’s the case, man’s best friend usually does the trick.

At the Nassau County District Attorney’s office, Mega, a white Labrador, assists citizens to open up and be more comfortable with the issues they are discussing. A facility dog, Mega is trained to assist people through traumatic situations.

Mega endured a six-month training program, which taught her over 52 commands. Equipped with a dog’s common skill set of sitting and heeling, Mega can also walk on both sides of humans, turn lights on and off, open drawers and tug things around. Mega’s most effective command is when she lays her head in someone’s lap, which helps calm a victim to talk more about their tragedy.

Acting DA Madeline Singas loves having Mega around and said that everyone looks at her like another employee because of the immense impact she has on all the people she encounters.

“As soon as she walks into a room, because she’s so gentle and she’s so open, you can just feel all your worries melt away,” said Singas.

Mega is mainly used in the Special Victims Bureau, which focuses on the sexual abuse of women and children, domestic violence, crimes against children and crimes against the elderly.

“She’s one of our employees,” said Singas. “Her job is to just help soothe and relax our victims and witnesses.”

Mega is often confused for a therapy dog, which are usually just trained in basic obedience training. She is certified with the Americans with Disability Act—being exceptionally well-trained in specific duties. With her 52 commands, Mega can assist in many areas—from helping people in wheelchairs to easing tension in a stressful situation.

Mega works well with children, because she excites them with her many action-packed commands. When they see her turn on lights and open drawers, they become more interactive with her, which allows them to further their conversations and relieve stress.

“It’s a very traumatic experience for people to come into the DA’s office and talk about some horrific crime that was committed against them,” said Singas. “And having someone like Mega there to pet, it helps them tremendously.”

Victims react differently to Mega’s services, but she brings them something a human cannot. For some, it helps speed up the process, and Singas said that she sees the difference she makes when she’s in the room. While all victims are different, Mega figures out how to assist each individual person by picking up on cues and adjusting her personality to theirs.

When victims enter the DA’s office struggling to cope with traumatic experiences, many resist. Opening up about a sexual crime or domestic violence becomes difficult. But, just as it seems impossible to talk about these events, Mega’s warm heart and uplifting spirit touches the victim and allows him or her to take one more step toward recovery.