Guglielmo Marconi may have started working on the idea of building a commercial wireless telegraphy system in 1894, but when WLIR launched its Dare to Be Different format on Aug. 2, 1982, the effect it had on both the radio and music industries was seismic. This and much more is captured in Dare To Be Different—WLIR: The Voice of a Generation.

Directed by Plainview native Ellen Goldfarb and written by her brother Jay Reiss, this 95-minute documentary focuses on the five-year period when the 3,000-watt Hempstead-based station was championing artists coming out of the UK that weren’t getting airplay on other places on the dial like 50,000-watt behemoths like WPLJ and WNEW.

Led by program director Denis McNamara (who is also an executive director on the film), 92.7 FM was where listeners not only heard new names like The Cure, The Police, U2, Depeche Mode, New Order, Duran Duran and The Smiths, but acts coming out of the CBGBs scene (Blondie, The Ramones, Talking Heads) and newer American acts (R.E.M., Prince, The Replacements, Madonna). By the time the original WLIR lost its FCC license on Dec. 18, 1987, that station had been responsible for introducing upwards of 700 artists to the American listening audience. It made for a rabid and fanatical fanbase, which attracted Goldfarb to taking on this project several years ago. And given that she counted herself as part of this musical tribe, it wasn’t hard for her to decide to take the plunge.

“I grew up on Long Island and was always a WLIR fan. I think I conceived the idea from looking at some of the WLIR fan pages on Facebook. This was about seven years ago when I came up with the idea. I realized that there were so many dedicated fans that were still dedicated to a radio station that doesn’t exist anymore,” she explained. “I thought it was fascinating, particularly the dedication, devotion, love of the station and everyone saying they miss the station. I miss the station myself. I was always wondering what happened to it. One moment it was WLIR and then it became WDRE and then it became WLIR again. I just started to do research and saw there was a really interesting story involving the FCC and losing their license. So that’s how it started and I thought it would make a great documentary.”

The film took several years to make and was financed by a combination of forming an LLC, various Crowdfunding efforts and investments made by Goldfarb and a number of the other producers. One of the first people she connected with and brought aboard was McNamara. As the beleaguered program director of the station, which was founded in 1959 with a classical music/Broadway show tunes format, McNamara was a mainstay whose first day was an overnight shift back in 1972, when WLIR was running a progressive rock format. McNamara was the one who convinced station owner Elton Spitzer to change over to this new music format in order compete with other stations in what was then the most important media market.

“We knew that it was time [to change the format], I think [DJ] Ray White was the first person I heard who made the analogy that we were an ice skater whose legs were going in two different directions,” McNamara pointed out. “We were playing Santana and then we were playing The Ramones. Then we were playing the Grateful Dead and suddenly, we were playing Blondie. So there was a dynamic going on musically. And aside from that, it was a hugely competitive marketplace.” 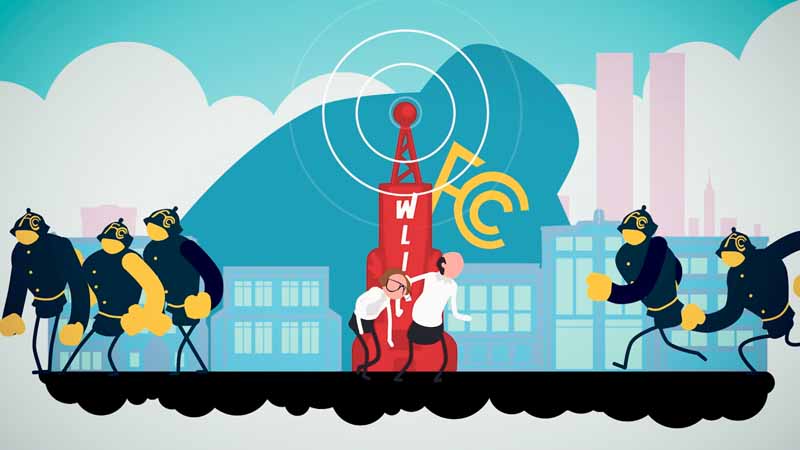 In taking the plunge, McNamara and his crew ignored major record labels not wanting the station to play these newer artists and instead teamed up with local businesses like the Rockville Centre-based Dutch East India Trading Company imprint to access imported recordings that made up so much of the station’s playlist. In the process, a number of unknown artists made their debuts on American airwaves including U2, Duran Duran and Howard Jones. It was a moment the keyboard-playing singer-songwriter remembers.

“WLIR played ‘New Song’ right from the beginning,’ Jones recalled. “I remember doing my first radio interview for American radio and it was probably New Year’s Eve 1984 at the end of 1983 and it was with WLIR. When I came over, the first station I went to was WLIR.”

Goldfarb wound up with upwards of 400 hours of footage that included interviews with a broad swath or subjects ranging from diehard fans, DJs and artists that spanned the station’s progressive rock and new music formats including Twisted Sister’s John French, U2 manager Paul McGuinness, Joan Jett, Deborah Harry and Chris Stein of Blondie and storied music industry executives like Seymour Stein. It made for some difficult editing decisions in the cutting room that leaves room for a book and DVD extras.

“The hard thing was having to cut some of the great stories we had in order to make the film flow the way it did,” she said. “Once I started the movie, there were so many people involved and so many people depending on me telling their story. And I feel honored that I was able to tell all of their stories, so I couldn’t let them down.”

For McNamara, while memories like U2 giving props to WLIR from the stage of the Nassau Coliseum during the band’s first headlining gig there on April 3, 1985, are among the many treasured memories he has of his time at the station, he also had bitter feelings about how WLIR got shut down in 1987 after the FCC revoked its broadcast license.

“I was very unhappy about how the government hung us out to dry,” he said. “I think they robbed this community of an important cultural contributor that also helped the business community and also was doing something that had ramifications that made us famous around the world.”

The documentary did give him a chance to make peace and appreciate the time and place WLIR holds in not only the historical record, but in the hearts and minds of fans whose lives where touched by its existence.

“I’m glad that we all look much smarter than we really are when you’re looking at it and there were magical accidents, but you can’t forget the people who supported you. But you also have to realize that we came upon a niche at a time where it was changing and evolution was changing,” he said. “We had the best audience in the world—look what they grew up to be. Famous citizens and professionals and the music was spreading any way. It wasn’t that we started that—we just became huge catalysts. In a chemical experiment, adding us as an ingredient just made music explode in a way that it couldn’t have. Because it’s true that even though we were a little guy, we were in the most important media market in the world. And sometimes it seemed like we were exclusive, because you couldn’t pick us up.”

Dare To Be Different—WLIR: The Voice of a Generation can be seen on Showtime.