Dancing for Their Future Gala 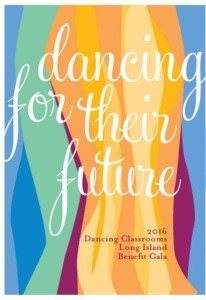 In addition, the evening will feature music by ballroom D.J. Louis Del Prete and performances by students of Dancing Classrooms Long Island, as well as hors d’oeuvres, dinner, open bar and raffles.

For tickets, $125 per person, visit www.dancingclassroomsli.org/events.

In 1994, four-time World Show Dance Champion Pierre Dulaine was performing on Broadway and in his free time volunteered at a school in NYC, sharing his love of ballroom dance. He remembered how dance had helped him as a painfully shy 13-year-old and wanted to use ballroom dancing as a tool to teach life skills such as respect, confidence, and teamwork. Dancing Classrooms is now in more than 500 schools in 31 sites around the world, inspiring the award-winning documentary Mad Hot Ballroom, the film Take the Lead, starring Antonio Banderas, and more recently, the documentary Dancing in Jaffa, where Mr. Dulaine brought together Palestinian and Jewish children in his hometown of Jaffa. His future endeavors involve working with Muslim and Christian students in southern Germany, as well as newly arrived Syrian refugee children to that area.

Nancy J. Duncan is the founding director of Dancing Classrooms Long Island, a program of CoDanceCo, a nonprofit dance organization she started in 1983. Duncan has had an eclectic career spanning more than 45 years in the performing arts, winning a Bessie in 1991 and serving as artistic director for London Contemporary Dance Theatre and community outreach programs director for Mikhail Baryshnikov’s White Oak Dance Project’s PastForward.

Darren Raymar has been the principal of Rockville Centre’s William S. Covert Elementary for 17 years, and was the first principal to bring Dancing Classrooms to Long Island. His belief in the program and his philanthrophic efforts on behalf of children and families in his district made him a clear choice for DCLI’s inaugural Taking the Lead award.

Founded in 1981, CoDanceCo, Inc. is a 501(c)(3) nonprofit organization dedicated to fostering the physical, social, and creative health of youth and adults through dance. In 2007 CoDanceCo, Inc. became the licensed National Network Site on Long Island for Dancing Classrooms: Transforming Lives One Step at a Time serving Nassau and Suffolk County schools.