During the 82 years that Frank Sinatra was drawing breath, his recording output was prolific, stretching from his 1946 debut, The Voice of Frank Sinatra right through 1994’s Duets II. With such a deep canon to trawl through, these dozen albums make the top of the list. 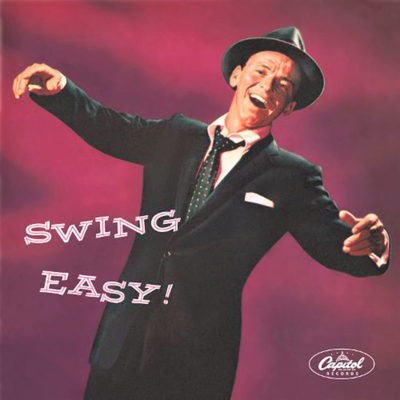 This 1954 release was his second for Capitol and first that found him collaborating with arranger Nelson Riddle. A fun upbeat outing featuring “All of Me,” “Just One Of Those Things” and “Wrap Your Troubles in Dreams.”

In the Wee, Small Hours of the Morning (Capitol) 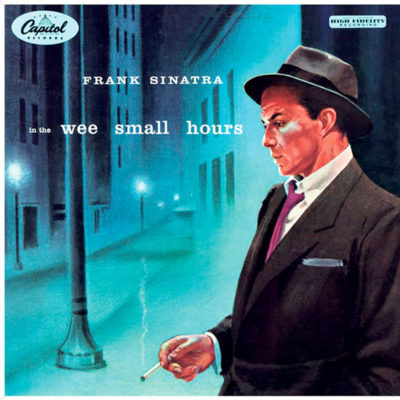 Considered by many to be the first concept record, this melancholy 1955 opus was rooted in Sinatra’s failed relationship with wife Ava Gardner. It yielded a number of the Chairman’s standards including “What Is This Thing Called Love?,” “Can’t We Be Friends” and the title cut.

Come Fly With Me (Capitol) 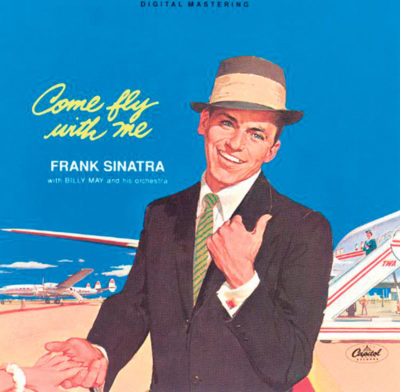 For this inaugural 1958 trip into the studio that Sinatra took with arranger Billy May, the idea for this material was to take the listener on a musical trip around the world. Mission accomplished via a combination of lively upbeat numbers (“Isle of Capri,” the title cut) and lush ballads (“Blue Hawaii,” “Autumn in New York”). 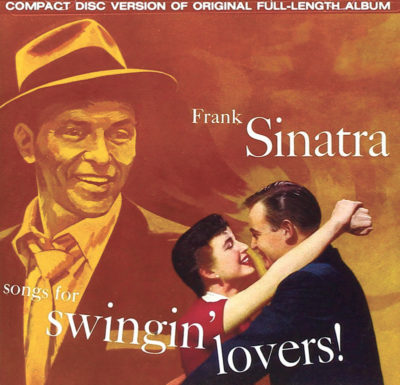 Nelson Riddle and Sinatra served up a platter of up-tempo numbers for this 1956 release that features a raft of classic, reinterpreted pop standards including “I’ve Got You Under My Skin,” “You’re Getting To Be a Habit With Me,” “Pennies From Heaven” and “You Make Me Feel So Young.”

Where Are You? (Capitol) 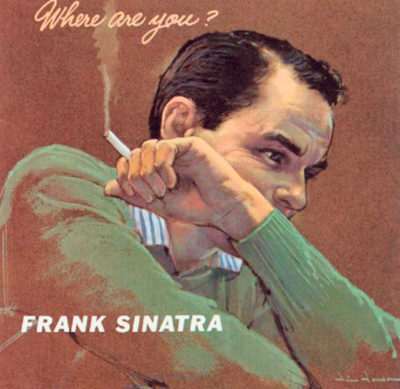 Changing gears for his third 1957 album from Nelson Riddle to Gordon Jenkins, Sinatra went down the torch song path for his first stereo recording. Jenkins’ lush string arrangements were the perfect complement to classics like “I Cover the Waterfront,” “The Night We Called It a Day” and “Lonely Town.” 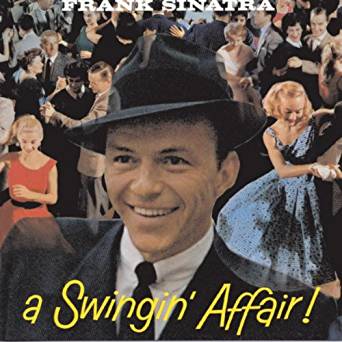 A bit more forceful than Songs For Swinging Lovers!, Sinatra’s 12th album and second 1957 release are punctuated by Nelson Riddle’s brass-heavy arrangements. Highlights include “From This Moment On,” “No One Ever Tells You,” “The Lonesome Road” and “Night and Day.”

Frank Sinatra Sings for Only The Lonely (Capitol) 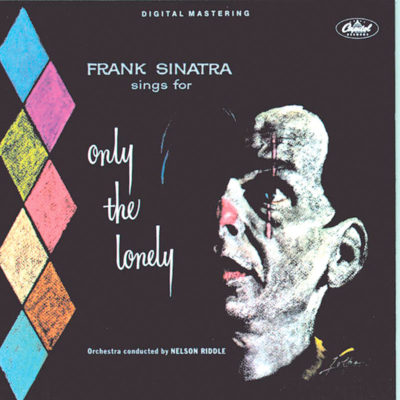 This 1958 collection found Sinatra switching from Gordon Jenkins (who was touring with Nat King Cole) and reuniting with Nelson Riddle for these down-in-the-mouth saloon songs that include classics “One For My Baby (And One More For the Road),” “Ebb Tide” and “Where or When.”

No One Cares (Capitol) 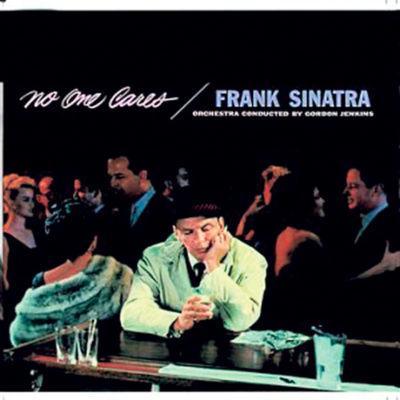 A dark enough record for Sinatra to refer to it as a collection of “suicide songs,” this 1959 sequel to Where Are You? is the second Gordon Jenkins collaboration and it yielded a number of gems including “Stormy Weather,” “I’ll Never Smile Again,” “A Cottage For Sale” and “I Can’t Get Started.”

Come Dance With Me! (Capitol) 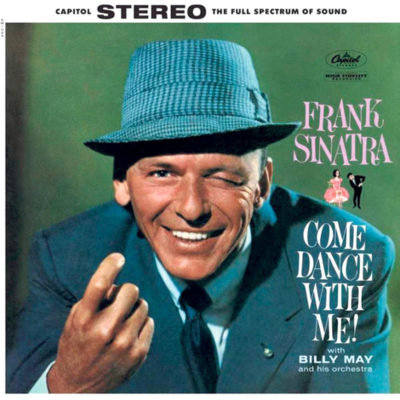 This 1959 Frank Sinatra/Billy May collaboration became Sinatra’s most successful album thanks to its hard-swinging approach and a raft of stellar songs including “Come Dance With Me,” “Cheek to Cheek,” “Day In-Day Out” and “Baubles, Bangles & Beads.” 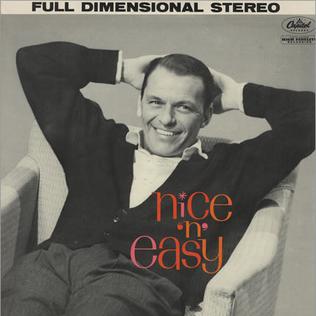 In 1960, Sinatra went back into the studio with Nelson Riddle to take a crack at a number of songs he had sung earlier in his career and record them as mid-tempo ballads. The public ate it up thanks to numbers like the title cut, “I’ve Got a Crush On You,” “Embraceable You” and “Fools Rush In (Where Angels Fear to Tread).”

September of My Years (Reprise) 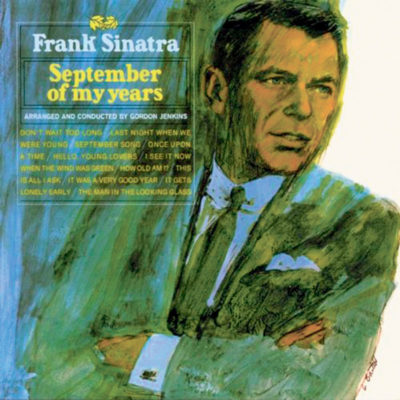 Recorded in 1965 in the year of his 50th birthday, these 13 songs found Sinatra going back to the Gordon Jenkins well a fifth time for the first time since 1962’s All Alone. Sinatra wound up coming away with material based on a loose theme of aging, reflection and regret summed up by cuts like “It Was a Very Good Year,” “Hello, Young Lovers,” “It Gets Lonely Early,” “September Song” and the title cut. 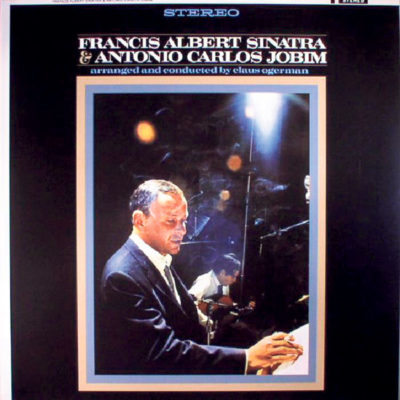 Subtlety is the key to this 1967 release that found Sinatra recording a bona fide bossa nova album in collaboration with the genre’s leading composer. Jobim’s originals line up perfectly alongside the Great American Songbook standards “Change Partners,” “I Concentrate on You” and “Baubles, Bangles and Beads,” conducted and arranged by Claus Ogerman.