Both Nassau County Executive Laura Curran and Police Commissioner Patrick Ryder credited the favorable crime statistics to law enforcement on a day meant to be thankful to those who keep their communities safe.

At a press conference on Jan. 9, at police headquarters, the two leaders were flanked by posters announcing some startling statistics.

“We are absolutely going in the right direction,” said Curran, standing with the police leadership team arrayed behind her. “Using the latest techniques and technology, data-driven problem-solving law enforcement is happening here, in all our communities, every single day.”

Adding, “this sort of thing does not happen by accident,” she went on to praise Ryder and his team and the men and women of the county’s police department.

Curran went on to note the “seamless” cooperation with federal, state and village law enforcement, the reopening of the Sixth and Eighth district headquarters, the erection of the new police academy adjacent to Nassau Community College and “the always improving relations between our communities and our police officers. It’s a big reason why we continue to see these crime [drops].”

“Crime is down in Nassau County,” Ryder said simply. “We are the safest county for its size in the country.” 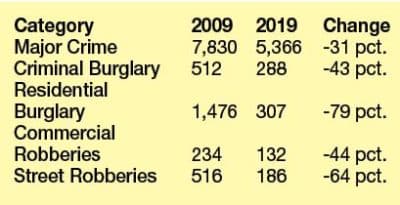 The only category that did not see a decline, according to Ryder, was grand larcenies. He attributed this to the opioid crisis and the need for quick cash by users, who burgle unlocked cars.

Ryder pleaded with residents to lock up their vehicles at night and take their key fobs. The vast majority of stolen cars result from people leaving the fobs within them. And 90 percent of the cars that are broken into are unlocked.

The commissioner outlined a series of new initiatives to combat crime, such as a gun suppression unit and a tactical vigilance team to patrol houses of worship, malls and other places that Ryder called “soft targets.”

Both Curran and Ryder emphasized that the criminal justice reforms enacted by the state last year, which removed cash bail for a long list of offenses, needed to be reformed. Ryder detailed cases of people going free after committing crimes and doing the same ones.

Previous articleMusic To Your Mouth: What To Eat At A Grammy Awards Viewing Party
Next articleBinghamton University Signs Articulation Agreement With Nassau Community College