At The Creation: The Making Of The Silent Majority

In the 2016 presidential campaign, the slogan “The Silent Majority” made a surprising comeback. First coined in the 1950s by Paul Douglas, a Democratic senator from Illinois, it was the backbone of Richard Nixon’s successful 1968 and 1972 presidential campaigns. And the man who gave Nixon the slogan has now published his long-awaited memoir of that doomed presidency.

Patrick J. Buchanan ruefully maintains that if Nixon had resigned his office in January 1973, he would be remembered as one of the great American presidents. Indeed, the America of 1972 was a far calmer place than the nihilistic America of 1968. The years in between were crowded with incident.

The barbarism of the Sixties marched into the new decade. Nixon and his conservative speechwriter were caught up in the turmoil of the times: busing orders, Supreme Court vacancies, Vietnam, the incursion into Cambodia, Kent State, to finally, 1969 and 1970, two years of sheer terror, when 40,000 home-grown terrorist bombings took place across America.

Irving Kristol once wondered if he had a neoconservative gene. Buchanan, then as now, might contemplate a lost cause gene. The young Pat Buchanan was an outlier in the Nixon White House. After losing his 1962 gubernatorial race in California, a defeated Nixon migrated to New York City, the metropolis that Nixon liked very much, considering it as the place “where the action is.” From Manhattan, Nixon plotted his improbable comeback. Once elected, the new president staffed his White House team with moderate New Yorkers: Henry Kissinger, Daniel Patrick Moynihan, William Rogers and John Mitchell. Buchanan manned the lonely “conservative desk.” Buchanan, as such, felt the frustration at experiencing the never-ceasing advance of the liberal revolution more keenly than others. For Buchanan’s is the voice of frustration. It also, for the past 50 years, has been the voice of resentment. Such disillusionment was dominant in the conservatism of the 1950s and ‘60s, and certainly during the New Deal era. Frustration and resentment on the right went out of fashion on Nov. 4, 1980. For Buchanan, defeat remains the story of the post-World War II right. The Nixon years saw the humiliating rejections of Clement Haynesworth and Harold Carswell to the Supreme Court. The eventual nominee, Harry Blackmum would go on to write the majority opinion on Roe vs. Wade. 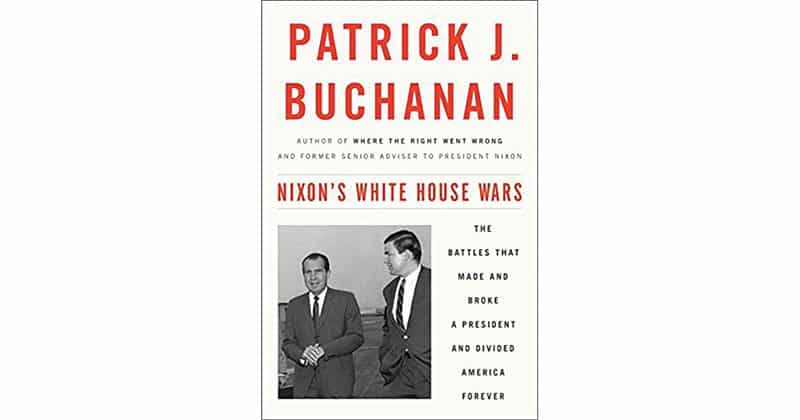 Buchanan has never forgotten such stinging setbacks. As he writes:

“Black folks stood up against segregation, engaged in civil disobedience to change the laws, found allies to fight beside them, and defeated it. Why did Middle America not resist the reverse discrimination against whites that followed? Why did Christian America watch the country be torn away from it and submit meekly, turning the other cheek?…They relied on the leaders they elected to stand up to the [Supreme] Court and overturn its usurpations. But the leaders would not pick up the challenge, and so Middle America lost the culture wars.”

The highlight of this dramatic volume is Buchanan’s association with Spiro Agnew. Agnew, even more than Nixon or Ronald Reagan, was Buchanan’s political soulmate. The two were made for each other: Buchanan, the witty and cutting polemicist and Agnew, the lion of Middle America who took great joy in taking on all comers. Both reveled in the politics of confrontation. The two combined for many a memorable broadside against an East Coast elite, most especially with Agnew’s legendary Des Moines, Iowa speech, one blasting the perceived bias of the “nattering nabobs of negativity” in Manhattan media board rooms. The Nixon years, then, represented not conciliation with liberals, but instead, a time of coalition building between two former New Deal constituencies: Northern ethnics and white southerners, that Archie Bunker/Jerry Falwell coalition that have served an unsuspecting (and undeserving) Republican Party well in numerous elections since 1968. Times have changed. In the 1970s, Middle America was not a geographic definition. It most definitely included Nassau County. In 1972, Nixon held a re-election rally in front of 15,000 cheering fans at the Nassau County Coliseum. “This is the biggest and best rally, Joe Margiotta, I have ever seen,” the president exclaimed, referring to the-then Nassau County Republican Party chairman.

It has been three decades since a GOP presidential nominee has even bothered campaigning on Long Island.

This book is yet another triumph for Pat Buchanan. Since the publication of his 1988 autobiography, Right From The Beginning, he has been the most exciting and daring author writing in the English language, tackling a broad range of nation-breaking issues: Free trade and economic decline (The Great Betrayal), the demise of Western Christianity and the resulting low fertility (The Death of The West), immigration, both legal and illegal (State of Emergency), a history of American foreign policy (A Republic, Not An Empire) and a withering critique of Great Britain’s blundering into two world wars (Churchill, Hitler and An Unnecessary War). The man rarely wastes a sentence. Every page on every book burns with serious-as-a-heart attack urgency. To read Buchanan is to know what it means to be alive in these waning days of the West.

Previous articleA Walk To Remember
Next articleChildren And Biting