Cracker: Playing Both Sides Of The Musical Coin 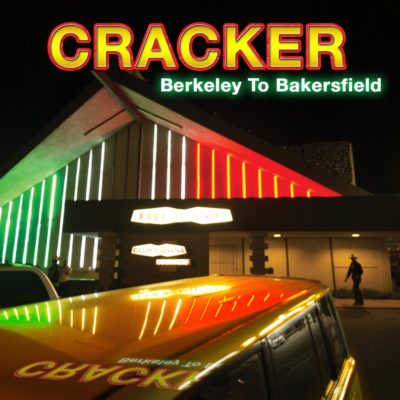 According to Google Maps, the geographic distance between Berkeley and Bakersfield, California is 276.4 miles. For David Lowery, it’s also two places influential enough to the sound of his band that Cracker’s most recent project is a 2-CD set entitled Berkeley to Bakersfield. The first CD crackles with guitar-driven alt-rock like the jangly “Beautiful” and its mention of pink mohawks and Doc Martin boots and the stomper “Life In the Big City.” Move on to disc two and out comes the pedal steel and fiddle whether it’s on the twangy “Almond Grove” and its banjo nuances or the honky-tonk shuffle “King of Bakersfield.” And while this combination may seem odd, it’s that combination of roots rock and country riffing that’s been a hallmark dating back to the band’s 1992 self-titled debut when Lowery’s guitar-playing creative partner Johnny Hickman juiced up songs like the defiant “Can I Take My Gun to Heaven” and anthemic “I See the Light” with riffs that pulsed with the influence of Bakersfield legends Buck Owens and Don Rich.

“The country thing is something that’s been around throughout our whole career,” Lowery explained. “So in 2004 we put out Countrysides as a way of paying homage to our roots in that way. In 2013, we thought it was time to touch on that again, so I started writing these songs that were largely sort of country-based, which was sort of the idea for the next Cracker record. It was going to be a sort of Americana record.”

Around this time, the Texas native had also been working with Michael Urbano, who not only played with Lowery in his former band Camper Van Beethoven, but also an earlier Cracker lineup. Joined by fellow CVB member Davey Faragher, the trio wound up with recording nine songs of original material that were distinctly different from the nine songs Lowery had started out recording for this project. It proved to be an interesting conundrum according to Lowery.

“[Berkeley] was this sort of three-day, songwriting demo session with me, Davey [Faragher] and Michael that’s not exactly perfect,” he recalled. “There’s a little bit of overlap but that’s basically what it did. When we listened to it back and compared these two batches of songs, they seemed different enough that they were two different albums. So that’s what we did—we turned it into two different sets of albums. It’s not something that we planned but it became apparent that it really explained who and what the band is. It sort of explains who our rock and country roots are.”

While Lowery has been pulling double-duty spearheading Cracker and Camper Van Beethoven, dating back to the latter regrouping in the late ’90s, he’s also developed an interest in using geography of his one-time adopted state of California to drive his most current wave of songwriting. More recently, it came via the most recent CVB albums, El Camino Real from earlier this year, which draws its inspiration from southern California and 2013’s La Costa Perdida, which is more about the northern part of the Golden State. But for Lowery, who is currently teaching a course on the economics of finance in the music business at the University of Georgia and is working on his long-delayed mathematics doctorate, his geographically-driven creative urges were actually stoked by authors Joan Didion and William Vollman.

“I’ve become fascinated with writers like Joan Didion,” Lowery admitted. “[She] wrote this wonderful book made up of essays on the grimy part of California called Slouching Towards Bethlehem about the end of an empire. And then I got fascinated by William Vollman who is a really hard-to-describe author. He’ll write a 1,300-page book that’s really a loose collection of long and elegant essays that spans 400 years that’s about the Imperial Valley of California, which is both in California and Mexico. So I wound up being fascinated by this writing style and I started out doing that with the Camper records. I looked at it as being our Didion phase. I haven’t taken this geography thing that far, but it’s definitely part of something that I’ve been thinking about for the last four or five years. The songs aren’t really about the geography. They are just excuses to tell other stories.”

Dichotomy has always been a way of life for David Lowery dating back to his days with Camper Van Beethoven, which he once described as being like, “a bunch of hippies from the English empire taking acid and making Appalachian folk music mixed with psychedelic rock.” Or having Cracker tread more of a rocking, Americana-flavored path just as grunge was blowing pop culture up. Such is the case with Berkeley to Bakersfield, which is a 2-CD set being released at a time when most artists are much less likely to release even a single disc in a world that seems to be trending more towards downloadable fare.

“With this album, it’s the political divide, which becomes a metaphor for the country and for myself,” Lowery said. “I’ve always felt myself the odd man out in the music business. I feel completely disenfranchised from politics yet I’m completely involved in them with public policy about songwriters and stuff like that. I think California represents that in this really great way. People think about it coast-to-coast as being all about hippies and vegetarians and Hollywood but at the same time, just drive through the Owens Valley sometime. It’s like being in Wyoming. There are herds of thousands of cattle out there and cowboys. You could be in a completely different time.”

And while the idea of a rock and roll star teaching a college level class seems radical, Professor Lowery doesn’t seem to think there’s much of a difference between educating the masses and his regular day job.

“To me, it’s the same thing as doing a show,” he pointed out. “You’ve got to plan what you’re going to do, make a setlist, get up in front of people and keep their attention for an hour and 15 minutes. What’s the [frigging] difference? The only difference is that the audience that I’m speaking to are considerably younger. And as far as I know, most of them are not drunk or high.”