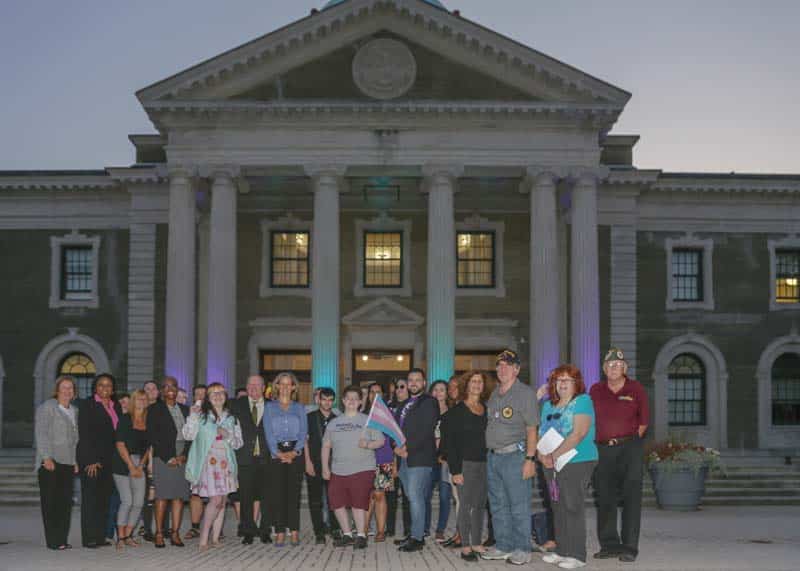 Nassau County Executive Laura Curran held a dome lighting on Sept. 10, World Suicide Prevention Day, to raise awareness on suicide and suicide prevention. At the event, Curran was joined by Legislator Arnold Drucker, Nassau County Police Commissioner Patrick Ryder, Nassau County Sheriff Vera Fludd, as well as representatives from the LGBT Network, Long Island Crisis Center, LI Suicide Prevention Coalition, YES Community Counseling Center, Pride for Youth and others to discuss the issue, revealing the latest statistics as well as sharing useful resources to help people in need and to help those who have been affected by suicide.

Each year, more than 41,000 individuals die by suicide. The month of September is National Suicide Prevention Awareness Month a time to shed light on a topic that is painful and difficult to discuss.

“In Nassau County, we want to raise awareness about suicide as well as share resources to help people in need and to the help those who have been affected by suicide,” said Curran. “September is Suicide Prevention Month and is helping spark this dialogue about this difficult topic, it’s important to keep this conversation going so we can make sure those suffering know they are not alone and that there is support available.”

Statistics show that suicide is a widespread problem, affecting all ages, genders, economic statuses and ethnicities. Suicide rates in the United States have increased nearly 30 percent since 1999. In New York specifically it rose 28.8 percent between 1999 through 2016. From 2014-16, 292 people in Nassau County died by suicide.

“Lighting the dome in honor of suicide prevention month is so critical to help spread the word about actions we can all take to prevent suicide. Engaging and educating health professionals and the general public about suicide prevention and warning signs of suicide will help to save many lives,” said David Kilmnick, president and CEO of the LGBT Network. “LGBT youth attempt suicide at rates three times higher than their heterosexual peers and we couldn’t be more thankful that Curran has stepped up to the plate to shine a light on this critical issue that will help countless number of families.”

“In 2017, there were over 47,000 deaths by suicide in the U.S. While this number is staggering, the good news is that by having conversations and raising awareness, we can prevent suicides and save lives. Long Island Crisis Center is available 24 hours a day, 7 days a week to speak to anyone who may be thinking about suicide or who may be concerned about a loved one that may be suicidal,” said Theresa Buhse, executive director of the Long Island Crisis Center, and member of LI Suicide Prevention Coalition. “Every year we continue to lose members of our community to suicide. Those whose lives are affected by these losses are often devastated by the aftermath of losing a friend, co-worker, neighbor or a loved one. Standing together we can prevent these tragedies by offering hope, resources, and support to those who need it most,” said Jamie Bogenshutz, Executive Director, YES Community Counseling Center, Secretary, LI Suicide Prevention Coalition. “No one needs to be alone; as we commemorate Suicide prevention month and every day, we will stand united in those efforts.”

Aiden Jay Kaplan, Pride for Youth, LGBTQ Youth Services Manager noted that lesbian, gay and bisexual youth contemplate suicide at almost three times the rate of straight youth. In addition, 40 percent of transgender adults report having made a suicide attempt, 92 percent of which reported having attempted suicide before the age of 25.

“Pride for Youth opened its doors 26 years ago in response to Long Island Crisis Center observing an increase in calls from suicidal LGBTQ young people with nowhere to go for support,” he said. “Today, PFY provides many lifesaving services to LGBTQ Long Islanders. This suicide prevention month, Pride for Youth is proud to stand with Long Island Crisis Center and Nassau County to bring awareness to the disproportionate number of LGBTQ youth who are impacted by suicide each year.”

Nassau County offers many resources for those who are struggling including a 24/7 confidential helpline at 516-227-8255. For more resources and information visit www.nassaucountyny.gov/SuicidePrevention.

Previous articleTrending: Golds And Gemstones
Next articleRacing For The FDNY