If you happen to see Adam Duritz around, the surest conversation starter to go with is to ask him about his chili verde recipe. The pandemic found the Counting Crows frontman hunkering down in New York City with his girlfriend and significantly upping his cooking game. And then there’s the release of Butter Miracle: Suite One, an EP that is the first Counting Crows release since 2014’s Somewhere Under Wonderland (but more on that later).
For the former California resident, culinary pursuits, both in and out of the kitchen sustained him over the past year and a half.
“I was reading a lot of cookbooks and spent time researching recipes versus stuff for my podcast, which I couldn’t do,” he explained. “I learned to cook a lot of different stuff. A lot of my friends are Italian from Providence and from Queens—years ago, their grandmothers and them taught me a lot about Italian cooking and I improved my red sauces. But I worked a lot more on that during the pandemic. I learned Chinese food, Thai food and trying to do things like briskets and ribs in an oven, because you can’t do a smoker here [in the city].I really improved my different kinds of stocks and soups, because those are useful in cooking lots of stuff, so it’s good to be able to make a good stock. I worked on that. My best dish might be this chili verde that I make with pork or chicken, which is pretty outrageous. I’m working on getting into some Brazilian stuff, but that’s a little harder.” 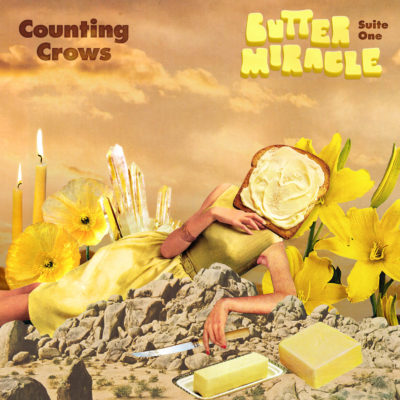 Inspiration for Butter Miracle: Suite One came to Duritz during a trip with his girlfriend to visit a friend’s farm in the western English countryside. Not having written any music for quite some time, the singer-songwriter was inspired enough by his rural surroundings and occasional solitude to have a rent drive a rented keyboard up from London. Before long, the seeds were planted for one song to evolve into a four-track suite that led to his extensively working with Rochester-based Dave Drago to flesh out this radical idea over Zoom and the phone.
“I started working and a couple of days later I wrote ‘The Tall Grass,’” Duritz recalled “The day after that, in experimenting with the ending, I was playing with different things and seeing if I wanted to make it a longer song. I thought I was writing another movement for that song and then I ended up realizing that it was the start of a different song and that ended up being ‘Elevator Boots.’ At that point I thought it was really cool how it flowed out of ‘Tall Grass.’ There’s no break there. It’s so connected that actually at first, I thought I was writing a longer version of that song. Then I thought about what It would be like if I wrote a series of songs where the end of one is the beginning of the next and then they’re all connected. It would be four different songs that flow like one long song. I got really excited about doing that because it seemed like such an interesting challenge.”

While this quartet of songs has the character-driven flow of people and specific places that have become hallmarks of Counting Crows’ best material, compositional nuances reverberate with a subtle nod to the glam influences of vintage David Bowie, Mott the Hoople and other artists from that era. While Duritz admits to these influences, he’s quick to point out that it’s less about sounding like someone else and more about filtering how they resonate with you.
“I don’t know that I was listening to [any glam] right then, but it was in my head—especially ‘Elevator Boots’ and some of that stuff where I wanted to have those Mick Ronson-ish guitars,” he said. “I love that kind of Mott the Hoople, Hunky Dory, Ziggy Stardust kind of feeling it gave those songs. That’s how I think influences really work. You think about the way a kind of period had a sort of emotional effect on you and then you try to make that effect happen. And not necessarily by playing like them but sort of give it some flavor. It was certainly in my head. As soon as I started writing ‘Elevator Boots,’ I was sort of textures. I think you can hear that on ‘Elevator Boots’ and especially on ‘Bobby and the Rat-Kings’ too, where I was thinking of Phil Lynott/Thin Lizzy [characters like] Johnny the Fox and Jimmy the Weed—Thin Lizzy.”

Duritz gives plenty of credit for Butter Miracle’s crunch and anthemic swagger to Drago and Seán Barna, who is opening for the Crows on this current tour. Sharing this latest creative turn with fans in a live setting is a major priority for Duritz, although the current state of the post-pandemic world has been raising major concerns for him.
“As always, [fans] can expect a really passionate show because we’re only going to play the songs we really want to play that night,” he said. “The thing I’m really determined to do on this tour is play the suite all the way through. I don’t know where to put it in the show yet. I’m going to have to figure that out but that’s the big thing. All of this is really dependent on things not going completely haywire with the way things are right now. I pray that’s not the case. When I planned this tour, I moved all the gigs outdoors except places like New York, where I felt safe playing indoors. It seemed like a good plan and with the vaccine and cases dwindled every week for months until all of a sudden they’re going through the roof again. I just want to make sure that we’re safe for people.”

As for the second part of Butter Miracle, Duritz is still working his way through the compositional stage.
“I recently came back from the farm where I was through the month of June and July,” he said. “I wrote four more songs that I think are going to be a second suite, but they don’t exist yet. If we go into the studio in the winter and record the songs and finish that before we start touring in the spring, then maybe it could be out during summertime or fall. But there’s a lot of time in-between all that.”