Cosmos To Retire Chinaglia’s #9 On Sunday 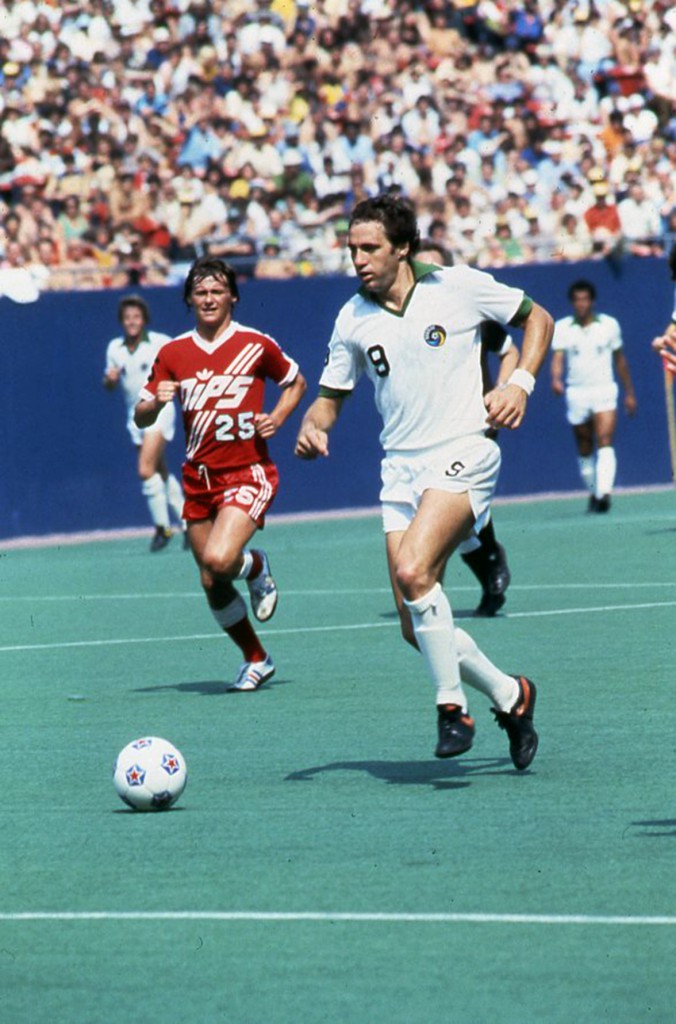 Since the New York Cosmos were revived last year, they’ve connected with fans who remember the Cosmos of the late 1970s and early 1980s, which included superstars such as the late Giorgio Chinaglia (1947-2012).

Playing alongside Brazil’s Pelé and Germany’s Franz Beckenbauer, Chinaglia, who made his name in Italy, won four titles with the Cosmos, and retired in 1983 as the North American Soccer League’s (NASL) all-time leading scorer with 243 goals, according to the Giorgio Chinaglia Foundation.

The Cosmos will retire Chinaglia’s number nine jersey prior to its 5 p.m. game against the Ottawa Fury on Sunday, June 8, at Hofstra University’s Shuart Stadium. Chinaglia’s three children from his first marriage—Giorgio Jr., Cynthia and Stephanie Chinaglia—will be in attendance.

Building on its storied past, and following a nearly three-decade hiatus, the Cosmos returned to the NASL in 2013 and proceeded to win the sixth NASL championship in the club’s history. The 2014 Cosmos had a record of 4-2-1 immediately after Memorial Day weekend, a sign they’re still a force to be reckoned with as they defend their title.

“Our first goal going into the off-season was to keep as many of the core players as we could,” said Erik Stover, the Cosmos’ chief operating officer. And, when they were unable to do so, the Cosmos promoted from within.

“Jimmy Maurer’s been playing great; he only gave up two goals in our first six games,” Stover said, in reference to the Cosmos’ starting goalie this season, who succeeded 2013’s starter, Kyle Reynish, after Reynish signed with the Major League Soccer’s (MLS) Chicago Fire. “We always felt we had two number ones, really,” Stover said.

“Like any team, you’re always looking to get better,” Stover said, pointing to two of the Cosmos’ higher-profile off-season acquisitions, forward Hans Denissen, a Dutch native who played last year for the NASL’s San Antonio Scorpions, and Mads Stokkelien, another offensive threat who signed with the Cosmos as a free agent after playing professionally in his native Norway. Denissen has been sidelined to date with an injury.

There is local talent on the roster, too. Carlos Mendes, the Cosmos’ team captain, played for Wheatley High School in Old Westbury before catching the attention of pro scouts at Old Dominion University in Virginia. Mendes, a defender, played professionally for seven seasons in the MLS and, in late 2012, was the first player signed by the re-booted Cosmos. Other Long Islanders on the team include 22-year-old Jimmy Nealis, a standout at Massapequa High School and Georgetown University, and midfielder Jimmy Mulligan, who hails from Medford, and starred at St. John’s University between 2009 and 2013.

With 2014’s upcoming World Cup likely to generate interest in U.S. soccer, the Cosmos could see a boost in attendance this summer, when they play four home games at Hofstra against San Antonio (Sunday, July 12), the Carolina Railhawks (Saturday, Aug. 2), FC Edmonton (Wednesday, Aug. 6) and Minnesota United FC (Saturday, Aug. 23). They had nearly 8,000 on their Opening Night back in April, but have seen attendance dip since then.

Demonstrating professional soccer’s broad appeal is essential for the team as it awaits the state Empire State Development Corporation’s decision on a Cosmos proposal to build, with private monies, a multi-use complex that includes a soccer stadium and commercial space for retail and restaurants in Elmont, south of Belmont Park. “We’re confident that we’ve submitted the best bid,” Stover said. “There’s no taxpayer money involved.”

The Long Island Rail Road’s (LIRR) Belmont Park station is a short walk from where the Cosmos want to construct a permanent home, and the parcel is easily accessible by car from the Cross Island Parkway, too. More details are at www.cosmosstadium.com.