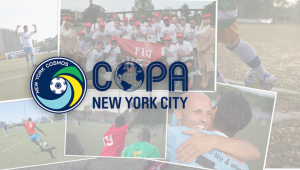 While the FIFA World Cup is taking place in Brazil, the New York Cosmos will be having their own local World Cup, starting on Saturday, June 28. The 2014 Cosmos Copa kicked off at Randall’s Island, with games taking place all day Saturday.
The Cosmos Copa features 32 amateur local teams competing for their nationalities. Teams representing all parts of the world begin their quest toward the title, as only eight out of the 32 teams will make the tournament.
The field of 32 includes teams representing every part of the world, including soccer powers such as Spain, Argentina, Brazil, and Mexico. Other teams on the field this Saturday include Burkina Faso, Zimbabwe, Afghanistan, Ukraine, and Turkey, among others.
The games will be taking place at the East River Field, on the southern end of Randall’s Island, right next to the 103rd St. pedestrian bridge. The venues will progressively get larger from there, with the quarterfinals and semifinals taking place at Flushing Meadows Park in late July. Ultimately, the championship game will take place at Hofstra University on Aug. 2.
For more information, visit NYCosmos.com