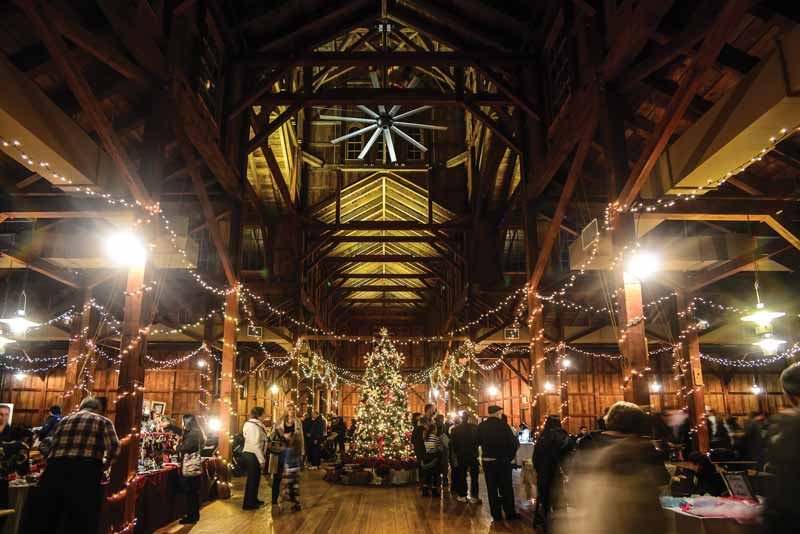 On four evenings in December—the 15th, 16th, 17th and 18th from 5 to 9:30 p.m.—Old Bethpage Restoration Village presents Candlelight Evenings, a time to experience Christmas in America as it might have been celebrated in the mid-1800s with homes lit by candlelight, fiddle music, contradancing, a bonfire and hot apple cider.

Christmas back then was not as grand an event as it is now and the village is decorated in keeping with the times with simple garlands and wreaths. There is but one tree in the village, tucked away in Layton House.

“People weren’t as concerned with decorating,” said Lindsey McKeever, museum associate in charge of event coordinating and programming, “and the décor was minimal.”

Old Bethpage Village Restoration is a recreated museum village with costumed actors giving a glimpse of life on Long Island in the 19th century and answering questions from the visitors. The village, located on the Nassau-Suffolk border, was established in 1963, beginning with one original building on the property, the Powell Farmhouse.

Thomas Powell established himself on Long Island in 1695 with the purchase of 10,000 acres from the Marsapeque, Matinecoc and Sacatogue peoples who occupied the land. He named this tract of land, measuring 3.5 miles east to west and five miles north to south, Bethphage after the biblical Bethphage as both were situated between towns called Jericho and Jerusalem. Jerusalem ultimately became Wantagh and Island Trees and eventually the second ‘h’ was dropped from Bethpage.

The rest of the 58 buildings of the Restoration Village were brought to the site from other locations and arranged to simulate a typical mid-19th century farming community. During the Candlelight Evenings, as visitors walk through the village they will come across activities such as story-telling of Christmases past and Civil War Era Christmas songs. There’s lots of music in many of the houses as well as a holiday brass quartet.

The contradancing takes place in the fairgrounds exhibition hall on Saturday and Sunday. Contradancing is a folk dance made up of long lines of couples facing each other. A caller, who teaches the sequence of figures before the dance begins, calls out the steps as couples progress up and down these lines.

“Everyone smiles during the dancing,” said McKeever. “They teach you and the volunteers ask people to dance with them.”

You might want to bring a flashlight or oil lamp to show you the way through the candlelight village. But you should do fine if you just follow the music.

Old Bethpage Village Restoration is located at 1303 Round Swamp Rd. in Old Bethpage. Visit www.obvrnassau.com or call 516-572-8400 for more details.