While he found enormous commercial success alongside his younger brother Rich in The Black Crowes, personal dynamics within the band, coupled with the expectations fueled by corporate music industry interests, had the Crowes fracturing and coming back together before announcing its dissolution in 2015. For the elder Robinson, the Chris Robinson Brotherhood (CRB) has been a musical back-up plan that he’s been happily toiling away at since if formed in 2011. While driving across the “alien flatness of the landscape” that is the Midwest no the way to a gig in Omaha, the Georgia native admits the quest for creative self-satisfaction on his terms were a big part of how he happily wound up in his present musical situation.

“I think the whole point is that you have to be sensitive when you’ve had commercial success. How I feel in my soul has nothing to do with the thanks and gratitude to the gift I’ve been given because of that. But the other part of it is as you get older, you start asking yourself who you’re working for. I’m still passionate about music and life and part of music to me is if there is any spiritual practice to be found in it, it’s [got to be] a place where you’re trying to live in the present as much as you can,” he said. “As time goes on, I’m super-happy and comfortable with the CRB. I’m writing all these songs that don’t sound like what I’m famous for singing. They’re not hard rock riff-oriented songs and it’s not a band with this rigid [approach] where everybody was wanting to suck as much money out of it as possible, which was really disappointing to someone like me.”

What started out as a loose string of dates played during a California residency tour coalesced into the CRB.

“I had this music and the songs were piling up. Adam MacDougall and I were on the Black Crowes tour together during those last few years in dressing rooms and hotel rooms with guitar and piano putting together a little repertoire of songs. We did this knowing that the Black Crowes were this dysfunctional weird thing, which was nothing new,” Robinson recalled. “So it was a pragmatic thing too. I wanted to get out and do something new and different. I’m a different person. I wanted my presentation to be different. Luckily we got in with a group of people and made a sound that we liked and we can exist in our little utopian music bubble and make this music and not have to be too interested and too concerned with promotional or corporate things. We know what we’re doing but we also know what would we do if we worked with some cool producer. We’re not a corporate band. We’ve all done hundreds and hundreds of gigs and done millions of hours in the studio as a collective group. This is a group of people that love music and I think that’s our fuel.”

The CRB is currently out on the road in support of 2017’s Barefoot In the Head. For Robinson, the CRB’s fifth full-length studio album was a chance to get a little rootsier with the material he was penning while on tour.

“I just had my acoustic guitar and these more folky/country [tunes] and that was the idea. When we went in to make Barefoot in the Head, I didn’t want any instruments that we used before or anything that we played on tour,” he said. “We had different amps and guitars and I wanted us to play a lot of acoustic instruments. But I’m very lucky because Tony [Leone] is a good mandolin player. Neal [Casal] plays a myriad of acoustic instruments and Jeff [Hill] as well. We were able to have a lot of texture and color that way.” 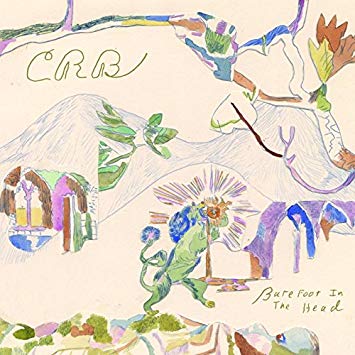 The end result is a nod to the late ‘60s/early ‘70s Americana of Manassas, Poco and Buffalo Springfield. The dreamy psychedelia of “Glow” with its sitar nuances shares space with funky opener “Behold the Seer” and its generous helpings of clavinet and wah-wah guitar and the romantic “She Shares My Blanket,” which benefits from a wistful vibe fueled by some saloon-flavored piano runs and a few dollops of pedal steel. Elsewhere, “High Is Not the Top” is a snappy, old-timey romp that bounces buffeted by banjo and harp while “Hark, the Herald Hermit Speaks” has an ethereal quality to it thanks to the cascading keyboard fills and fuzz guitar that jolts the song along. The inspiration for all of this was enough that CRB has another album in the can set to drop in 2019. But for now, playing live is the band’s main concern and one that concert-goers will get to enjoy on a high level if the group’s namesake has anything to say about it.

“What I’m most proud of is that [seeing us play live is] a very positive and welcoming [experience]. CRB is a fun band. We’re songwriters and that’s our craft, but the thing is how do you do that and keep everyone dancing? We get to throw in a few sad ones, here and there. But that’s what we do, man,” Robinson said. “I think when it’s at its best, if you’ve never been to California, you’ll know what Saturday night at the Fillmore Auditorium in San Francisco feels like. That’s what we kind of shoot for, where everyone is involved.”

The Chris Robinson Brotherhood will be appearing on July 27 at Stereo Garden, 9 Railroad Ave., Patchogue. For more information, visit www.stereogardenli.com or call 631-714-4486.